Jun Wang, professor of chemical and biochemical engineering at the University of Iowa, is trying to create a mechanism to have exact measures of air pollution and fine particles. 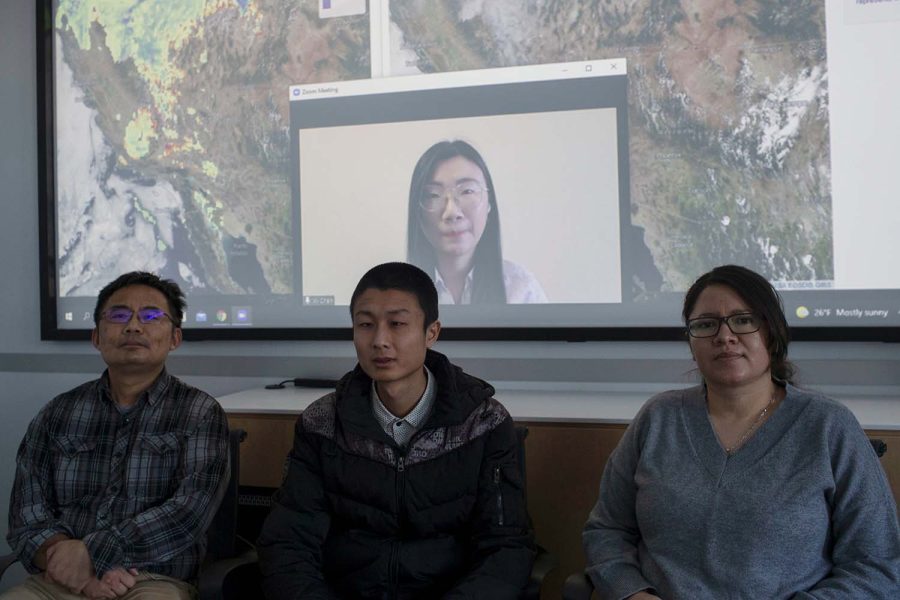 Professor Jun Wang, Lorena Castro García, Xi Chen, and Zhendong Lu pose for a group portrait before their work on the projector. The projector depicts their California wildfire smoke elevations.

A University of Iowa professor is working to improve measurements of aerosol in the air to assist researchers in understanding the effects of air pollution.

Jun Wang, UI professor of chemical and biochemical engineering, received a $200,000 grant from the National Oceanic and Atmospheric Administration, which will sponsor the research. Wang will collaborate with the administration’s scientists on his research.

Wang said there are a lot of fires in the western region of the U.S. that tend to generate a lot of heat, causing smoke particles to settle in the planetary boundary layer — or lowest part of the atmosphere.

“By releasing the heat, fire increases air temperature, which eventually makes the air carry lots of smoke particles upward,” Wang said. “After that, smoke particles get carried by the wind and can be transported to the Midwest region.”

Wang said if the particles were to enter people’s lungs, they would stay there permanently.

It is not recommended for people with asthma to go outside during windows of poor air quality, Wang said, because it can exacerbate their symptoms.

Wang said his team is currently in the formulation phase of the research. If the project goes well, it could last up to 10 years.

Wang’s team has a UI website with a map displaying the absorbance aerosol optical height, a measure of aerosol in the atmosphere, that is captured from the TROPOspheric Monitoring Instrument using the UI’s AOC-O2AB algorithm, a system established at the UI to calculate aerosol from the instrument.

The instrument applies information from Oxygen-A-Band, the brightest emission features observed in the visible and near infrared region of the airglow spectrum, and the short-wave infrared spectral range for monitoring the quantity of methane in the Earth’s atmosphere.

Xi Chen, a postdoctoral research scholar who works with Wang at the UI Atmospheric and Environmental Research Lab and the Gomes Lab, said her and other researchers collect data from NASA or the European Space Agency websites.

Then, the team uses that data to test and develop their algorithm to retrieve aerosol layer height information necessary to develop better mechanisms of measurement.

“After the service agencies, such as NASA, receive satellite data, they will transfer that data to their websites,” Chen said.

Lorena Castro Garcia, assistant research scientist at the UI’s Atmospheric and Environmental Research Lab, said although the algorithm is displayed on the website, the data cannot be downloaded.

“For now, we share the data only with our collaborators, while the data is displayed to anyone via the web interface,” she said.

Garcia said in the future, they plan to make public, downloadable results.

Wang said this research is important because of the vast number of seasonal fires that mainly occur in the midwestern region of the US.

“[We] don’t want our kids and our senior people to get exposed to the smoke particles,” Wang said.