The Division of Diversity, Equity, and Inclusion at the University of Iowa has announced two name changes to the Center for Diversity and Enrichment and the Diversity Resources Unit to better reflect the programs, services, and amenities offered by these centers. 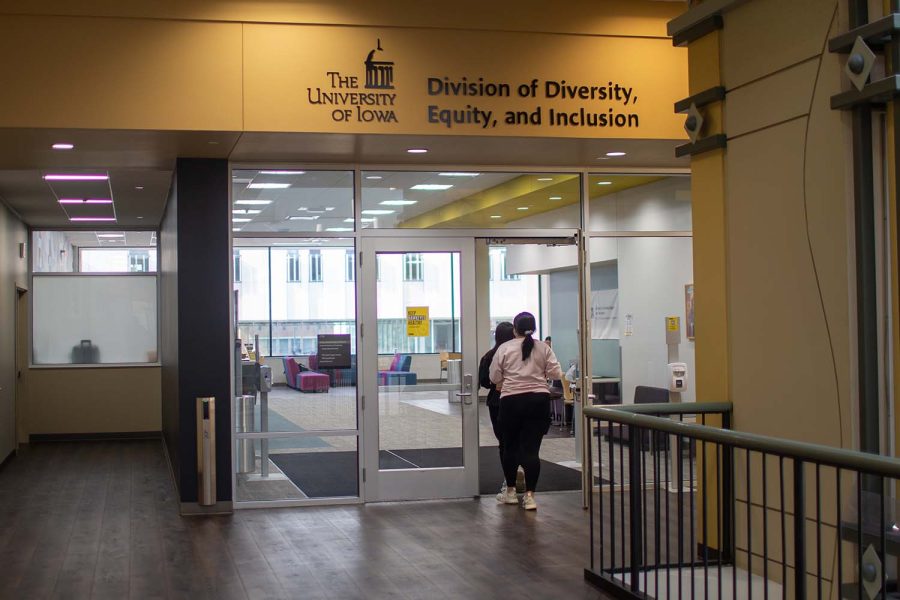 The University of Iowa Division of Diversity, Equity, and Inclusion offices on Thursday, Feb 3, 2022.

Two prominent programs in the University of Iowa’s Division of Diversity, Equity, and Inclusion have undergone name changes this spring.

The Center for Diversity and Enrichment will now be referred to as the Center for Inclusive Academic Excellence, and the Diversity Resources Unit has now become the Inclusive Education and Strategies Initiative.

By changing the names of these two centers, the department hopes students will be better informed about the services and the amenities offered by them.

Charlie Taylor, communications director of the Division of Diversity, Equity and Inclusion, said the changes were made to help incentivize students to take advantage of those services.

As of now, Taylor said, the division is not planning on changing the names of any other services, programs, or centers they offer.

UI undergraduate Zoe Dervin said she finds comfort in the programs the division offers but thought the name changes were not going to expand the benefits she enjoys.

“I don’t know if a name change alone would make enough change,” Dervin said. “I think I’m neutral on it personally, because I don’t necessarily think that it’s harmful.”

Paras Bussuk, a UI first-year student who uses the division’s study space in the Old Capitol Town Center and other resources frequently, agreed with Dervin.

Taylor said the name changes were suggested by Liz Tovar, executive officer and associate vice president of the division.

“She identified a need to more clearly communicate the institutions’ DEI efforts,” he said. “The new names better convey the specific services of each unit, leading to better understanding and increased engagement with our students, faculty, and staff.”

The idea for the name change began in April 2021, when the Office of Sexual Misconduct Coordinator, the Office of Equal Opportunity and Diversity, and two investigators of the Office of Student Accountability merged to form one joint operation, now known as the Office of Institutional Equality, Taylor said.

“For students of diverse backgrounds, the Center for Inclusive Excellence provides academic coaches and programs to enhance the cultural, social, and academic Hawkeye experience,” Taylor said.

The Inclusive Education and Strategies Initiative operates under an emulation of the Center for Inclusive Academic Excellence’s mission for a more inclusive environment at the UI. The services are ever-changing, as the initiative strives to support a multitude of identities on campus.

“The choice to call our office ‘Diversity Resources’ was purposeful and fitting for the work we were doing,” said Brianna Marcelo, director of the Inclusive Education and Strategies Initiative. “Just like most new offices, the demand and need for our services changed over time, including the expansion of educational opportunities as well as coordination of campus-wide strategic efforts.”

Regardless of the name changes, students say they still find comfort in these centers’ services and both Dervin and Bussuk said they feel it’s important these services are shared with the campus