Clark and Hillmon, frontrunners in the 2021-22 Big Ten Player of the Year competition, lead their respective teams in scoring on Sunday. 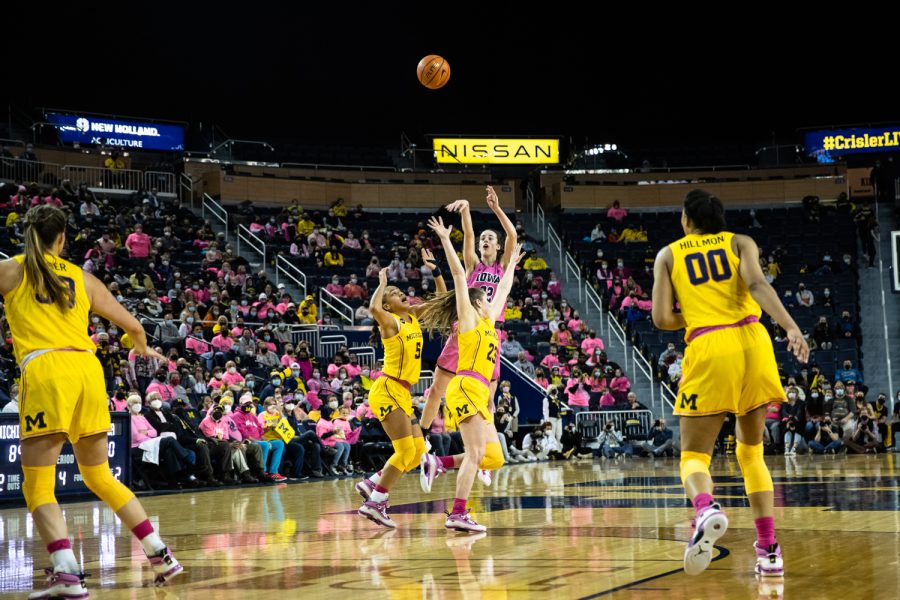 ANN ARBOR, Mich. — Iowa’s Caitlin Clark and Michigan’s Naz Hillmon matched up on Sunday in a battle of the 2021-22 Big Ten Women’s Basketball Preseason Co-Players of the Year.

The then-No. 6 Wolverines ultimately downed the then-No. 21 Hawkeyes, 98-90, at the Crisler Center in Ann Arbor, Michigan.

But Clark’s 25-point effort in the fourth quarter, including multiple 3-pointers from Michigan’s ‘M’ logo, was something the Wolverines didn’t expect.

Clark broke through double and triple-teams in the final ten minutes of the game to go 8-of-10 from the field, including 4-of-5 from the 3-point line.

“I mean, I just didn’t even know what the heck was going on,” Michigan head coach Kim Barnes Arico said of Clark’s fourth-quarter performance. “I’ve coached for a long time and that was some display. I mean, she dribbled it one time over half court and she shot the ball from half court. It was pretty ridiculous for sure.”

Clark, the reigning Big Ten Freshman of the Year, had a career-high 46 points against Michigan on Sunday. She scored over half of Iowa’s points, propelling the Hawkeyes from a 25-point deficit late in the third quarter to within single digits of the Wolverines in the final seconds.

“We’ve been watching her, trying to scout her,” Hillmon said of Clark postgame. “She’s a tough competitor, so walking into that game we knew we weren’t going to hold her to zero unless we got her on the bench with fouls.”

But even with Clark, Iowa couldn’t overtake Hillmon and the Michigan women’s basketball team.

Hillmon, the reigning Big Ten Player of the Year, bucketed 26 points on Sunday night, leading the Wolverines. But her ability to clean the offensive glass overwhelmed the Hawkeyes — Hillmon had 10 total boards, including seven offensive rebounds.

Overall, Michigan heavily outrebounded Iowa, 44-27, and the Wolverines had a 16-11 advantage in offensive boards.

Clark has a nation-leading five triple-doubles in the 2021-22 season, along with 12 double-doubles. She leads the Big Ten with 27.4 points and 8.2 assists per game.

Hillmon has 10 double-doubles in the 2021-22 season. She is fourth in the conference in scoring with 20.5 points and fifth in the league with 8.8 rebounds per game. She is second in the Big Ten field goal percentage — behind Iowa senior center Monika Czinano — at 58.4 percent shooting.

“She’s always spectacular,” Iowa women’s basketball head coach Lisa Bluder said of Hillmon. “Naz is just an incredible player. She’s so quick to get her shot off and her team finds her. They know how good she is and they really hunt for her. And what’s impressive is how she rebounds. I mean, to me, that is what’s really impressive — Naz’s offensive rebounding and ability to put back and drop draw fouls.”

Clark and Hillmon will meet again when the Hawkeyes take on the Wolverines on Feb. 27 at Carver-Hawkeye Arena. Tip is set for 4 p.m.