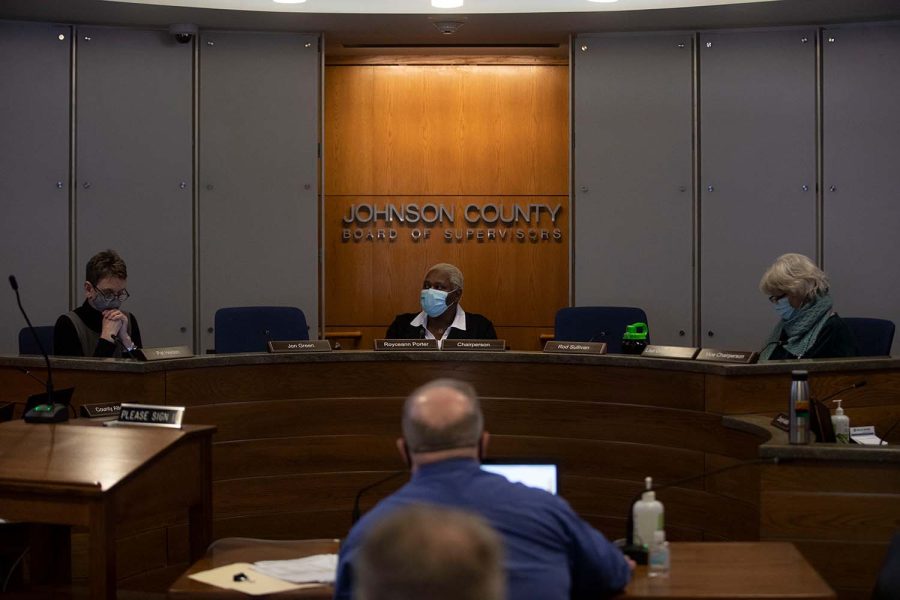 Chairperson Royceann Porter listens to chairperson Pat Heiden during a Johnson County Board of Supervisors in Iowa City on Wednesday, Jan. 18, 2022.

The Johnson County Board of Supervisors has approved reducing the potential salary increases for themselves and other elected officials, changing the proposal from 18 percent to 2-5 percent.

During a work session on Wednesday, the board unanimously agreed to lower the 18 percent salary increase for all elected officials set by the Johnson County Compensation Board on Jan. 20.

The County’s Compensation Board recently recommended raising the pay of elected officials to 18 percent, saying the raise would make the county more competitive and keep up with the cost of living.

Supervisors Rod Sullivan, Pat Heiden, and Jon Green approved lowering the 18 percent to 2.25 percent for supervisors, and 4.42 percent for all other elected officials, including the county’s attorney, sheriff, auditor, treasurer, and recorder.

Supervisor Lisa Green-Douglas supported a 4.42 percent raise in salary for all elected officials including the supervisors.

The rest of the elected official’s salary would be:

Sullivan said when officials are elected in Johnson County, they rarely try to look for positions elsewhere. He said having a significant raise in salaries sends the wrong message. Sullivan has been on the board since 2004.

“I don’t think that elected officials, with all due respect to all of us, have done anything particularly special any more so than any other county employee, and I think that [salaries] should all be the same,” Sullivan said.

Washington County’s compensation board in December voted unanimously on raising the pay of all elected officials by 20 percent, and 35 percent for the sheriff.

Elected officials in Johnson County have never had more than a 10 percent increase in wages since 2010, according to the Iowa State Association of Counties’ salary survey.

Green said all other elected officials should be treated and compensated the same.

Sullivan said he has not noticed an unwillingness in people to run for supervisors positions in Johnson County and noted that the job pays better than it did before.

“People seem to want the job still, it doesn’t have to be tied to the other elected officials, and we’ve added so many staff in the last 10 years that the job has changed,” he said. “Frankly, the job is just a lot easier now that there’s this robust communications staff for example, and things like that.”

The board is set to vote on officials’ pay and the fiscal year 2023 budget in March.