Leaders of Dance Marathon 28 made the decision to move the big event mostly online again because of high COVID-19 cases, and will plan hybrid events for participants. 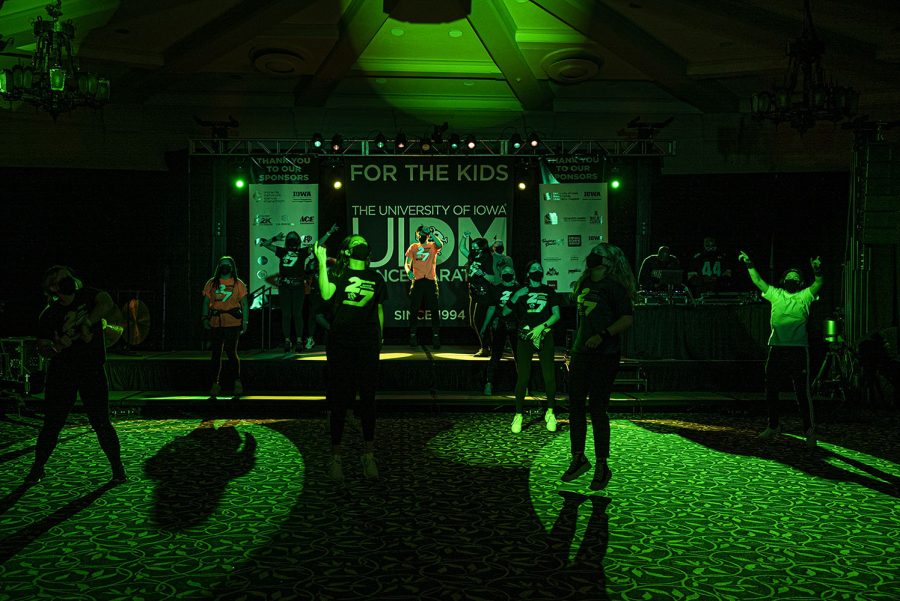 The University of Iowa’s Dance Marathon is preparing for its 28th “Big Event” this week, which the leaders of the organization opted to move online on Jan. 12.

“We just had to make the decision that it’s not safe for us to have a gathering of that size,” Anna Dodge, executive director of Dance Marathon 28, said.

She said the original plan was to have the event in person; however, with the spike in Omicron COVID-19 cases, it just wasn’t worth the risk.

“We made the announcement public on our Instagram and let our families know, our sponsors know, and our community partners,” she said. “Just so that everyone could make that pivot as cleanly as possible.”

2022 is the second year that Dance Marathon will be held virtually, Dodge said, and in general, Dance Marathon’s numbers are declining due to the virtual events.

“You look at our tote board, and it is lower than previous in-person years,” she said. “I think that not only reflects the virtual landscape of the event, but also just the past two years have been incredibly difficult for people to take on extra things.”

Dodge said there are approximately 1,200 participants this year for the big event. There will be hybrid options for specific groups during the event, though, she said.

“We have a couple of different opportunities for small groups to attend the Iowa Memorial Union to attend different portions of the big event,” Dodge said.

She said the dancers involved in the hybrid options will be chosen based on their interactions throughout the year, their fundraising dollars and how much they have participated.

There will also be leadership in the IMU throughout the event, Dodge said.

“Some members of leadership come in for a little bit just to do their different tasks to make the online event happen,” she said.

In an email to The Daily Iowan, Senior Associate Director of Event and Facility Operations at the Iowa Memorial Union Cory Lockwood wrote the capacity limit was decided by multiple groups including Dance Marathon.

“Dance Marathon student leaders worked with leaders in the Division of Student Life and UIHC to determine a capacity in the Iowa Memorial Union for the Dance Marathon 28 Big Event,” he wrote. “Considering that this group works in support of a vulnerable population, they chose to limit the number of individuals who would be in person at any given time over the course of the event, moving the majority of participation to a virtual format.”

“We’re allowed to have about 100 people in the whole space,” she said. “So we’ve actually got different leadership members on the third floor, putting on Zoom calls and on the second floor, interacting with dancers and our camera people and stuff on the mainstage.”

Dodge said she doesn’t know what the final total will look like this year but people are still fundraising.

“I don’t know exactly how it will look,” she said. “I know that people are still fundraising, money is still coming in, and we’re still really working on those fundraising efforts. It just kind of depends on how our last week goes and everything like that. But, we’re obviously still pushing for donations and still actively seeking donations.”

While the decision to move online was difficult, Dodge said Dance Marathon is still excited for the event.

“Everyone’s really stepped up and decided that no matter how this event puts on, they’re still excited to support our families because that’s what they need,” she said.