After returning from the COVID-19 shutdown, the University of Iowa’s cheer and dance teams are keeping some of the changes they made earlier in the pandemic, including online tryouts. 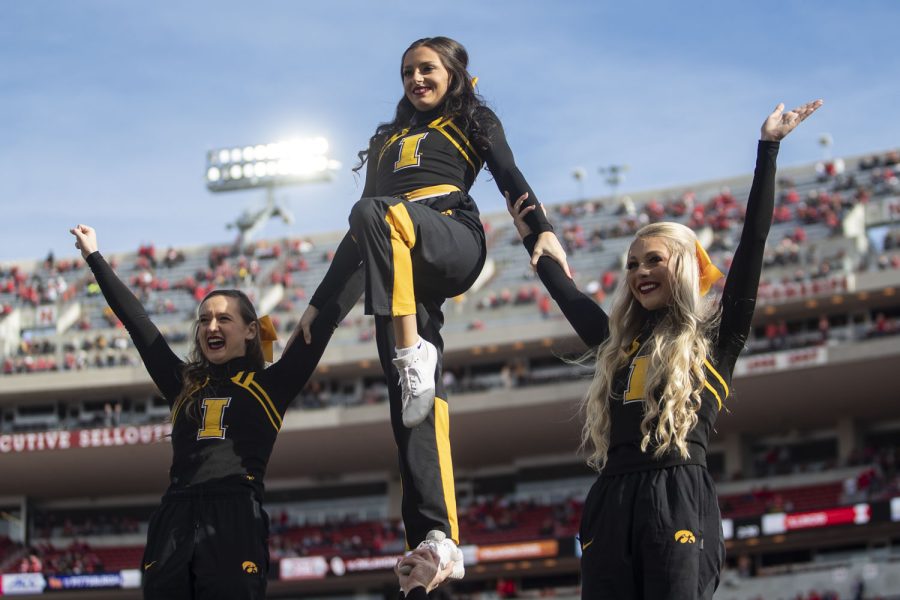 The Iowa Spirit Squad does a stunt during a football game between No. 16 Iowa and Nebraska at Memorial Stadium in Lincoln, Nebraska, on Friday, Nov. 26, 2021. The Hawkeyes defeated the Cornhuskers 28-21.

The University of Iowa’s cheer and dance teams experienced changes to their programs since the beginning of the pandemic, some of which will remain for future seasons.

“We got to have the majority of our 2019-2020 season,” she said. “The only thing that was abnormal there was we didn’t have postseason basketball and we had to do our banquet virtually.”

Eustice said the 2020-2021 season was the most heavily impacted season in terms of COVID-19 because of the uncertainty around sports.

“We actually were able to come back as a team the first week of November, five months after we would have normally started our season,” she said.

The dancers still talk about how difficult it was to come back and get to know each other after that five-month delay, Eustice said.

The cheerleaders had an even longer delay to their season, spirit squad coordinator and head cheer coach Gregg Niemiec said. The cheer team resumed in August 2021.

“It was a 16-month break for the cheerleaders,” he said.

Eustice said the dancers came back before the cheerleaders because of the differences between the sports.

“It just has to do with the nature of our sport,” she said. “Cheerleading, there’s a lot more contact because of the stunting, the basket tosses and things of that nature. Dancing, we were able to social distance and we’re not stunting.”

The cheer team also faced a disconnect between its members making the return to cheering more challenging, said Taylor Tenaglio, one of the captains of the UI cheer team.

“It was hard to really understand who our teammates were,” she said. “Then it was just almost awkward coming in for the first time and being like ‘Yeah, I know what you look like in a little box on my computer screen. But I don’t know who you are as a person.’”

The system was originally an in-person try out on campus, Niemiec said, but it is now all digitally driven.

“Now, it’s videos and back and forth a little bit between the possible incoming students, so that has helped us a lot for cheer and dance,” he said.

Eustice said the new recruitment model is being used in other big schools.

“I think a lot more bigger schools, your Division One FBS schools, Big Ten schools, are going way more towards this recruiting model,” she said.

“We wanted to do something that could move that process a little bit earlier,” she said. “So that if Iowa isn’t the place for a dancer or a cheerleader, then they would have the opportunity to look elsewhere without already being tied into a certain place.”

Niemiec said all the UI spirit squads were able to attend nationals this season except for the cheer team.

“We competed in game day and then pom and jazz,” she said. “[In game day] we got third place, so we brought home the bronze medal, in pom we placed eighth and in jazz we placed at 14th.”