The expanded State Hygienic Laboratory will include a new Bio-Safety Level 3 laboratory before July 2023. 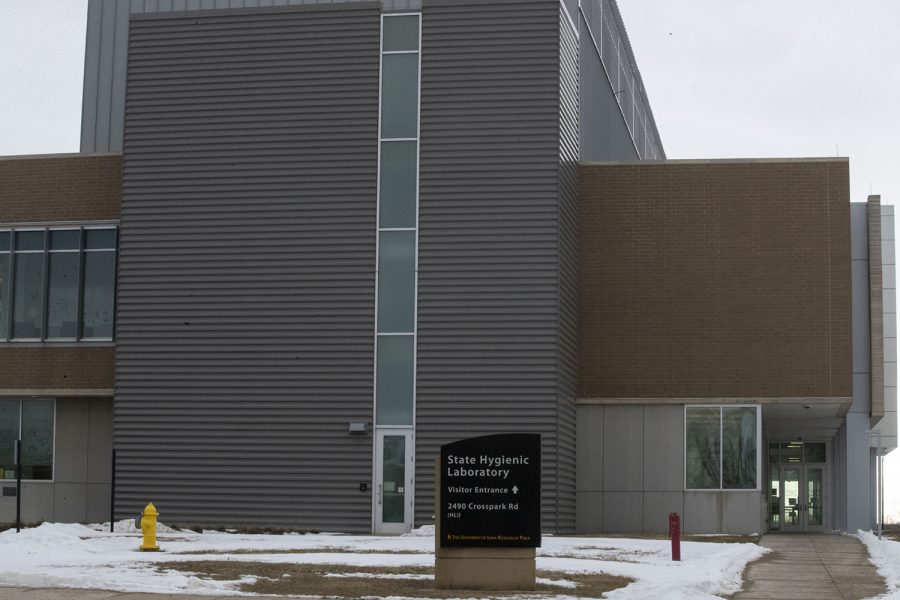 A building mug of the State Hygienic Lab located in Coralville, Iowa, is seen on Thursday, Jan. 27, 2022.

The University of Iowa State Hygienic Laboratory is set to expand before July 2023, after two years of responding to COVID-19.

The state Board of Regents approved the expansion at its Jan. 12 meeting.

Rod Lehnertz, UI senior vice president for finance and operations, said at the meeting that the Centers for Disease Control and Prevention will fund the project through a time-sensitive grant.

“This currently estimated $9.2 million project would be an addition to the east end of the existing State Hygienic Laboratory building,” Lehnertz said. “It would serve public health and enable health and safety testing for the state of Iowa and citizens of the state of Iowa at a very important time.”

Wade Aldous, associate lab director of the diagnostic and clinical division at the State Hygienic Lab, said that while the lab receives funding from the CDC annually, this year was unique.

“They’ve been putting a lot of money into public health these last two years as we’ve been responding to the COVID outbreak,” Aldous said. “What they did was, they said, ‘You can use some of this money to actually help you prepare yourself or your institution so that it can respond to the next big outbreak.’”

The State Hygienic Lab, located at the Iowa Research Park in Coralville, is a public health laboratory that serves all 99 counties of Iowa with various responsibilities, Michael Patella, director of the State Hygienic Laboratory, wrote in an email to The Daily Iowan.

Patella wrote that the laboratory’s responsibilities include COVID-19 testing, which, Aldous added, have been harder to keep up with with as demand for them increases.

Aldous said this addition will give the staff of 130 at the State Hygienic Lab more room to work.

“It’s going to provide some additional space for our sessioning area and where the specimens get dropped off and logged in, because that’s going to be on the main floor,” he said. “Above that is where the new lab spaces will also give us a couple more offices because our workforce has expanded quite a bit to be able to match the demand.”

The expansion includes a new Bio-Safety Level 3 laboratory since there have been ventilation problems with the current BSL-3 laboratory, Aldous said. He said that the new laboratory will allow for a safer study of infectious diseases.

Aldous noted that the expansion will be a 5,000-square foot attachment to the southeast corner of the lab. The amount of money estimated to be spent on the project, he said, has increased from the $9.2 million proposed at the regents meeting.

“We think it’s going to be higher than that now, because when we were making the initial estimates of things, we were planning on leaving some spaces as what we call ‘shell space,’” he said.

Aldous said the CDC wants the expansion furnished, with no shell space.

“The CDC said, ‘no shell space — if we’re going to give you money, you’re going to use the entire space,’” he said.