The preseason All-American, who has been featured on multiple national Twitter accounts, has given the Hawkeyes unprecedented attention. 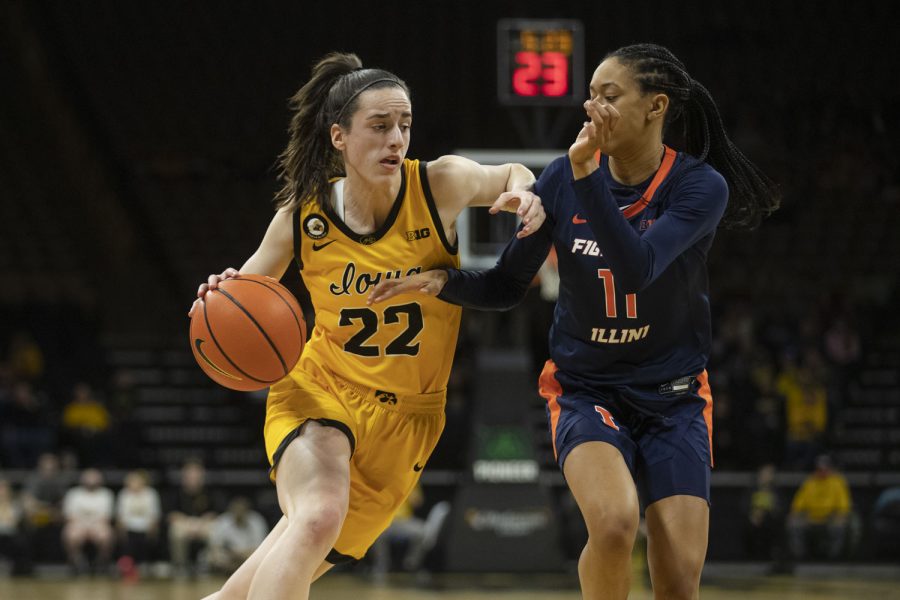 Iowa guard Caitlin Clark drives to the basket during a women’s basketball game between No. 25 Iowa and Illinois at Carver-Hawkeye Arena in Iowa City on Sunday, Jan. 23, 2022. Clark scored 18 points. The Hawkeyes defeated the Fighting Illini, 82-56.

Clark has been featured on the SportsCenter, ESPN Women’s Hoops, and Yahoo Sports Twitter pages throughout the 2021-22 season — putting the Iowa women’s basketball team’s national presence in uncharted waters.

Watch: Caitlin Clark scores a game-high 28 points to help No. 23 Iowa survive an upset scare against Northwestern in overtime.https://t.co/O5dYjHwJyd

“She’s bringing national attention to our team,” head coach Lisa Bluder said. “I’m getting text messages from people like [college basketball analyst] Debbie Antonelli after watching our games, like, ‘Wow, this is so much fun to watch Caitlin.’ Or there was a situation last game where people were sitting next to a family from Columbia, Missouri, to come down here and they’re wearing Iowa shirts, but they wanted to see Caitlin.”

“When Caitlin’s light shines, it shines on all of us,” Bluder said. “Even if we’re in a supporting role, even if we’re holding the camera. It shines on everybody, and that’s good for our program, it’s good for the university, and it’s certainly good for all of us involved.”

She is one of six in the sport to record back-to-back 30-point triple-doubles since 2000.

Although her achievement garnered national attention, Clark knows her feat was the result of a complete team effort.

“I’m held to a really high standard, as is everyone else in this program,” Clark said. “I think getting praise where it’s due but not overdoing it is something Bluder is really good about, no matter who it is. Obviously, a lot of the attention comes to me, and that’s really good for our program, but I always tell my teammates that I wouldn’t be where I am if it wasn’t for them.”

RELATED: No. 23 Iowa women’s basketball takes down Northwestern in overtime

Overall, the Hawkeyes had 37 assists on 43 made shots against Penn State — another program record.

Clark’s main target to grab assists is senior center Monika Czinano. When Clark hurls the ball from the 3-point line to the paint, Czinano drops in a layup.

UPDATE: @CaitlinClark22 is still dishing out assists today… kind of.

After a stat correction, Clark had a B1G record 1️⃣8️⃣ assists against Penn State.

“One of our values is that everyone matters,” Bluder added. “And we try to live by that every single day … It doesn’t matter if you’re the leading scorer or hardly ever get off the bench, or if you’re injured this year, you are an important asset to our team.”

On Monday, No. 23 Iowa will take on its second ranked opponent of the season in No. 22 Ohio State. The Hawkeyes do not yet have a victory over a ranked opponent, as they lost to then-No. 15 Iowa State on Dec. 8.

The Hawkeyes will compete against multiple ranked opponents in the last month of the regular season, including No. 7 Michigan twice and No. 6 Indiana once.

The Hawkeyes and Buckeyes will tip off at 8 p.m. at Carver-Hawkeye Arena. The game will air on Big Ten Network.