No. 2 Iowa men’s wrestling to host No. 1 Penn State at Carver-Hawkeye Arena 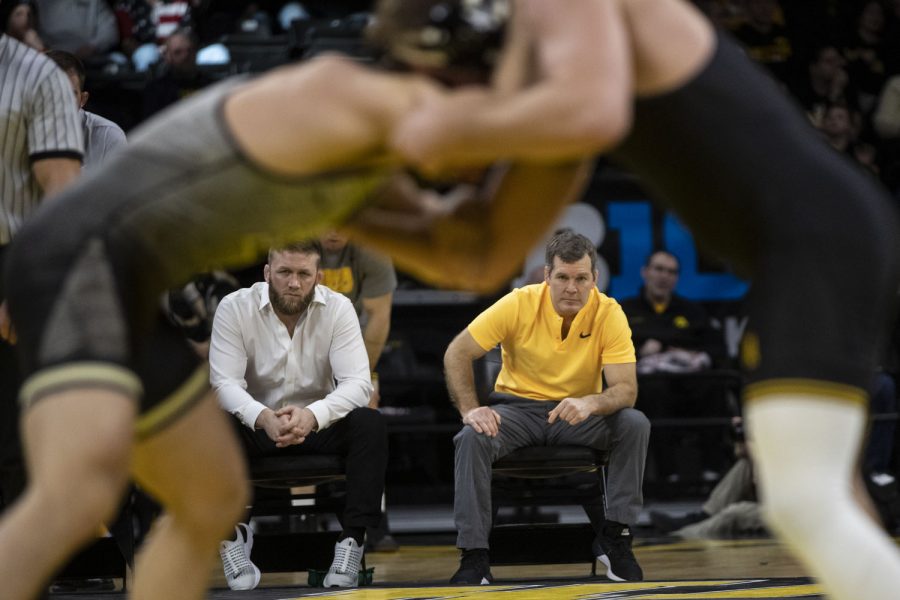 Iowa head coach Tom brands watches his team wrestle during a wrestling meet between No. 1 Iowa and No. 15 Purdue in Carver-Hawkeye Arena on Sunday, Jan. 9, 2022. After the win, Brands improved to 12-0 in his coaching career against Purdue. The Hawkeyes defeated the Boilermakers, 36-4.

“And this is a big match,” Brands added. “You know, is it monumental? I don’t know if you can be that dramatic. But it’s two programs that are after the same things.”

The Nittany Lions have won the NCAA Tournament in eight of the last 11 years. Ohio State won a team title in 2015, and the 2020 NCAA Championships were canceled because of COVID-19.

“There’s a lot of, not saying hatred, not saying bad blood, but there’s a lot of intensity or friction there,” Iowa 197-pounder Jacob Warner said of the Hawkeyes and Nittany Lions. “You know, obviously they want to win, we want to win, and there’s not very many teams that can say that they go out to win the nationals every single year.

“I can honestly say that them and us, we’re two of the teams that go out there legitimately, even if we have no shot in hell, which isn’t the case ever for us, we still expect ourselves to win at the highest level and expect to win a national title,” Warner added.

“When you look at the past 15 years or whatever, it’s pretty much been Penn State and Iowa,” Kemerer said. “And there’s been other teams in there for sure. And you can’t disrespect those other teams, but strong rivalry. Two areas, I’ve gotten the privilege to be from Pennsylvania and then be on Iowa now for seven years. And honestly, it’s two extreme hotbeds of the sport.

“Areas where they love wrestling, super knowledgeable about the sport,” Kemerer added.  “So, you combine all that with the success of the programs, and you know, the coaching staffs and everything, it just makes it an awesome rivalry.”

Despite the dual’s stakes, Brands has kept his team’s mental preparation simple this week.

“The bottom line is, when it’s your time to step on the mat, be ready, be smart, and make things go your way,” Brands said. “It’s a funny thing to say, but that’s really how simple it is. It’s difficult to do. It’s difficult to impose your will on an opponent. But that’s what it comes down to. It’s you or the other guy. That’s what’s great about this sport.”