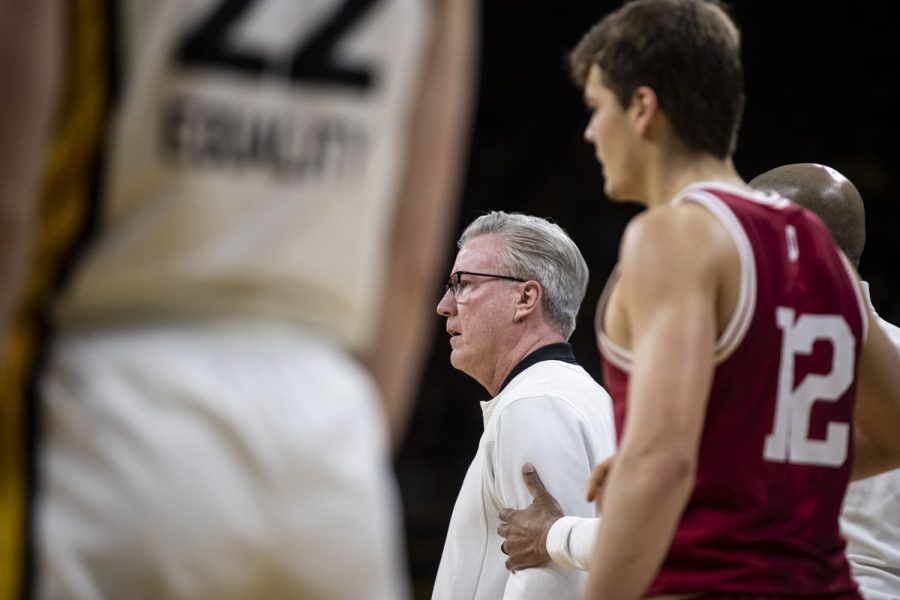 Iowa head coach looks at an official during a men’s basketball game between Iowa and Indiana at Carver-Hawkeye Arena on Thursday, Jan. 13, 2022. The Hawkeyes defeated the Hoosiers, 83-74.

Point/Counterpoint | What is the Iowa men’s basketball team’s ceiling?

Under head coach Fran McCaffery, Iowa men’s basketball has made it to the NCAA Tournament five times. In each of their last four NCAA tourney appearances, the Hawkeyes have been bounced in the Round of 32.

Iowa has drawn difficult second-round opponents like Gonzaga, Villanova, and Tennessee recently. The Hawkeyes have struggled against these teams because they simply lack the defensive prowess to compete with them.

Last season, the Hawkeyes had consensus national player of the year Luka Garza and NBA Draft pick Joe Wieskamp on their roster. Iowa was an NCAA Tournament two seed, and it still couldn’t get past the Round of 32.

Iowa has beaten the Big Ten’s bottom and middling teams like Minnesota, Indiana, and Maryland. But the Hawkeyes have failed to beat any top-tier opponents.

Iowa is 0-3 against AP Top 25 foes this year. In games against ranked competition, the Hawkeyes’ slimmest margin of defeat is seven. The Hawkeyes lost to No. 6 Purdue, 77-70, in West Lafayette, Indiana, on Dec. 3.

Iowa has also suffered 20 and nine-point losses to No. 23 Iowa State and No. 11 Wisconsin, respectively.

If the Hawkeyes are going to make their first Sweet 16 appearance since 1999, they’ll have to find a way to win games against the nation’s best competition.

Odds are, the Hawkeyes will be a middling NCAA Tournament seed, so they’ll probably have to face one of the nation’s 10 best teams in the Round of 32.

This year, the Iowa men’s basketball team is going to make its first NCAA Sweet 16 since 1999.

Why? Because the Hawkeyes have grit.

Grit has been a hallmark of the 2021-22 Iowa men’s basketball team. The Hawkeyes have shown that they know how to take and throw punches this season — even against superior competition.

Versus now-No. 6 Purdue Dec. 3, Iowa shaved a 19-point second-half deficit to two over the course of about seven minutes. Ultimately, the Boilermakers won the game, 77-70, but the Hawkeyes proved they could compete with the country’s best teams. Had a few breaks gone their way, the Hawkeyes might’ve beaten the Boilermakers at Mackey Arena in West Lafayette.

Iowa also has a good enough offense to break its Sweet 16 drought this season. The Hawkeyes rank second in the Big Ten Conference and fifth in the nation in scoring offense. Iowa is putting up about 83 points per game this season.

The Hawkeyes also have one of the country’s best scorers on their roster. Sophomore forward Keegan Murray’s 22.8 points per game average ranks third in the nation.

Iowa still ranks near the bottom of the Big Ten in total defense, clocking in at 11th.  Last week, however, the Hawkeyes surrendered just 99 points across the two games they played — a marked improvement for a team that routinely let up more than 70 points per contest earlier this year.

Iowa has a Sweet 16-caliber offense. Now, the Hawkeyes just need to prove that their defense is ready for a deep NCAA Tournament run.