Eagle populations are headed to Iowa for the winter, in search of food as cold temperatures freeze open water further north. 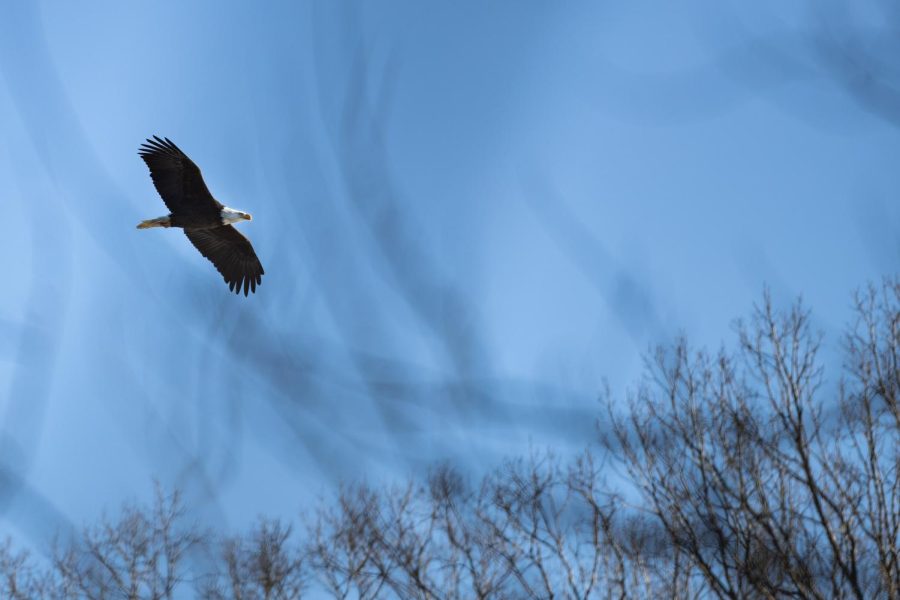 An American eagle glides over the Iowa River on Tuesday, Jan. 25, 2022. Eagles migrate to Iowa in the winter to avoid freezing weather in search of open water to hunt.

Bald eagles are coming to Iowa in increasing numbers in search of open waters and fresh food.

The Iowa Department of Natural Resources reported in a press release that 2022 looks to be “a really good year” for eagles spending the winter in Iowa.

Ryan Anthony, director of the Iowa Raptor Project at the University of Iowa, said more eagles are coming to Iowa in search of food in fresh water.

“The farther north the eagles stay, the less likely there is to be open water for food,” he said.

Wintering eagles, eagles that migrate from colder climates to escape extreme weather that limits their food supply, are coming to Iowa from Minnesota, Wisconsin, and Canada to join Iowa’s existing eagle population, according to the Iowa DNR.

Stephanie Shepherd, Iowa Department of Natural Resources wildlife biologist, said the competition for food sources can increase for bald eagles depending on how harsh the winter is.

“Bald eagles are such strong birds. They can fly long distances to find food if there isn’t enough close by,” Shepherd said.

The Iowa River, which runs through Iowa City, is also home to many bald eagle nests and counts as another destination for wintering eagles.

Richard Hollis, member of the Iowa City Bird Club and a Johnson County resident since 1973, said the increase in Iowa’s eagle population would normally raise concern for some researchers and avid bird watchers.

“They aren’t really thinking about much else other than finding food and staying alive,” Hollis said. “They’re just eating in preparation for winter, they’re here to stay.”

Iowa’s farms can provide another food source for the birds, Hollis said. Dead animals that have not been disposed of on farms can provide a lot of meat for the eagles, he said. Though it’s not fine dining, it plays a key role in bald eagles’ survival through harsh winters.

Anthony said even though wintering eagles set up camp in Iowa, they are not affecting the survival of the other eagles that tend to stay in the area year-round.

“Wintering eagles are not considered outsiders,” he said. “They are Iowan eagles just like the rest of them.”

Eagles are animals that mate for life and establish nest site fidelity, Shepherd said, meaning they will nest in the same territory year after year. Both summer and winter eagles, more often than not, return to their same nesting site that they’ve hosted years before.

Hollis said wintering eagles fit right in with the native bald eagles. The population typically doubles or triples in size, he said, and the resources the birds need to survive are not compromised by the larger population.

The eagles bring beauty to the communities they visit, Hollis said, because the birds work together to find open water and nesting materials. They are predominantly an independent species, he said, but they often show signs of leading others in the right direction of the materials necessary to survive.

“I’ve been bird watching since I was a kid, and I can’t say that I have a particular favorite, but eagles have to be the most fun to watch,” he said.