The Hawkeyes hosted five teams in their final home meet of the 2021-22 season. 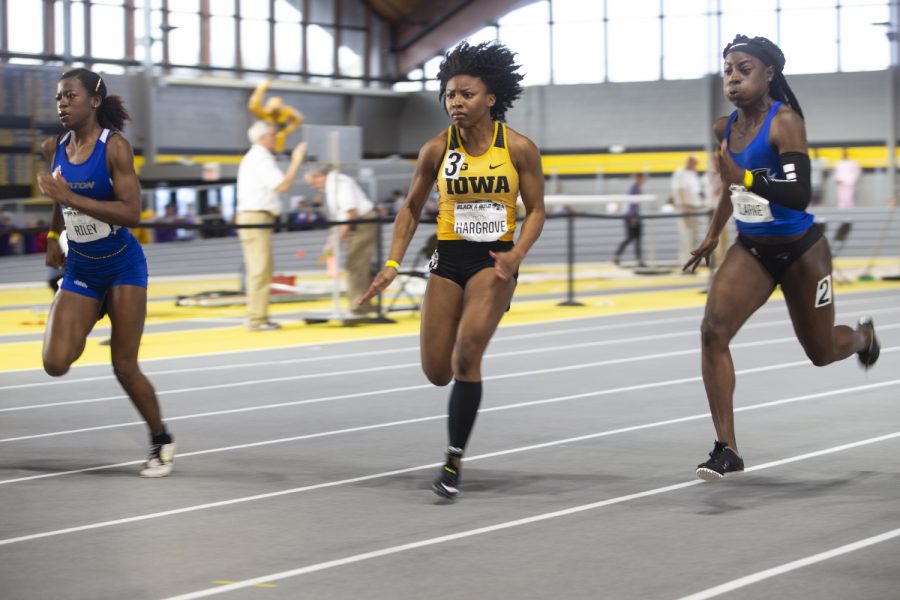 Iowa sprinter Lasarah Hargrove competes in the 60-meter dash premier final during the Black and Gold Invitational at the University of Iowa Recreation Building on Saturday, Feb. 1, 2020. Hargrove finished third in 7.51.

Iowa men’s and women’s track and field swept its competition this weekend at the Larry Wieczorek Invitational.

On Friday, redshirt freshman Jenoah McKiver set a facility record in the men’s 600-meter prelims with a time of 1 minute and 16.8 seconds.

McKiver said his mentality heading into the meet helped him lay down his personal best.

“I came in with my head up,” McKiver said. “I just really wanted the record beforehand.”

The action picked up again on Saturday afternoon as reigning Big Ten Indoor Long Jump Champion James Carter recorded a personal best in the triple jump with a distance of 15.64 meters.

“I thought James, coming off of last night, would probably be a bit fatigued in his legs,” Iowa director of track and field Joey Woody said. “He still hit an indoor PR, so that was good. We’re going to continue to work on some things technically for him.”

The Hawkeyes found success in the 60-meter prelims as sophomore LaSarah Hargrove set a school record in the women’s frame with a time of 7.31 seconds.

“It was really exciting because it feels like all of my hard work is finally starting to pay off,” Hargrove said. “I’m just really excited for the rest of the season… But there’s still a lot of work to do.”

Sophomore Kalen Walker, a transfer from Indian Hills, followed up with a 6.67-second time in the men’s 60-meter prelims.

This weekend’s meet highlighted the ascension of Iowa’s track and field program in the national public eye, Woody said.

“That’s what this meet is all about . . . [It allows] our student-athletes to be showcased and just highlights our program,” Woody said. “I thought our athletes performed at a really high level across the board.”

The Larry Wieczorek Invitational is the last the Hawkeyes will participate in on their home turf. Iowa hosted the Jimmy Grant and Hawkeye Invitational earlier this season.

McKiver, Walker, and Hargrove all smashed school records this weekend as underclassmen.

With the underclassmen’s success, Woody credits his veteran upperclassmen for their mentorship and presence within the program.

“It just shows the direction our program is going,” Woody said. “We’ve got some elite older athletes in our program, and with our youth athletes being able to train in that environment with those guys to get better every day, it takes them all to another level. You can’t replace having great training partners who push you every day.”

The Hawkeyes will be back in action Jan. 27 and 28 at the Razorback Invitational.

The meet will be held in Fayetteville, Arkansas, at the Randal Tyson Indoor Track. Starting times have yet to be announced.