Assad is projected to face No. 7 Kaleb Romero Friday night at the Covelli Center in Ohio. 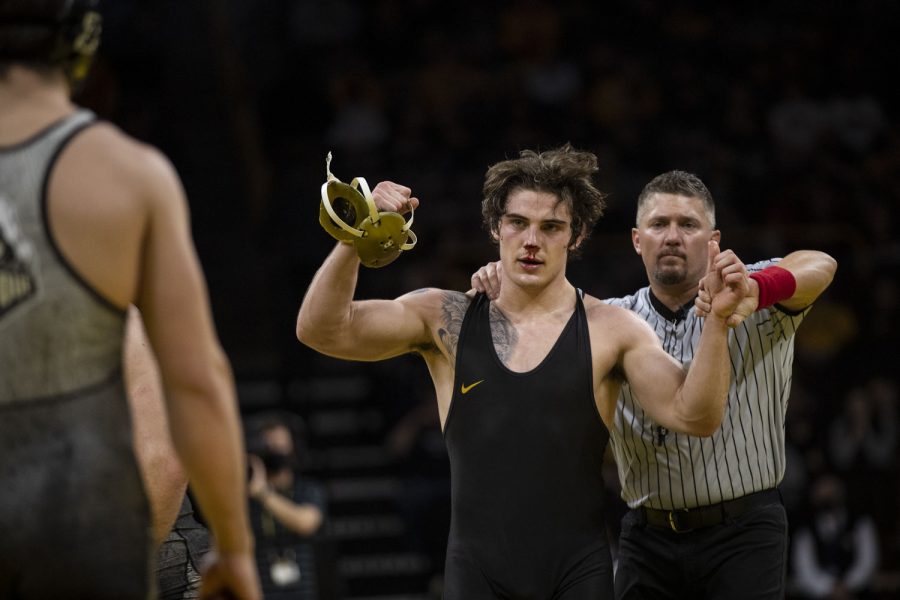 When he met with reporters on Wednesday afternoon, Iowa men’s wrestling head coach Tom Brands described 184-pounder Abe Assad as someone who “wrestles himself into shape.”

Brands will find out what kind of shape Assad is in tonight as Iowa takes on Ohio State at the Covelli Center.

Assad is projected to wrestle Kaleb Romero, who is ranked seventh in the nation at 184 pounds.

“I just got done talking to the Big Ten Network,” Brands said at a virtual press conference Wednesday. “What I said about Assad is that he’s coming on. You know, you have certain guys in your lineup that wrestle themselves into shape. And then you have certain guys that are like fanatics all year, and they’re never really out of shape.

“We’re to that time of year where, you know, these guys that wrestle themselves in the shape, they’re getting better, and it’s noticeable,” Brands added. “So, I think [Assad is] still getting better.”

Assad, who boasts a 9-2 record through his first 11 bouts of the season, has never faced Romero before. Romero bumped up a weight class from 174 to 184 pounds before this season began.

Romero is 6-1 in seven matches this year. He suffered his first loss of the year to Michigan’s Miles Amine Jan. 14. Amine is ranked second in the nation at 184 pounds by Intermat, and he beat Romero, 3-1.

“He’s a good wrestler, for sure,” Assad said of Romero.  “He is a very athletic guy. He played football in high school or whatever. You know, he’s definitely a very athletic kid. I think he wants to slow the match down. I think 99.9 percent of the wrestlers I wrestle are going to want to do that. That’s not who I am.

“You know, I want to keep that pace high all the time — high, high, high, high,” Assad added. “So, I think that’s the biggest thing. He may slow me down, but I can’t let that get in my head. Gotta stay in the zone, stay on my attacks and good things will come from it.  I’m excited.”

None of Romero’s opponents have scored more than three points against him this season.

Tonight’s bout will be Assad’s 12th since he lost to Michigan State’s Cameron Caffery in the 2020 Big Ten Tournament Semifinals.

Assad never had a chance to compete in the 2020 NCAA Championships, as the event was canceled because of COVID-19.

Multiple injuries nagged Assad and kept him from competing in 2021. Brands said Assad worked through his first real spat of adversity last year. Brands added that the All-American is now stronger because he persevered through many challenges a season ago.

In his first three years at Iowa, Assad has formed a strong relationship with Brands.

“I have some really fun conversations with Abe Assad,” Brands said. “He’s always been someone that, you know, I jive with. I think that we could have been pretty good friends if we were contemporaries and we wrestled on the same team together. I think he’s a pretty cool cat.”

Assad said he and Brands share a lot of traits, which makes their connection unique.

“Tom and I, we’ve got very similar personalities, very similar senses of humor,” Assad said. “[If we were teammates], I’d probably make short jokes all the time to him — stuff like that. Don’t tell him I said that.”

Brands and Assad’s bond bleeds over onto the mat too. Assad said that, when he’s wrestling, Brands’ emotion on the sideline helps him compete at a high level. Assad went as far as to say Brands’ excitable demeanor during matches was a big factor in his college decision.

“I mean, it’s the reason I came to Iowa,” Assad said.  “You know, one of the biggest reasons I came to Iowa is . . . I want my coach fighting for me. If I look over and my coach is going crazy in the corner, that’s gonna get me fired up. If my coach is just sitting there, legs crossed, arms crossed, just watching me, you know, I don’t want that.”

Action between Iowa and Ohio State will begin at 7 p.m. Friday and air live on the Big Ten Network.