Iowa Republicans and the GOP’s war against the media must end. 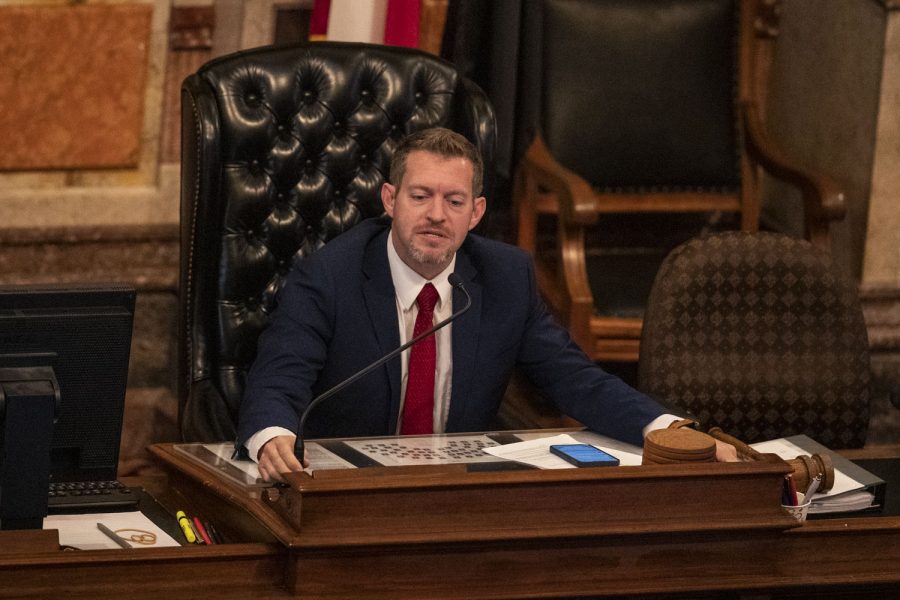 Iowa Senate President Jake Chapman speaks during the second day of the 2022 Legislative Session at the Iowa State Capitol in Des Moines, Iowa, on Tuesday, Jan. 11, 2022.

You don’t have to be a journalist to know that Iowa Republicans evicting the media from the Iowa Senate floor is a big deal. In fact, it already made national news last week in The Washington Post.

Reporters are rightly causing a stir over this decision, but the consequences are a threat not only to journalism, but to American democracy.

This year, Republican leaders in the Iowa Senate barred journalists from working at press benches in the chamber. The tradition, which lasted over a century, allowed reporters to have a clear view of legislative debate and ask senators questions or clarify their statements.

Reporters, photographers, and multimedia journalists have now been exiled to the public gallery in the upper level, preventing them access to the Senate floor.

Iowa Republicans’ decision to end this long-standing practice harms not only the fourth estate, but also the value of transparency in our democratic system.

One of the primary responsibilities of a journalist is to serve as a watchdog, meaning to hold political figures and the government accountable, when necessary. We take pride in our principles, including that of public accountability.

But it’s not just about letting us do our job. When journalists face barriers to their ability to accurately report, Americans — who rely on us for information— suffer.

As journalists, we work as the eyes and ears for the public. So, when access is restricted and information is unattainable, we’re left with no choice but to provide little information to Americans about issues that may affect them.

However, what’s more alarming is that Iowa is contributing to an ongoing trend of elucidating the press as an enemy of American democracy.

Former President Donald Trump is among the most notable Republican figures who have spearheaded the war against the media. During his presidency, Trump attacked the credibility of the press, referring to it as “fake news,” “the enemy of the people,” and calling its members “low life reporters” on multiple occasions.

While other Republicans may not use as demeaning of rhetoric as Trump, there is no question that it has influenced the party’s emerging stance against the media. During the opening of the Iowa Legislative session, Iowa Senate President Jake Chapman went as far as accusing the press of promoting a “sinister agenda.”

But the truth is the work that we do as journalists is vital to American democracy. Freedom of the press was enshrined in the foundation of our country when it was guaranteed under the First Amendment of the U.S. Constitution. America’s early presidents believed in its importance, with James Madison saying “the freedom of the press, as one of the great bulwarks of liberty, shall be inviolable.”

As journalists, we are responsible for writing “the first draft of history.” From reporting on the Jan. 6 insurrection to the conditions of health care facilities during the pandemic, providing information to the public is invaluable for future generations.

However, the role and reputation of journalism is on a dangerous path, and Iowa has set a precedent for the rest of the country to follow. We are already seeing the repercussions of Iowa’s decision, as Kansas has taken similar actions and recently banned journalists from the state Senate floor.

There is no question that the GOP’s war on the press must end. Americans deserve to know how the government will affect their lives, and the right to access and provide that information.

We are not the enemy — in fact, we are essential. If journalists continue to be attacked and our work is constantly undermined, we won’t be able to contribute our part in ensuring democracy and providing information to the public.

And more importantly, it means that many Americans are going to be left in the dark about important issues that affect them.