The Hawkeyes and Hoosiers will not play at Carver-Hawkeye Arena on Sunday because of COVID-19 issues within the Indiana program. 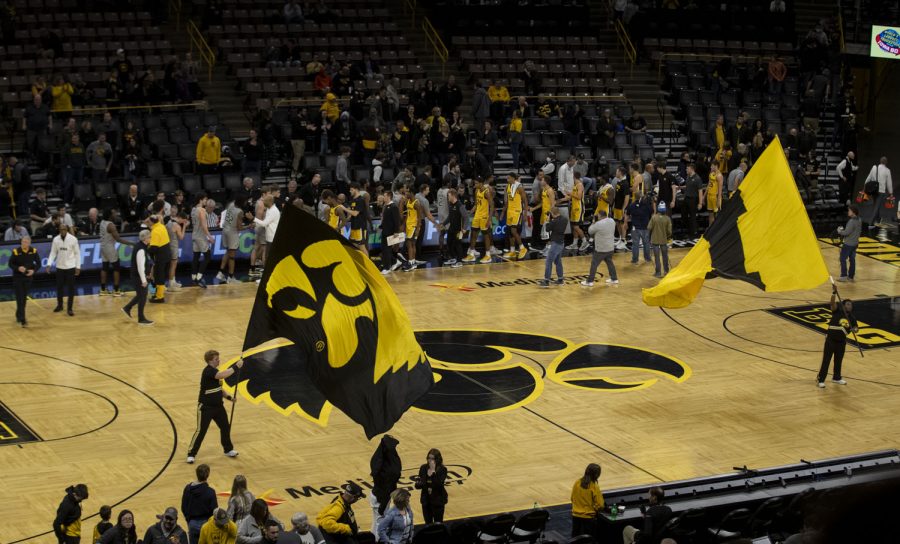 The Iowa spirit squad waves flags at the end of the game while both teams shake hands during a men’s basketball game between Iowa and Western Michigan at Carver-Hawkeye Arena in Iowa City on Monday Nov. 22, 2021. The Hawkeyes defeated the Broncos 109-61.

The Iowa-Indiana women’s basketball scheduled to be played Sunday at Carver-Hawkeye Arena has been postponed because of COVID-19 issues within the Hoosier program, Hawkeye Athletics announced Tuesday.

The Hawkeyes and Hoosiers will work with the Big Ten Conference to reschedule the game. If the game cannot be rescheduled, it will be considered a “no-contest.”

The Iowa-Penn State contest has been rescheduled for Jan. 25 in State College, Pennsylvania, and the Iowa-Illinois game will now be on Feb. 12 at Carver-Hawkeye Arena.

Iowa Athletics recommends that fans hold onto their tickets for the Iowa-Indiana contest, as the stubs will be honored for the rescheduled date or a rescheduled opponent this Sunday.

Iowa travels to Minneapolis this Thursday to take on Minnesota. The Hawkeyes and Golden Gophers will tip off at 7 p.m. at Williams Arena.