With Spencer Lee out for the season, the true freshman vaulted into Iowa’s starting lineup on Jan. 7. 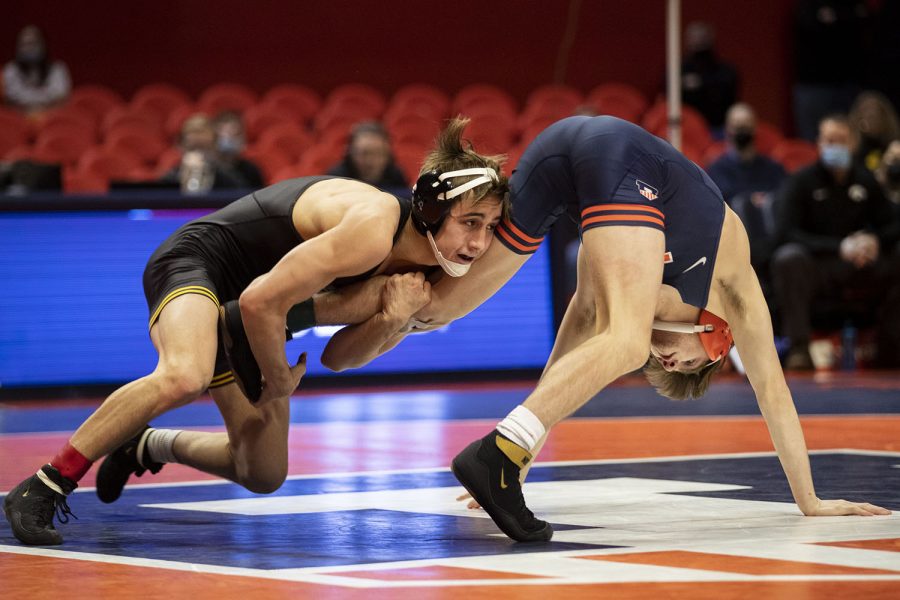 Iowa’s 125-pound No. 12 Drake Ayala wrestles Illinois’ No. 26 Justin Cardani during a wrestling dual between No. 2 Iowa and No. 21 Illinois at State Farm Center in Champaign, IL on Sunday, Jan. 16, 2022. Ayala defeated Cardani, 7-4, by decision. This is Ayala’s sixth win against ranked opponents. The Hawkeyes defeated the Fighting Illini 36-3.

When Iowa men’s wrestler Max Murin stood up to leave the Hawkeyes’ Jan. 12 Zoom meeting with reporters, he offered up some commentary on his teammate, Drake Ayala.

“That’s Drizzy Drake,” Murin said. “We call him Drizzy Drake. He might be the coolest dude on the team. Still up for debate.”

Ayala is a 125-pound true freshman from Fort Dodge, Iowa. He’s only wrestled four matches as a Hawkeye.

Ayala was originally going to redshirt in 2021-22. But when senior Spencer Lee opted to have season-ending surgery on torn ACLs in both his left and right knees, Ayala was vaulted into action.

“In this case, with Drake Ayala, it’s not a gamble,” Brands said of pulling “Drizzy Drake’s” redshirt. “We know his approach. We know his attitude. We had dialogue with him throughout the year.

“There’s just a lot of similarities between where he came from, being raised and brought up in the sport and his coaches, and our program,” Brands added. “And that’s why we recruited him so hard as a priority. You know, he wasn’t a second-tier guy where we missed someone and had to go after him. He’s someone that was top-tier for us.”

Ayala has wrestled 16 total matches since he arrived at the University of Iowa. He competed in 12 bouts detached from the Hawkeyes.

Ayala is 13-3 overall this season. Four of his wins have come against wrestlers ranked in the top 20 nationally.

Ayala chalks up a lot of his success this year to his simple mindset: Stay ready.

“It’s big here that we always need to stay ready,” Ayala said. “No matter if we’re a freshman, sophomore, senior, not in the lineup, whatever. We always have to stay ready. So, I mean, that’s what I did. I stayed ready and now my time is here.”

Brands has already seen Ayala’s mindset in action this season. The three losses Ayala has suffered this year have all come to Minnesota’s Patrick McKee, who is an All-American. Ayala has never lost to McKee by more than four points.

“He’s not someone where you have to maybe sugarcoat when we go, ‘If we’re going to go, let’s go,’” Brands said. “And those are his words and my words and his family’s words. And that is a really good partnership with the philosophy of the program . . . We embrace him. He embraces us without even talking about it. I mean, there’s just so much upside to having a relationship like that.”

“Drake Ayala is so good at wrestling,” Murin said. “I mean, that a single [leg takedown] he hits so fast. I mean, he’s going to be one of the top guys in the country as a true freshman. His maturity as a 19-year-old freshman is just, I mean, you don’t really see that a lot. He’s able to scrap with anyone.”