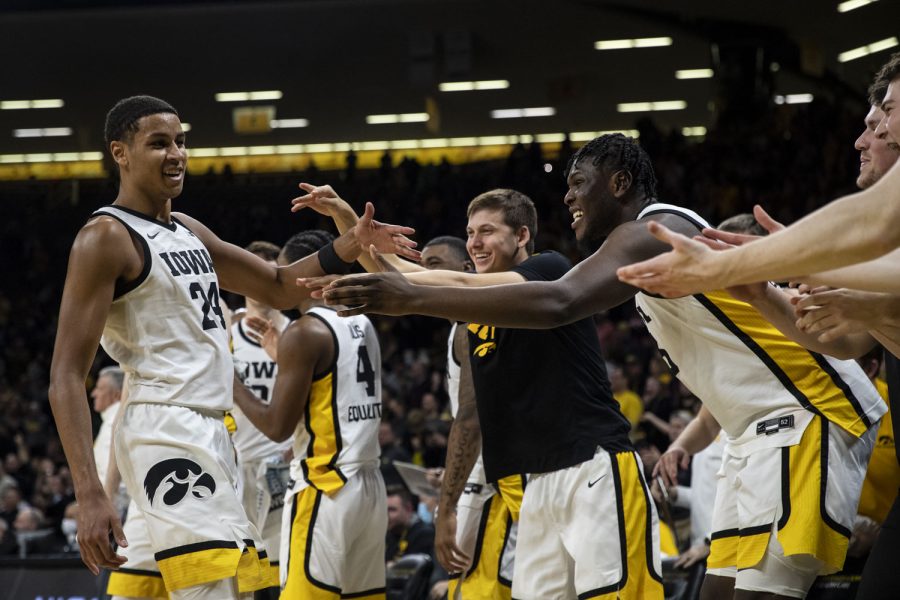 The Iowa bench cheers on forward Kris Murray during a men’s basketball game between Iowa and Indiana at Carver-Hawkeye Arena on Thursday, Jan. 13, 2022. The Hawkeyes defeated the Hoosiers, 83-74. Murray led the team in points with a new career-high of 29.

Iowa forward Kris Murray led the team in points with a new career-high of 29. Murray scored 17 points in the first half, matching his previous career-high. After the game, Iowa swarmed Murray to celebrate. “I don’t really know how many points I had but I guess it was a pretty good game,” Murray said. “It was really cool, just everyone coming up to me.”

The Hoosiers turned the ball over a total of 23 times giving up 34 points to Iowa. In a press conference following the game, Iowa head coach Fran McCaffery spoke about the advantage of these turnovers for Iowa. “We were active in a press, we were active in the zone, we played a little bit of man,” McCaffery said. “Our double teams were clearly much better in the first half.”

Coming into the game, Iowa guard Jordan Bohannon was one 3-pointer away from 400 and four shots away from 1,000 attempts. Bohannon reached both of these goals after shooting 1-7 in 3-pointers.