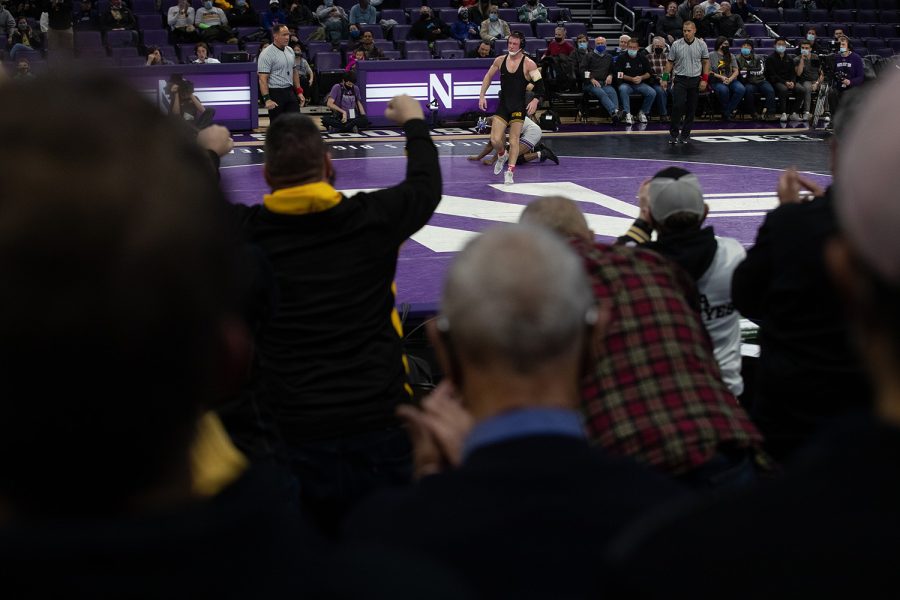 Iowa was down, 6-3, after dropping two of three matches to start its dual against Northwestern at Welsh-Ryan Arena on Friday night.

The senior was down, 3-1, entering the third period against Yahya Thomas. Murin, the No. 12 wrestler in the nation at 149 pounds, was the underdog against fifth-ranked Thomas.

Murin exploded with three points —an escape and a takedown — in the final frame to upset Thomas and propel the No. 2 Hawkeyes to a 33-6 victory over the No. 23 Wildcats.

Head coach Tom Brands said Murin’s command in the third period is what he wants to see out of all of his wrestlers in all three periods.

“My point is you can wrestle for five, six, seven minutes like he wrestled the last 45 seconds,” Brands said. “That’s my point. And when we have guys that do that, our chances go way up, not to win, but to dominate.”

No. 12 Kaleb Young picked up another comeback victory at 157 pounds. No. 1 Alex Marinelli walked onto the mat and won via forfeit at 165 pounds, and second-ranked 174-pounder Michael Kemerer pinned Northwestern’s Jack Jessen with 23 seconds remaining in the first period.

Then, No. 6 Tony Cassioppi came out at heavyweight for a 7-3 decision win against No. 17 Lucas Davison for another Hawkeye comeback victory.

“Cassioppi was in a hole, got a bad call against him, meaning it was probably the right call,” Brands said. “They looked at it, and all of a sudden, you’re down by two and came back, and that really wasn’t close. We’re in on the leg, we put the guy down. So, we won eight matches and it’s kind of ho-hum. So, a lot of positive there.”

The Hawkeyes are now 9-0 on the 2021-22 campaign, with a 3-0 record in the Big Ten. Friday marked Iowa’s 26th consecutive conference victory.

Iowa hasn’t wavered after it lost three-time national champion Spencer Lee for the remainder of the season and fell to No. 2 in the latest National Wrestling Coaches Association Poll behind Big Ten rival Penn State.

Senior 133-pounder Austin DeSanto and 141-pounder Jaydin Eierman, who are ranked third and second at their respective weights, sat out the Hawkeyes’ dual against the Wildcats on Friday.

Instead, Cullan Schriever and Drew Bennett made their season debuts for the Hawkeyes.

At 133 pounds, Schriever stepped up to face No. 9 Chris Cannon.

Cannon pulled out a 4-3 victory with an escape in the third period. Prior to the match, Schriever was 15-3 in open competition this season.

Bennett fell to No. 32 Frankie Tal Shahar, 10-6, at 141 pounds. Though the match was tied at six through two periods, Tal Shahar jumped out to an escape and a takedown and finished the match with riding time.

Following the dual, Brands said that Schriever will wrestle in place of DeSanto again on Sunday against Illinois. Eierman was resting against Northwestern, Brands said, but did not specify if Bennett will take the mat again on Sunday.

Iowa will head to Champaign to face No. 21 Illinois at 3 p.m. on Sunday. The dual will be televised on Big Ten Network.