The consensus All-American is a projected first-round pick. 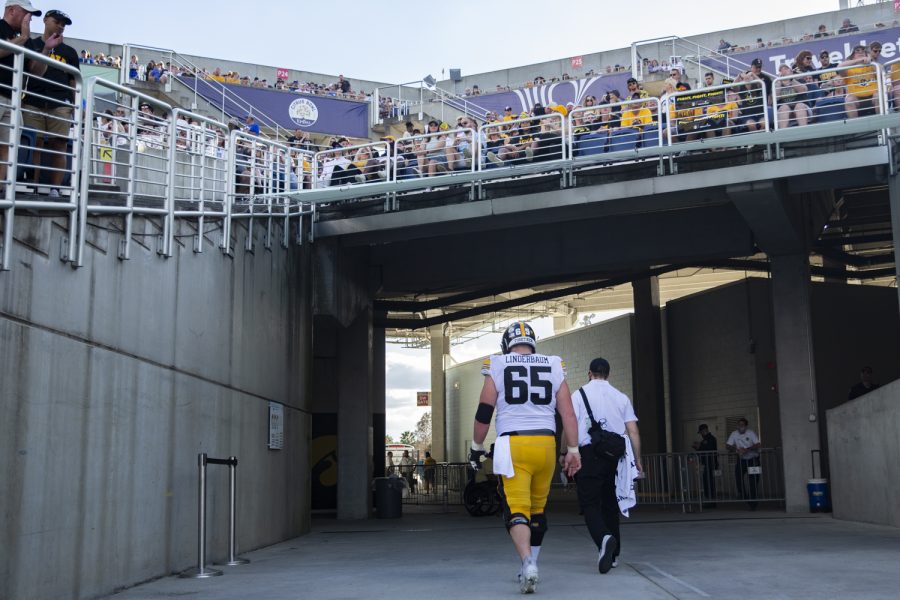 Iowa center Tyler Linderbaum heads to the locker room after an injury during the 2022 Vrbo Citrus Bowl between No. 15 Iowa and No. 22 Kentucky at Camping World Stadium in Orlando, Fla., on Saturday, Jan. 1, 2022. The Wildcats defeated the Hawkeyes, 20-17.

Iowa football’s junior center Tyler Linderbaum has declared for the 2022 NFL Draft. After four seasons with the Hawkeyes, the 6-foot-3, 290-pounder announced that he is leaving the program Friday morning.

Linderbaum is now the fifth Hawkeye to declare for the 2022 NFL Draft.

Running back Tyler Goodson opted out of the 2022 Citrus Bowl, making his intention to turn professional public on Dec. 10. Defensive back Dane Belton declared for the NFL Draft on Jan. 8. Belton finished the regular season with a Big Ten Conference-leading five interceptions.

Seniors Jack Koerner and Kyler Schott, who play safety and guard, respectively, have also declared for the 2022 NFL Draft.

Pro Football Network currently projects that Belton will be a fifth-round pick in this year’s NFL Draft.

Linderbaum has been a projected first-round NFL Draft pick for the better part of two years. Some experts even think he could be drafted in the top 10.

If Linderbaum is drafted in the top 10, a big pay day could await him. Penei Sewell, an offensive lineman selected in the top 10 of last year’s NFL Draft, signed a four-year, $24 million rookie contract with the Detroit Lions.

Sewell’s contract was fully guaranteed, and he received a $14.88 million signing bonus from the Lions.

Linderbaum also won the 2021 Rimington Trophy, which is awarded annually to the best center in college football.