This weekend, the Heartlanders will play one game against the Kansas City Mavericks at home and two others on the road versus the Indy Fuel. 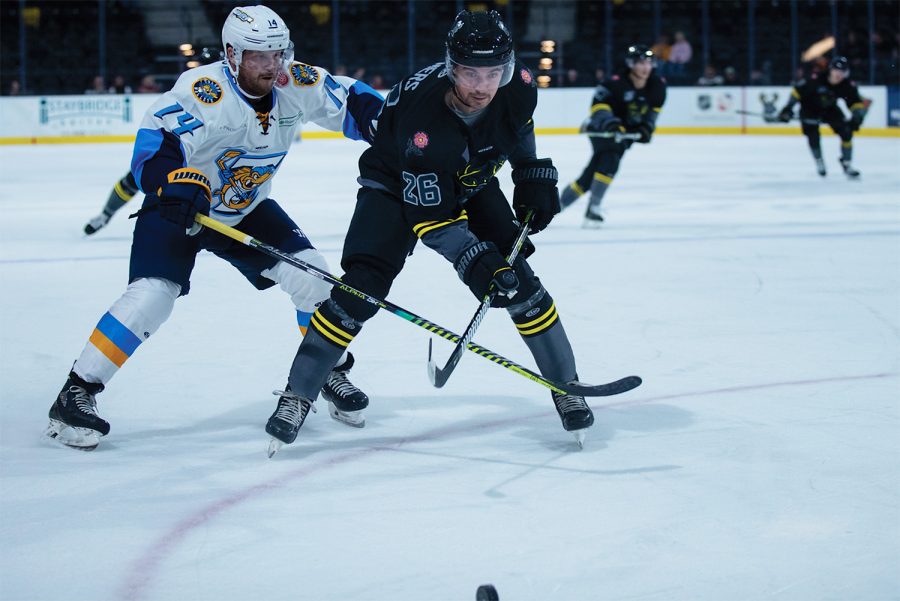 Iowa forward Zach Remers and Toledo forward John Albert chase after the puck during a hockey match between the Iowa Heartlanders and the Toledo Walleyes at the Xtreme Arena in Coralville, IA on Saturday, Oct. 30, 2021. The Walleyes defeated the Heartlanders 5-2.

Iowa played a three-game series against the Rapid City Rush from Jan. 7-9, picking up two victories.

White and Remers served as defensemen for the entire series— a tough position change for two offensive-minded forwards.

“It felt a little different getting used to playing a different position like that,” Remers said. “But you got to do what you can to help the team, and we had short numbers. So, I’m happy to step in there and help them get a nice big two points for the boys.”

Remers and White had to fill in on defense for the Heartlanders because Iowa’s roster was depleted on account of COVID-19 and call-ups to the American Hockey League’s Iowa Wild.

With the availability of some rostered Heartlanders still in question, White and Remers may have to contribute on the defensive end of the ice again soon.

“It was nice to have somebody else back there who wasn’t really been back there before either,” White said. “So, it was fun. It was a good experience. We ended up winning, so I guess I’ll have to play more D.”

Regardless of what their lineup looks like, the Heartlanders are going stick to the plan that has won them games throughout the season.

“You start to see it with the structure of the team,” Heartlanders assistant coach Derek Damon said. “Everybody plays within the structure, and when we do that, we work hard, we can be successful when we play fast.”

Since Dec. 31, the Heartlanders have played five consecutive road games. Iowa will play its first home game in almost two weeks on Friday. Iowa will welcome the Kansas City Mavericks to Xtream Arena in Coralville at 7 p.m.

“It’s a lot of travel, that’s for sure,” Damon said of the Heartlanders’ schedule. “But it also gives guys a chance to really get close with one another on the road. There’s no distractions we have at home. You’re not getting pulled in different directions. You can really just be with the guys and be with the team. You get close, guys bond when you’re on the road so much, so we can use it as an advantage.”

The 15-16-1 Mavericks are the most penalized team in the ECHL. Kansas City has racked up 686 penalty minutes this season. The Mavericks are currently in fifth place in the ECHL Mountain Division.

Following their Jan. 14 home game, the Heartlanders will travel to Indianapolis to take on the Indy Fuel. Iowa will play back-to-back games against the Fuel.