Charlie Jones to return to Iowa football for 2022 season

The senior wide receiver and kick returner caught three touchdowns for the Hawkeyes in 2021. 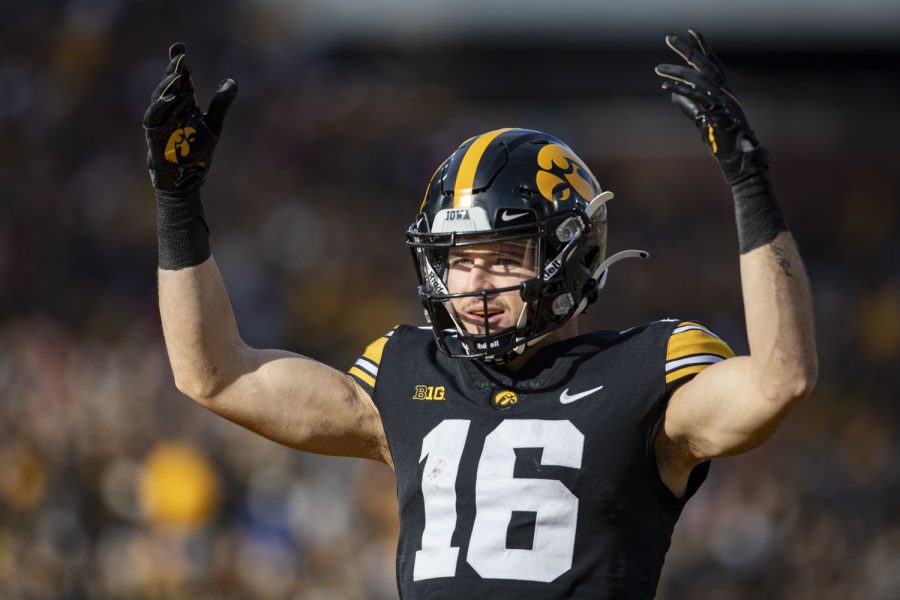 Iowa wide receiver Charlie Jones pumps up the crowd during a football game between No. 17 Iowa and Illinois at Kinnick Stadium on Saturday, Nov. 20, 2021. Jones had one touchdown on the day. The Hawkeyes defeated the Fighting Illini 33-23 at the last Iowa home game of the season.

Iowa wide receiver Charlie Jones will return to Hawkeye football in 2022 for his sixth season of college football, he announced Thursday afternoon.

“The 2021 season was both incredibly memorable and rewarding,” Jones said in a statement posted to Twitter. “I would like to thank my family, friends, teammates, coaches, and Hawkeye nation for all their support throughout the year. Playing college football has always been a dream of mine and being able to live out that dream at Iowa has been a blessing for me and my family.

“I’m excited to announce that I will be returning to Iowa for the 2022 season. I have unfinished business to accomplish and look forward to achieving my goals with this team. See you in Kinnick.”

Jones started his Iowa football career in the 2020 season after transferring from University of Buffalo — a Mid-American Conference institution. Jones sat out the 2019 season because of NCAA transfer rules.

Jones was mainly a kick and punt returner for the Hawkeyes in his first season. He garnered second-team All-Big Ten and third-team All-America return specialist honors in 2020.

He saw more action at wide receiver in his second season with the Hawkeyes in 2021. Jones brought in three touchdowns and picked up 323 yards on 21 receptions — an average of 15.4 yards.

Jones is also the 2021 Big Ten Return Specialist of the Year with 635 kick return yards over the course of 14 games.