The Johnson County Board of Supervisors voted against part of the Sheriff’s Office’s fiscal 2023 budget to buy the Lenco BearCat G2 armored vehicle and the purchase of a new patrol vehicle on Wednesday. 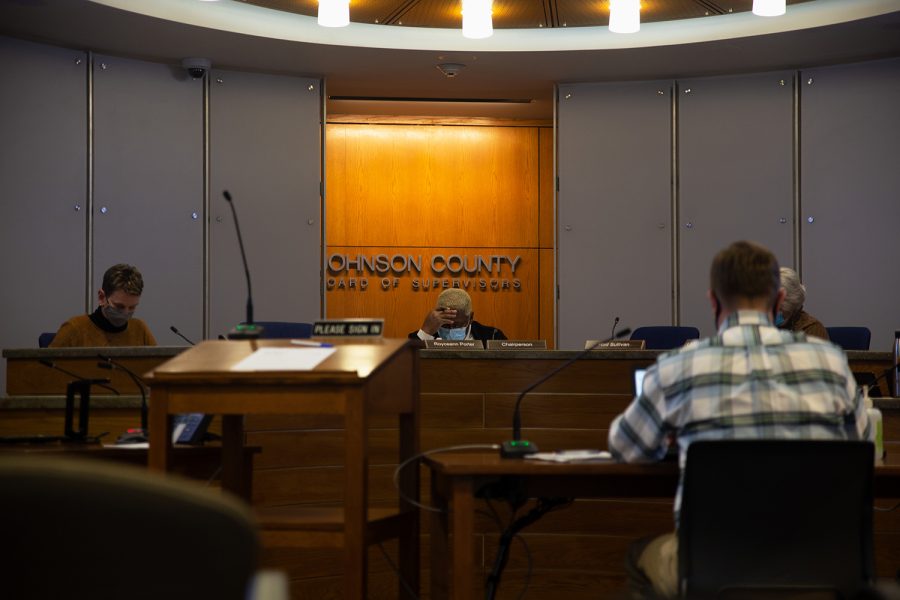 The Johnson County Board of Supervisors Budget Meeting took place at the Johnson County Administration Building on Jan. 12 2022. In the meeting, the board of supervisors discussed the police budget as the Iowa City Police Department want funding for a new military SWAT vehicle.

After calls from the community against the purchase of the Lenco BearCat G2, the Johnson County Board of Supervisors unanimously voted against the armored vehicle on Wednesday, keeping a larger military vehicle in the Sheriff’s possession.

The BearCat was slated to replace the Mine-Resistant Ambush Protected Vehicle, which are both armored vehicles built to withstand bullet fire. The MRAP is a military vehicle, while the BearCat is a smaller, standard rescue vehicle in U.S. SWAT operations.

The MRAP vehicle, that the Sheriff’s Office still has access to, was given to the county in 2014 as part of the federal government’s 1033 program, which gives military equipment to law enforcement.

Johnson County Sheriff Brad Kunkel had made clear he would keep the MRAP if the supervisors didn’t approve the purchase of the BearCat.

The supervisors also approved the Sheriff’s budget including:

The board also voted down the purchase of a new patrol vehicle at $42,000 for the new patrol deputy.

the board of supervisors will be discussing the proposed sheriff’s budget next week. show out to the meeting and email the supes. hit us up for talking points or help contacting supervisors. and sign the following petitions: pic.twitter.com/EWpiHH3K3L

Most public commenters on Wednesday were opposed to both keeping the MRAP and the purchase of the BearCat, but the Board of Supervisors has said it doesn’t have authority to direct the sheriff’s office to get rid of the MRAP.

Amel Ali, Vice Chair of the Ad Hoc Truth and Reconciliation Commission and Iowa Freedom Riders representative, told the supervisors the community does not need the BearCat.

“I think that having to spend that much money when we already have access to a free armored vehicle seems asinine,” she said.

Martha Hampel, the organizer of scrapthemrap.org, told the Supervisors that a petition to the Johnson County Sheriff, Board of Supervisors, and the Emergency Management Commission, to stop the use of the MRAP and not acquire replacements for it has over 600 signatures from community members and organizations.

“On behalf of the 632 signees, I respectfully ask this board to vote no on the sheriff’s budget that includes $240,000 For Lenco BearCat,” Hampel said.