Reynolds proposed a 2.5 percent increase across all public education, including higher education. The increase comes up short of the Board of Regents request for the year. 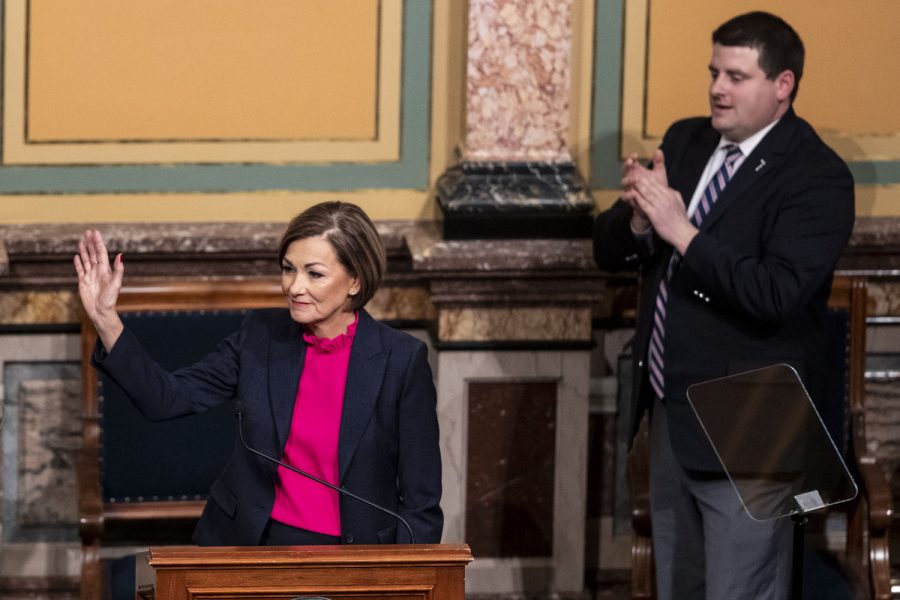 Iowa Governor Kim Reynolds waves to attendees and legislative members during the conclusion of the Condition of the State address at the Iowa State Capitol in Des Moines, Iowa, on Tuesday, Jan. 11, 2022. During the State address, Reynolds spoke about childcare, Iowa teachers, material taught in schools, unemployment, tax cuts, and more. Reynolds closed her speech with a quote from “Field of Dreams.” “James Earl Jones’ character tells Ray Kinsella, in a baritone voice I can’t imitate: ‘People will come Ray. They’ll come to Iowa for reasons they can’t even fathom.’”

Iowa’s three public universities would receive a 2.5 percent increase in state money under Iowa Gov. Kim Reynolds’ budget proposal, though the increase comes short of what the state Board of Regents requested.

In their fiscal 2023 request for money from the state, the Regents requested a $22 million increase from fiscal 2022 in total for the three universities. Reynolds’ budget proposal provides around $14.8 million more than last year.

Ultimately, the Legislature did not provide any spending increase to the Regent’s universities, in 2021, freezing funding.

In her Condition of the State address Tuesday night, Reynolds said education accounts for over 50 percent of all state spending.

“The importance of a strong public school system is reflected in the State budget,” she said.

In a press conference after Reynolds’ address, Senate Majority Leader Jack Whitver told reporters that Republicans will need to caucus and discuss how much funding education should receive.

“So I don’t know what number that will be as far as the investment in education, but like every year, it’s going to be probably over half of the new money we spend is going to go in education,” Whitver said.

In an interview with The Daily Iowan in December, UI President Barbara Wilson said when she meets with legislators, she tries to remind them of the resources the university provides to the entire state.

“I think that’s the main thing — support higher ed in the state, help us attract talent, keep people in the state, encourage more people to come here, both at the undergrad and the graduate and professional level,” Wilson said. “We are a magnet for talent, and what we are trying to help our legislators appreciate is the impact that this place has on the state, not just on Iowa City, or Coralville, or in North Liberty.”

“One of the best ways that we can do that is by getting kids educated right here in  Iowa,” Wahls said. “Underfunding our Regents universities is one of the favorite pastimes of Iowa Republicans. So not a surprise to me. And obviously, it’s not going to solve the Reynolds workforce crisis.”

House Minority Leader Jennifer Konfrst said that the state’s universities have been under attack by the legislature.

“The burden of paying for these Regents’ institutions is falling on students,” she said. “That used to be that 30 percent of the cost of a student going to a Regents institution came from the student and 70 percent came from the state — that number is now flipped.

State appropriations for the Regents’ universities have stayed the same or decreased over the past several years, leading to rising tuition costs.

Lauren White and Natalie Dunlap contributed to this report.