During the opening of the 2022 Iowa legislative session, Rep. John Wills, R-Spirit Lake, introduced a bill Tuesday morning that would cause presidential executive orders to be put under review to evaluate for constitutionality. 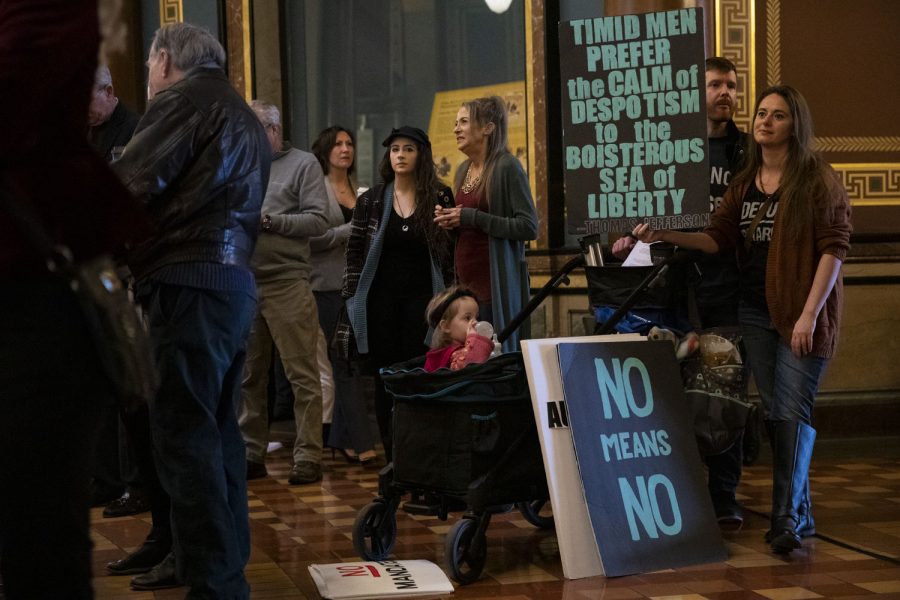 Attendee Jennifer Leonhard holds up a sign during a rally before the opening of the 2022 Legislative Session at the Iowa State Capitol in Des Moines, Iowa, on Monday, Jan. 10, 2022. Leonhard attended the rally to support the medical freedom and privacy bill.

On the second day of the 2022 Iowa legislative session, a lawmaker introduced a bill that would put presidential executive orders under review in Iowa if those orders are suspected of restricting a person’s rights.

The bill, introduced by Rep. John Wills, R-Spirit Late, applies to executive orders surrounding a pandemic or health emergency, the right to bear arms, and other personal rights.

Wills said the legislation is intended to evaluate executive orders based on their constitutionality and while a vaccine mandate was not what he had in mind while writing the bill, he said, many of his constituents have been opposed to the federal executive order.

“This was kind of an effort for the state of Iowa to take back its rightful place to control what happens here,” Wills said.

Wills said that the states that are situated along the Keystone Pipeline have signed similar bills to prohibit similar executive orders from happening in the future.

After its introduction, the bill was referred to the State Government committee.

Rep. Bobby Kaufmann, R-Wilton, who chairs the committee said that people in his caucus remain concerned about both Republican and Democratic presidential executive orders, as the previous and current presidents have each made what he sees as too many, he said.

Kaufmann is already in support of the bill, he said, because it will put Iowa on a list of states that push back against a perceived excess of executive orders.

On Sept. 9, 2021, President Joe Biden issued an executive order requiring federal contractors and jobs with over 100 employees to receive the COVID-19 vaccine. Iowa Republicans and Democrats have been split on the issue ever since.

People demonstrated against vaccine mandates at the Iowa State Capitol building during the opening of the session on Jan. 10.

Gov. Kim Reynolds signed a bill on Oct. 29, during a special session of the Iowa Legislature, that allows medical and religious vaccine exemptions in Iowa, but some anti-vaccine protesters said the law doesn’t go far enough in pushing back against the federal mandate.

Curt Clayberg, a protester from Cedar Rapids, said that the federal government is encroaching on states’ rights. He said he wants a bill that would prevent that from happening.

“The federal government’s eventually going to try to come in here and force the issue,” Clayberg said. “And that’s why we want a bill that says ‘no, we’re not going to comply with this,’ you know, within the state of Iowa at least.”

Another protester, Tony Camero from West Des Moines, said that the exemption bill is a “trap door” when it comes to protecting their rights. He said the fact that someone can get fired without a medical or religious exemption, means that their rights are not actually safe.

Camero was supportive of a bill that would prohibit vaccine mandates altogether and believes that there are people in the state government who have similar goals, but may be under pressure to not follow them.

“I think [the state Legislature] can do things to affirm our God-given rights and restate that the government is there to protect our rights, not to abuse them,” Camero said.

Iowa House Majority Leader Rep. Matt Windschitl, R-Missouri Valley, said the work done at the Capitol should be looked at through the lens of freedom and that is what Iowa Republicans have worked for during the past six years while they have held the majority.

“How does this policy make Iowans more free?” Windschitl said in his opening remarks.

Sen. Zach Wahls, D-Coralville, said to keep Iowa’s schools and economy open, and to protect the state’s health care system, every Iowan must get fully vaccinated. That, he said, is the only way to defeat the pandemic.

“Republicans politicize this pandemic, obviously from the beginning. And so, unfortunately, only Republicans can depoliticize it,” Wahls said.