Gov. Kim Reynolds pitched changes to Iowa's tax system and workforce recruitment strategies in her Condition of the State address on Tuesday. Here are the facts behind the speech. 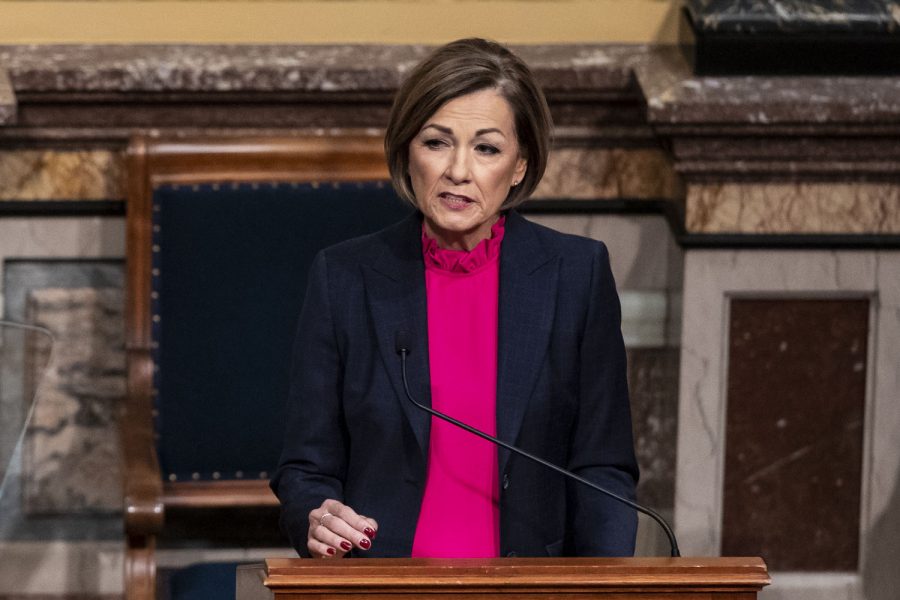 Iowa Governor Kim Reynolds delivers the Condition of the State address at the Iowa State Capitol in Des Moines, Iowa, on Tuesday, Jan. 11, 2022. During the State address, Reynolds spoke about childcare, Iowa teachers, material taught in schools, unemployment, tax cuts, and more. Reynolds announced she will be introducing a bill to reduce unemployment benefits from 26 weeks to 16 weeks while making sure that those collecting unemployment can’t turn down suitable jobs.

Gov. Kim Reynolds advocated for tax cuts, policies to shore up the state’s workforce and education transparency during her annual Condition of the State Address before a televised, joint session of the Iowa House and Senate the evening of Jan. 11, 2022
Reynolds also touted previous accomplishments like broadband infrastructure, mental health funding, and the “Back the Blue” act.

Gov. Kim Reynolds was ready to tout achievement when she stood before a joint session of the Iowa House and Senate Tuesday evening, Jan. 11. Such is the nature of the annual Condition of the State address, a ritual in which Iowa’s governors emphasize what they have accomplished but also states the direction they want the state to take in the coming year.

“When US News and World Report ranked Iowa the number one state for opportunity last year, it wasn’t because we wanted it,” she said at the beginning of the speech. “It was because we earned it.”

Beyond the feel-good news, Reynolds introduced several dramatic proposals for the next legislative session:

a flat 4% income tax rate,
repealing income taxes on retirement income,
$1,000 incentives for teachers who stay on the job during the COVID-19 pandemic,
requiring schools to publish what they teach and telling parents what books are in school libraries,
providing funds for parents who want to customize their child’s education,
capping unemployment benefits at 16 weeks and making sure those drawing the benefits take what she called suitable jobs, and
reducing licensing requirements for professions while also offering ways for high school students to enter professions, including those in healthcare, with initial training.

The Daily Iowan and PolitiFact Iowa took a look at some of the items in Reynold’s speech.

“Last year, the state ended with a $1.2 billion surplus, on top of nearly $1 billion cash reserves.”

Reynolds is right on the budget surplus. Iowa ended fiscal 2021 with a $1.24 billion surplus, around four times its surplus in the past two years. Republican leaders have pointed to this surplus as evidence the state is collecting more than necessary, and income taxes should be reduced.

“This is something every Iowan can understand,” House Speaker Pat Grassley said on Monday. “The state is taking in more in tax money than it needs. And Iowans deserve their money back.”

The surplus had less to do with income taxes and more to do with the presumed one-time circumstances of the pandemic.

Tax revenue was up 11.7% over the previous year, according to the nonpartisan Legislative Services Agency. There were large increases in revenue from corporate taxes – 26.7% – and sales taxes, at 16.7%. Income tax revenue over the same year increased by 6.1%. The agency attributed the revenue increases to pent up demand after lower spending in the beginning of the pandemic, combined with federal stimulus payments.

But Democrats say the American Rescue Plan passed in 2021 has had a lot to do with Iowa’s financial position. Iowa received $1.48 billion from the plan, according to the Treasury Department. “The American rescue plan is in no small part responsible for a large part of the surplus that we see today,” Senate Majority Leader Zach Wahls said in a press conference hosted by the Iowa Capitol Press Association on Jan. 4.

“Iowa is better positioned than most, with the ninth highest labor participation rate in the country. But we’re still down from where we were at the beginning of 2020.”

According to Bureau of Labor Statistics data from November 2021, Iowa was indeed ranked ninth of the 50 states in labor force participation rate, with 66.8% of working-aged people participating in the workforce, compared to a national average of 62.4%.

In 2021, Iowa unemployment decreased while employment increased, according to the same data. Iowa was able to add 1,000 nonfarm jobs in October and, since April 2021, Iowa added a total of 22,300 jobs.

In comparison to states around Iowa, Illinois had a high of 7.7 percent in its unemployment rate. The highest Iowa’s unemployment rate was during the month of July at 4.1 percent, according to  the National Conference of State Legislatures.

But Iowa still hasn’t fully recovered from the pandemic hit. In January of 2020, Iowa had 1.59 million people employed. In november of 2021, that sat at 1.54 million, according to Iowa Workforce Development data.

“It starts with full transparency. All schools should be required to publish what they’re teaching. There’s no reason to hide it—at least no good reason. The same goes for the books in the library. Parents should know what their kids have access to, and they should have a timely process to address their concerns. Because when our parents are fully informed, they can make informed choices.”

The intent here is for more details about specific class discussion and reading materials that have upset conservatives. The state of Iowa publishes details about what is to be taught in private and public schools and for home schooling. The requirements deal with academic expectations but do not address sexually explicit material or particular world views that parents with a variety of opinion want expressed.

In one public instance of concern over school library books, “Gender Queer: A Memoir,” by Maia Kobabe, was pulled from the shelves by the Ankeny school district.

“The Biden Administration has focused almost all of its efforts on electric vehicles, actively working to eliminate gas-powered cars.”

Iowa Republicans have derided President Joe Biden’s climate goals before, and PolitiFact Iowa has checked similar claims in the past.

Incentivizing and promoting electric vehicles is certainly a big part of Biden’s climate agenda. In 2021, Biden signed an executive order setting a target for all new vehicle sales in the U.S. to be electric vehicles by 2030. The order isn’t legally binding, but it has support from auto manufacturers, according to Reuters.

The federal infrastructure bill passed in November included money for a nationwide network of electric vehicle chargers, and the proposed Build Back Better plan includes provisions to reduce the number of gas-powered cars on roads, including a tax credit for families purchasing electric cars.

But to say that Biden is actively working to eliminate gas-powered cars is an exaggeration. His administration has been intent on increasing the prevalence of electric vehicles, but he has not proposed eliminating gas-powered cars entirely or made it a policy goal.

“In the last eight months alone we Invested $300 million more in broadband, strengthened funding for mental health by making it more sustainable, made our communities safer and supported our law enforcement, encourage more quality housing, extended and expanded our water quality efforts, repealed the inheritance tax on families, gave parents more choices in their child’s education, protected life, and expanded telehealth services to increase access to affordable health care across every part of our state.”

Continuing Iowa’s rural broadband expansion program in fiscal 2023, which begins July 1, builds on work already done through The Empower Rural Iowa Broadband Grant program that is part of the Empower Rural Iowa initiative. Reynolds established the program by an executive order in 2018 to reduce spots in rural Iowa unserved or underserved by broadband service.

To date, the grant program has doled out more than $880 million for about 115,000 homes, schools, and businesses, the governor’s office reported at the beginning of January.

We wrote about some of the politics connected to this program after Reynolds announced $210 million in broadband expansion grants, funded by federal dollars, to go with $100 million the state provided in its last session.

The state shifted mental health services administration from individual counties to service regions funded by the state in 2021. The change was made as part of a tax reform bill that cut income and property taxes.

Iowa passed in 2021 a “Back the Blue” act, which increased penalties for crimes connected to protest-related crimes and added protections for police from being sued. The law was expected to increase demand on the Department of Correctional Services and, while the full impact was not known, could have a negative impact on Black Iowans for some crimes, Iowa’s nonpartisan Iowa Legislative Services Agency reported. That especially would be true with the crime of rioting, for which 71% of the people arrested in Iowa for rioting in fiscal 2020 were Black, the agency reported.

That tax reform law also included ways to provide good, affordable housing for Iowans, through tax credits for local housing trust funds and a new disaster recovery housing assistance fund. The law increased the state funding cap for the housing trust funds from $3 million to $7 million. The Legislature did not enact rent restrictions that mobile home resident advocates have pushed but passed for Reynolds’ April 2021 signature a law allowing landlords in the state to reject Section 8 vouchers from renters.

The governor announced in December a new program, the Iowa Conservation Infrastructure Project, that included allocating $100 million for water infrastructure and conservation. The money comes from the federal American Rescue Plan, which Reynolds opposed because of how funding was awarded.

This, too, is in the tax reform law. Taxes on property inherited from someone who has died will be phased out in steps until Jan. 1, 2024, when the tax will be eliminated.

Reynolds signed a bill loosening state requirements for transferring from one public school district to another for reasons ranging from being in a district that does not respond adequately to a student’s ability to learn to a district discontinuing a sport in which a student is involved. The law also requires schools to lead kindergarten-through-12th grade students in saying the Pledge of Allegiance, although students are not required to say the pledge if the students or parents have objections to doing so.

The Iowa House and Senate approved placing a state constitutional amendment before voters that states that the constitutional right to an abortion or government funding for abortion does not exist in Iowa. Both houses have to approve the proposal again in either 2023 or 2024 before Iowa voters can decide whether or not to adopt the amendment.

Reynolds issued a public health disaster proclamation in June that, among other things, says insurance companies can pay health care providers different rates, depending on whether a medical visit was made in person or online.

“And that’s why I’m proud of the tens of thousands of Iowa educators who stayed in the classroom when so many in other states did not.”

A lot is connected to this statement, including a proposal to give $1,000 retention bonuses to teachers who decide to stay in the classroom to teach while Iowa deals with the COVID-19 pandemic and will continue to do so in the coming year. But it also deals with how Iowa is faring with the pandemic.

All 99 of Iowa’s counties remain in high community transmission based on the Center for Disease and Prevention’s COVID Data Tracker. More than 8,000 Iowans have died from COVID-19, with 671,163 total cases in the state since 2020. As of Jan. 9, 886 patients were in Iowa hospitals for COVID-19 infections including 190 in ICUs across the state. The state’s coronavirus website also shows hospitalization and positive tests increasing. Both remain below late 2020 numbers, but above all 2021 records.

Test Iowa, the Iowa Department of Public Health and the State Hygienic Lab’s COVID-19 testing program, is currently prioritizing at-home saliva test kits with pick-up and drop-off locations or mailing options. These tests remain free for users. Previously, there were test sites across the state.

Iowa Public Radio, “How Has The COVID-19 Pandemic Changed Telemedicine in Iowa?,” by Natalie Krebs, July 1, 2021

The Center for Disease Control and Prevention, COVID Data Tracker

The White House, The Build Back Better Framework