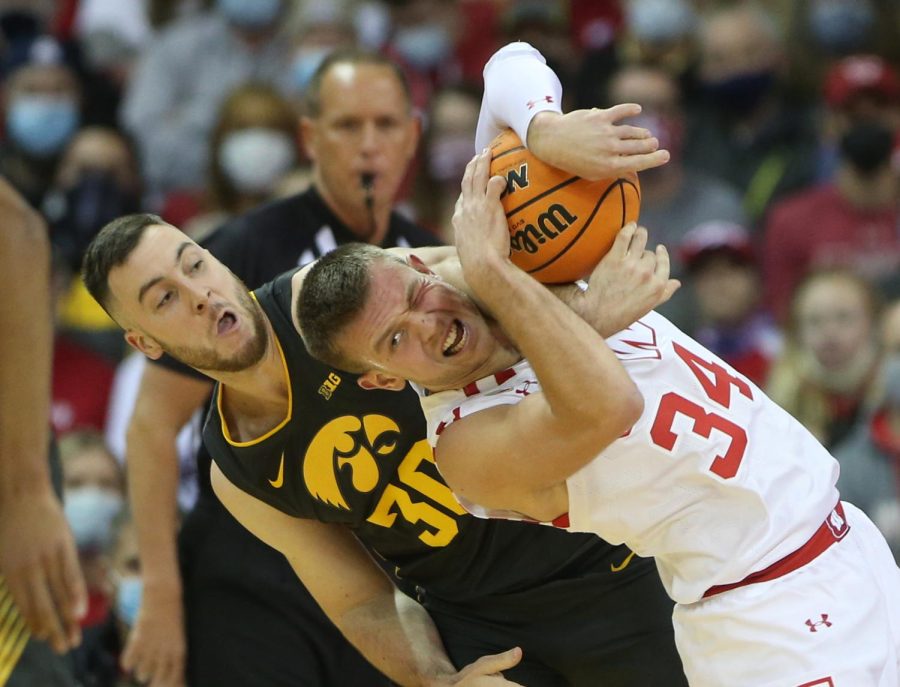 Eighteen NBA scouts were in attendance to watch Iowa forward Keegan Murray and Wisconsin guard Johnny Davis, both potential lottery picks in the 2022 NBA Draft, take the floor at the Kohl Center on Thursday night. Those scouts weren’t disappointed in the show they got to see.

Well, they were if they were hoping for a competitive game.

Murray, the nation’s leading scorer and the reigning Big Ten Player of the Week, scored 27 points and added five rebounds and three blocks in Iowa’s (11-4 overall, 1-3 Big Ten) 87-78 loss to No. 23 Wisconsin (12-2. 3-1). Davis, the nation’s third-leading scorer, accounted for 26 points (including 19 in the first half), nine rebounds, and five assists in a game the Badgers led by 13 points at halftime and 18 with only a couple minutes remaining. The latest in the game in which Iowa had a lead was when the Hawkeyes led 4-2 early in the first half.

Wisconsin entered the game ranked 12th in the conference in rebounding margin. That didn’t stop the Badgers from besting the Hawkeyes, 43-26, on the boards.

Murray, fresh off a career-high 35-point performance against Maryland, left the game and went to the locker room after landing awkwardly in the second half. The sophomore quickly returned to the floor, which may have been the only positive sign for Iowa against Wisconsin.

Iowa dropped its fourth game of the season on Thursday and its third against a top-25 opponent on the road (Purdue and Iowa State being the other instances).

This was the only regular season meeting against the Hawkeyes and the Badgers. Iowa swept all three meetings between the programs last season, with one of those games coming in the Big Ten Men’s Basketball Tournament.

Iowa point guard Jordan Bohannon, a sixth-year senior, set the NCAA men’s basketball record by playing in his 158th college game on Thursday. Bohannon finished with 12 points, even though he didn’t attempt his first shot until the 3:20 mark of the second half.

Iowa will not return to the floor until a home contest against Indiana on Jan. 13 at Carver-Hawkeye Arena. The game is scheduled to tip off at 8:07 p.m. and will air on FS1.