A Citrus Bowl loss was a tough end to the season for the 10-4 Hawkeyes. 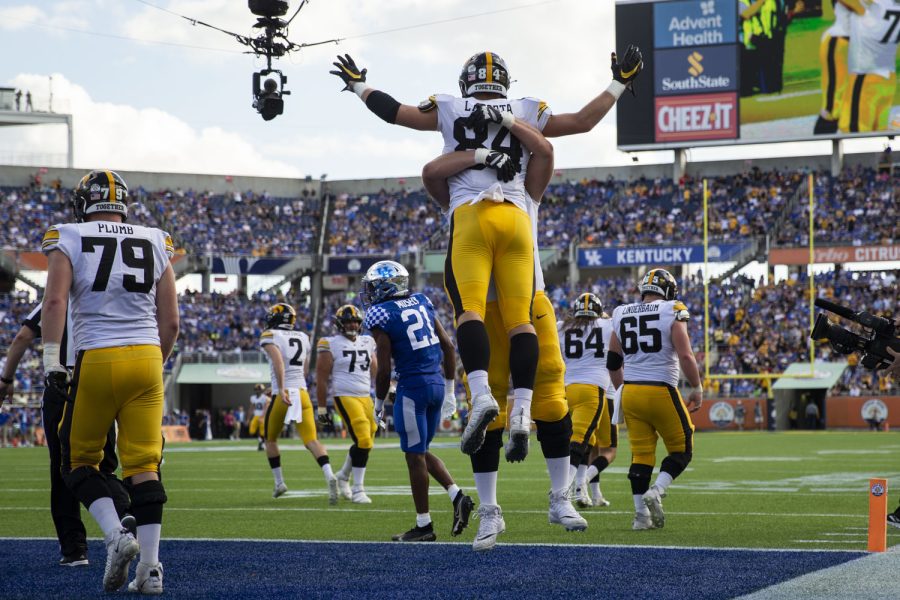 Iowa offensive lineman Mason Richman lifts up Iowa tight end Sam LaPorta during the 2022 Vrbo Citrus Bowl between No. 15 Iowa and No. 22 Kentucky at Camping World Stadium in Orlando, Fla., on Saturday, Jan. 1, 2022. The Wildcats defeated the Hawkeyes, 20-17.

ORLANDO, Fla. — Daily Iowan Pregame Editor Robert Read graded the Iowa football team’s performance in all three phases after the Hawkeyes’ 20-17 loss to Kentucky in the Citrus Bowl.
Offense — C-
It all comes down to turnovers. “It,” in this case, turned out to be winning or losing the Citrus Bowl. Iowa quarterback Spencer Petras threw three interceptions and the Hawkeye offense turned the ball over on downs on another occasion. Those things overshadow an offensive performance that I thought showed some promise.

Both true freshmen running backs (Gavin Williams and Leshon Williams) were productive for an Iowa team that tallied 173 yards on the ground. And the screen pass game looked as good as it had the entire season, most notably on a 36-yard touchdown to tight end Sam LaPorta. The offense was efficient in the second half, even without Tyler Goodson and Keagan Johnson.

It just all came down to turnovers.
Defense — B+
So Iowa’s pass rush waited to face an offensive line that was a finalist for the Joe Moore Award to dominate? I guess so. The Hawkeyes tallied six sacks and nine tackles for loss against the Wildcats. In the secondary, Jermari Harris played his best game of the season and picked off a pass late in the game.

What cost the Hawkeyes defensively were two long touchdown drives they allowed to the Wildcats: one to start the game and the other to end it.
Special teams — B
Nothing all that notable out of Iowa’s special teams unit on Saturday. Caleb Shudak made his field goal attempt. Tory Taylor averaged 50 yards per punt  (although pinning Kentucky a little deeper on its game-winning drive could have helped). If anything, maybe I’m nonsensically bringing this grade down a little because Iowa head coach Kirk Ferentz should not have punted on the fourth-and-1 play late in the game.