The Hawkeyes finish the season with a 10-4 record. 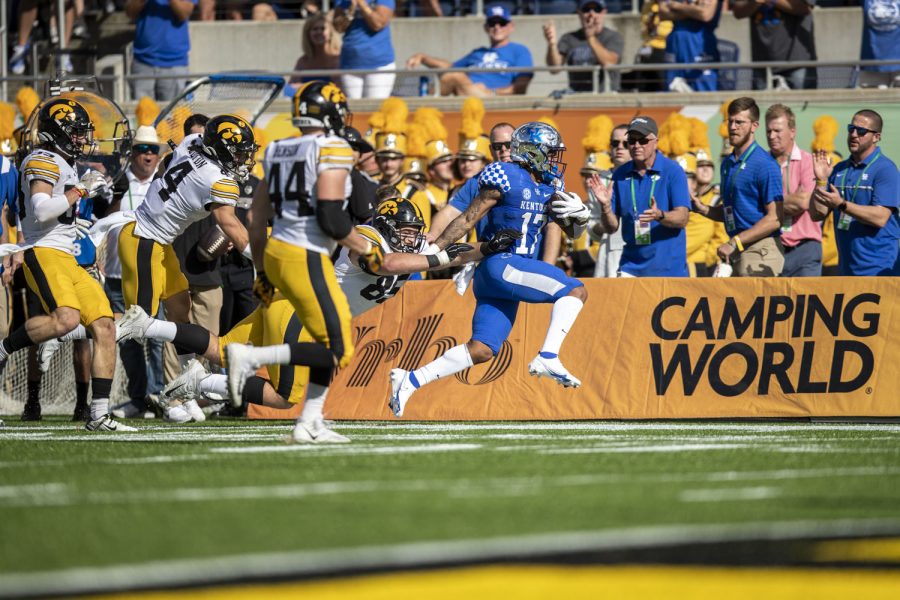 Kentucky running backJuTahn McClain carries the ball during the 2022 Vrbo Citrus Bowl between No. 15 Iowa and No. 22 Kentucky at Camping World Stadium in Orlando, Fla., on Saturday, Jan. 1, 2022.

ORLANDO, Fla. — The No. 22 Kentucky football team scored a game-winning touchdown with one minute and 48 seconds remaining in Saturday’s Citrus Bowl to defeat No. 15 Iowa, 20-17.

Iowa quarterback Spencer Petras threw his third interception of the game on the next Hawkeye possession to seal the Wildcats’ win. Fans were very active on Twitter during and after the game.

Below are a variety of their reactions.

Thinking about another season of a Petras-led Iowa offense pic.twitter.com/hlp8GtZIoK

LB Jack Campbell now with 137 tackles, the most in a season since Josey Jewell in 2017. #Hawkeyes

How Iowa fans hit the whiskey bottle while watching this offense pic.twitter.com/himaUllP6D

After Spencer Petras answered his final question today, he said, “See you next year.”

He also had this message for Iowa fans. (Resend) pic.twitter.com/KvHkCyXt85

The Hawkeye Wave made it to Orlando for the Citrus Bowl. 👋 pic.twitter.com/CTtFgigDqX

If you’re the Iowa staff and you don’t see the problems with your offense…not sure what to say at this point. Can’t march this thing out the same way in ’22 and expect it to work. Need to make the tough decisions that give you a better chance to win on offense

iowa was a QB away from losing by 30 to Georgia

Hats off to Tyler Linderbaum, hell of a career at Iowa and set a new high watermark for OC with his play in ’21. Still remember him swapping back over to OC from DT years ago in bowl prep & thinking ‘must be something to it’ and damned if there wasn’t, one of the all time greats

As loyal as they come.

Thank you for supporting us all season long, Hawkeye Nation.

Real proud of that group right there. Nothing for them to hang their heads about. #Hawkeyes pic.twitter.com/s9Xd6jqseZ

Leshon Williams steamrolled this guy all the way to Counciltucky pic.twitter.com/u9DVmGQ4um

4 minutes into 3Q, Ohio State and Utah have scored 9 TDs. That’s more than Iowa has scored all year.