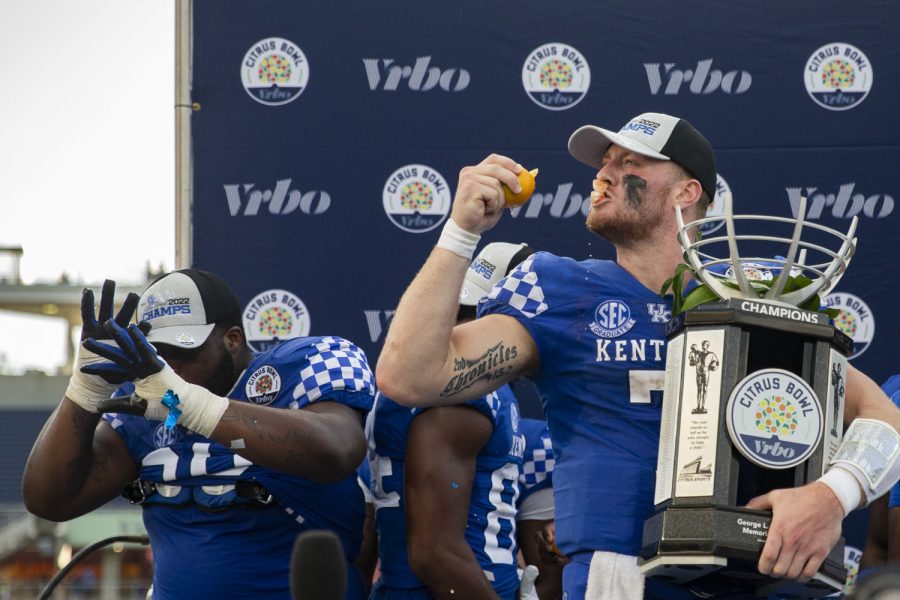 Kentucky quarterback Will Levis eats a whole orange while holding the Citrus Bowl Trophy after winning the the 2022 Vrbo Citrus Bowl between No. 15 Iowa and No. 22 Kentucky at Camping World Stadium in Orlando, Fla., on Saturday, Jan. 1, 2022. The Wildcats defeated the Hawkeyes, 20-17. During a press conference earlier in the week, head coach Mark Stoops was asked about Levis eating a banana with the peel.

Iowa and Kentucky matched up for the 75th anniversary of the Citrus Bowl on New Year’s day at Camping World Stadium in Orlando, Fla. The Wildcats defeated the Hawkeyes, 20-17.

Former Nebraska Cornhusker, Wan’Dale Robinson, led the Wildcats in receiving with ten receptions for 170 yards. Former Penn State quarterback Will Levis threw for 233 yards and a touchdown. Robinson won the player of the game for the Wildcats.

Iowa quarterback Spencer Petras started and played the whole game after recently rotating with Alex Padilla. Petras threw three interceptions in the game but completed 19 passes on 30 attempts for 211 yards and a touchdown. Iowa head coach Kirk Ferentz wants both Spencer Petras and Alex Padilla to stay for the upcoming 2022 season.