Critiquing Petras is one thing. Being demeaning is another. Petras took time after Iowa's loss in the Citrus Bowl to send a message to Hawkeye fans. 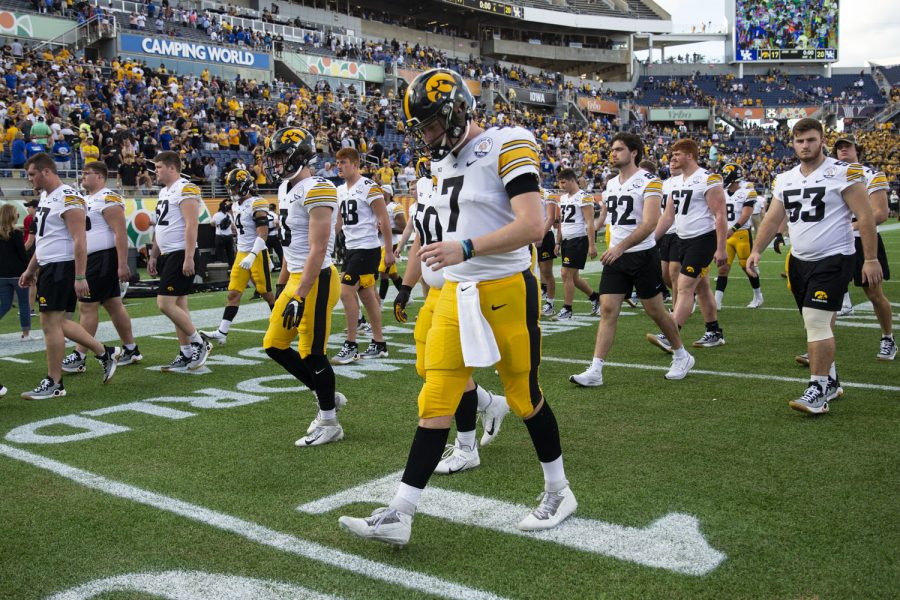 Iowa quarterback Spencer Petras walks off the field after the 2022 Vrbo Citrus Bowl between No. 15 Iowa and No. 22 Kentucky at Camping World Stadium in Orlando, Fla., on Saturday, Jan. 1, 2022. The Wildcats defeated the Hawkeyes, 20-17. Petras through as interception at the end of the game which gave Kentucky possession of the ball.

ORLANDO, Fla. — Quarterback Spencer Petras stood in front of a white brick wall just around the corner from Iowa’s locker room at Camping World Stadium about half an hour after the end of the Citrus Bowl. The harsh Florida sun was shining on his face. Reporters surrounded the redshirt junior as he paused before answering his final question of the day.

And the answer was as thoughtful as it was saddening.

No. 15 Iowa had just lost its bowl game, 20-17, to No. 22 Kentucky. Petras accounted for 211 passing yards and a touchdown on the day. But what stands out more are the three interceptions he threw, including the one on Iowa’s final drive with less than a minute to go that sealed a Kentucky victory. Petras may not be “the guy” for Iowa at quarterback. There’s no question he needs to play better if he wants another shot at being the starter next season. But no matter Petras’ performance, he deserves so much better from the Iowa fanbase.

I made my way over to hear from Petras near the end of his interview after the game, right as he took a question from The Des Moines Register’s Chad Leistikow. The signal caller was asked, now that Iowa’s season is over, what his message to Hawkeye fans would be.

“I guess,” Petras said before pausing, and it was unclear if he was getting choked up or trying to carefully articulate an answer, “just remember that my mom reads a lot of the things people say [about him]. I’ve grown my immune system to deal with that — things people say about me.

“But it’s never easy for loved ones, parents, ex-teammates, things like that, to read some of the things people say. Just remember that I’m a human being, as are my parents, and it’s hard for them a lot of the time. I get it. It happens all the time with guys across the country, especially at quarterback. But to have my mom have to see some of the things people say is tough. It’s definitely tough to see her emotions about it. I try to tell her that it doesn’t matter, but it’s easier said than done. I guess that’s what I would say.”

There’s a difference between criticizing Petras’ play and making personal attacks toward him.

I think Iowa would be smart to look in the transfer portal for a new quarterback for next season, or to give a younger player like Joey Labas a shot. And I’ve said as much. I’ve also pointed out Iowa’s dysfunction on offense a number of times this season. It’s tough to keep count. And yes, I called for Alex Padilla to start on multiple occasions (and when he did, that didn’t magically fix the offense, almost as if the coaches should be taking more blame than Petras).

But critiquing Petras’ play on the field is fair game. He’s a Big Ten quarterback. This is what he signed up for.

When things get personal (name calling, remarks about someone’s family, other vile things that you can find on social media), things go way too far. Not exactly a great example of “Iowa nice.” And no, this type of behavior isn’t representative of Hawkeye nation entirely. It just sort of seems like it sometimes. I’m not going to cite specific examples that I’ve heard in-person or seen on Twitter, because there’s no need to spread such stupidity. What I can say is that the constant hate Petras gets from the Iowa fanbase takes a toll.

I spoke with Sarah Petras, Spencer’s mom, earlier this season for a story that never quite materialized. But during our hour-long conversation at an Iowa City coffee shop, I got a small glimpse into what Petras and his family deal with.

“It’s very hard not to read it,” Sarah Petras said of remarks about her son. “I’m so glad I don’t do Twitter, because it’s just so brutal. People are just so brutal. No heart at all. They have no trouble speaking their mind because nobody can see them. They’re hurtful. I get screwed up by them. I have to remind myself that it is just people voicing some opinion. It’s hard.”

Petras said he has deleted social media off of his phone to stay away from the hate. Petras’ mother said he is usually the one who talks her down when she gets fed up with what people say about her son.

That maturity isn’t surprising if you’ve been around Petras even a little.

It was on brand that Petras was the first Hawkeye football player out of the locker room to complete his postgame interview. He didn’t have to be there. He knew he would be facing tough questions. I wouldn’t have blamed him for skipping it. But, instead, Petras did what he always does: thoughtfully answered every question with respect and great humility. But I guess that isn’t difficult for someone as genuinely respectful and intriguing to hear from (side conversations with Petras about music and other topics aside from football are always entertaining) as Petras is.

Iowa safety Kaevon Merriweather recently was awarded the Duke Slater Golden Gavel Award, which is given to the Hawkeye football player who “not only is most cooperative with local media, but exhibits themself with professional integrity in all interactions.” Merriweather was a deserving winner. But I voted for Petras, who finished as a finalist, for the reasons I mentioned above.

The California kid is a stand-up guy. That’s much more than I can say about the internet trolls who hide behind a screen and talk tough because they face no consequences.

It’s obvious that, even when he isn’t playing as well as he would like to, Petras has the complete respect of his teammates. Even when he was injured on the bench, backup quarterback Alex Padilla and other members of Iowa’s offense praised Petras for giving them tips and being supportive even though his job could have been on the line.

And Petras’ teammates always come to his defense. It’s easy to see why.

“Spencer, he competed his butt off today,” tight end Sam LaPorta said on Saturday. “… I thought Spencer commanded the offense really well today. You can fault him on a couple interceptions, I guess, but we don’t. It’s a team effort. There are 11 guys out there. You can say what you want about him, but he is a competitor and he is tough as heck.”

If it feels like I’m rambling, it’s because Petras doesn’t deserve the constant attacks that he faces on a seemingly endless basis. Maybe it’s because he’s roughly the same age I am, and I can’t imagine being under that much scrutiny. You don’t think Petras wants to play well? Of course he does. Certainly more than the (hypothetical) drunk middle-aged guy yelling at him from row 46.

I don’t think Petras was asking for sympathy in his response to Leistikow’s question. To me, it seemed like more of a necessary reminder that he is a 22-year-old kid who has a family, and not some lifeless person you see on the field.

Critiquing Petras is one thing. Being demeaning is another.

If you fall into the second category, you’ve got more to worry about than the performance of a college football player — a lot more.