Action between the Hawkeyes and Wildcats will kick off at 12 p.m. 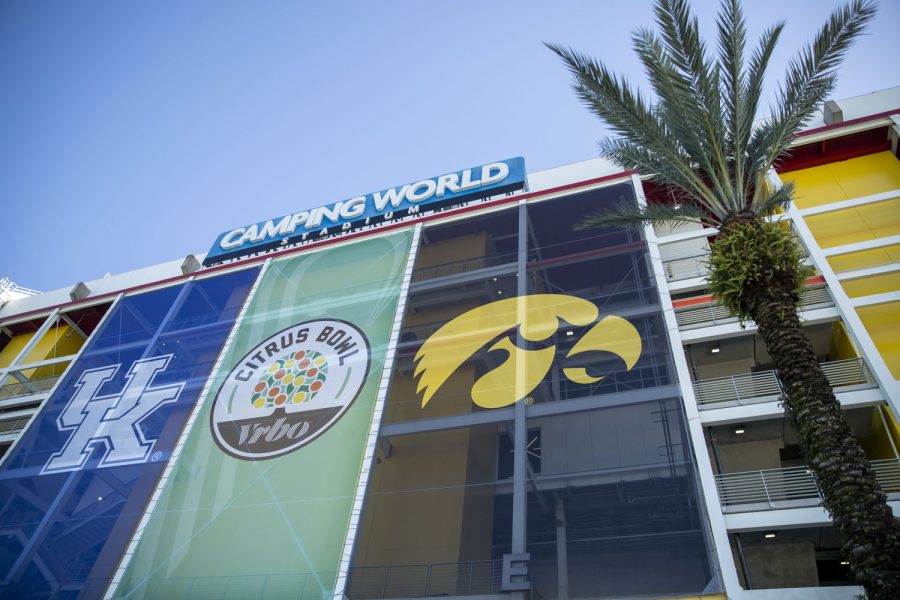 The outside of Camping World Stadium is seen before the Hawkeyes and and Wildcats matchup in the Citrus Bowl at noon CST in Orlando, Fla., on Saturday, Jan. 1, 2022.

ORLANDO, Fla. — No. 15 Iowa and No. 22 Kentucky will meet in the 2022 Vrbo Citrus Bowl at Camping World Stadium at 12 p.m. Saturday. The Hawkeyes and Wildcats have never played each other before.

Iowa and Kentucky have won the Citrus Bowl before. The Hawkeyes did so in 2005 and Wildcats won it in 2019.

The Hawkeyes have won 15 straight nonconference games — the longest such streak in the nation. A victory would also ensure the Hawkeyes are the reigning champions of two bowl games at once. Iowa won the 2019 Holiday Bowl in San Diego, and the 2020 and 2021 Holiday Bowls were canceled because of COVID-19.

PREGAME: Iowa will be without its top weapon in the pass game Saturday. Wide receiver Keagan Johnson was not on the field for warmups before the game. HawkeyeReport.com’s Tom Kakert tweeted that Johnson was injured at practice earlier this week.

Half an hour before kickoff, Iowa Athletics confirmed Johnson would miss Saturday’s game for an issue that is not related to COVID-19.

Third-string quarterback Deuce Hogan and wide receiver Tyrone Tracy will not play in Saturday’s Citrus Bowl. Both of them entered the transfer portal earlier this season.

Iowa’s starting running back, Tyler Goodson, also will not participate in Saturday’s matinee. He declared for the 2022 NFL Draft Dec. 10 and announced he’d be foregoing the Hawkeyes’ bowl game.

Senior Ivory Kelly-Martin and redshirt freshmen Gavin Williams and Leshon Williams will fill in for Goodson.

COIN TOSS: Kentucky wins the toss and defers to the second half. Iowa will receive the ball and defend the north end zone.

5:32 1Q — Kentucky takes nearly eight minutes off the clock on a 13-play scoring drive capped by a Will Levis passing touchdown to running back Chris Rodriguez. The Wildcats lead the Hawkeyes, 7-0.

2:52 1Q — Iowa’s Tory Taylor punts the ball back to Kentucky. The Wildcats will take over 1st & 10 from their own 22-yard line. Iowa’s offense has gained 31 yards in nine plays today.

END 1Q — Iowa gets the ball back from Kentucky and picks up a quick first down. The Hawkeyes will face a 2nd & 2 from their own 42-yard line on the other side of the break. The Wildcats still lead the game, 7-0.

2:48 2Q — Kentucky kicker Matt Ruffolo converts on a 21-yard field goal attempt.  The Wildcats extend their lead over the Hawkeyes, 10-3.

10:54 4Q — Iowa tight end Sam LaPorta scores on a 36-yard throw-back screen from QB Spencer Petras. The Hawkeyes have captured their first lead of the day, 17-13.

1:48 4Q — Kentucky running back Chris Rodriguez finds the end zone from six yards out. The Wildcats convert on the extra point. The Hawkeyes now trail, 20-17.