The Heartlanders held the Mavericks scoreless in the final 35 minutes of the contest. 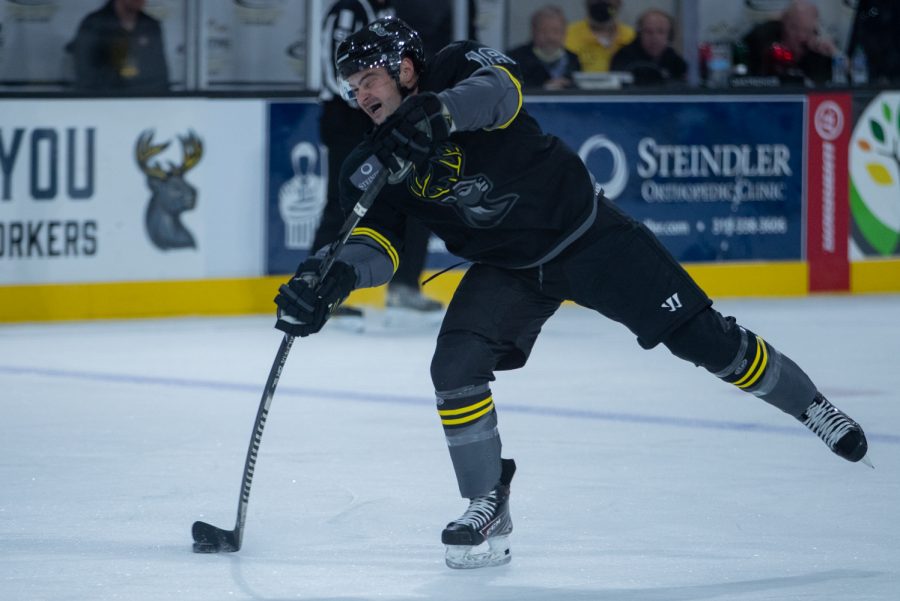 Iowa forward Jack Billings shoots the puck during a hockey match between the Iowa Heartlanders and the Toledo Walleye at the Xtream Arena in Coralville, Iowa, on Saturday, Oct. 30, 2021. The Walleye defeated the Heartlanders 5-2.

Iowa’s Jack Billings scored the contest’s decisive goal with 9:54 on the game clock in the second period. From the point Billings scored to the end of the game, neither the Heartlanders nor the Mavericks found the back of the net.

“A lot of different factors went into it tonight,” Iowa head coach Gerry Fleming said postgame. “I thought we got off to a great start tonight. We followed the game plan.”

Goaltender Jack Berry also played a pivotal role in Monday’s game. The 25-year-old stopped 23 of the 25 shots he faced.

“It feels amazing,” Berry said. “It feels kind of surreal, coming in here and getting the opportunity to play. It was awesome.”

Berry surrendered four goals in the Heartlanders’ Dec. 26 matchup with the Mavericks.

Iowa’s starting goalie, Trevin Kozlowski, took himself out of the Heartlanders’ Dec. 26 game because he felt sick. Fleming said Kozlowski tested negative for COVID-19 on Dec. 26.

Kozlowski did not make an appearance in Monday’s contest.

The 9-13-3-1 Heartlanders earned points for the third consecutive game Monday. Iowa is now up to 22 points in the standings.

The Heartlanders are situated in sixth place in the ECHL Central Division standings. They trail the division-leading Toledo Walleye by 12 points.

Iowa has now won four of the seven matchups it’s played against Kansas City this season. The Heartlanders and Mavericks are slated to meet two more times in 2021-22.

Iowa forward Zach White was active throughout the Heartlanders’ game against the Mavericks. The forward put the puck in the back of the net on a power play, assisted Billings’ decisive score, and found himself in a scuffle with some of his opponents.

White’s one goal, one assist, one fight stat line is known as a Gordie Howe hat trick. The odd hat trick is named after former Detroit Red Wings player and NHL Hall of Famer Gordie Howe, who was known for his versatility on the ice.

“This is the first ever time it’s happened to me,” White said of his special hat trick. “So, it’s pretty awesome.”

The Heartlanders will take Tuesday off before facing the 13-9-0-1 Tulsa Oilers on Wednesday night at Xtream Arena in Coralville. The contest will cap Iowa’s three-game homestand.