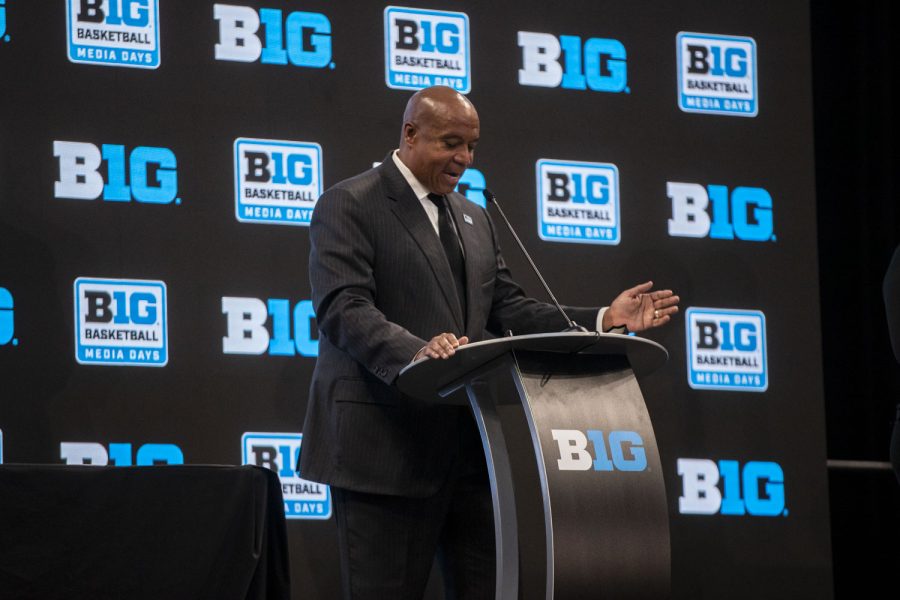 Big Ten Conference Commissioner Kevin Warren speaks at the beginning of Big Ten Basketball Media Days at Gainbridge Fieldhouse in Indianapolis, Indiana on Thursday, Oct. 7, 2021. During his speech, Warren addressed women and men’s sports and his goal to continue to work toward equality.

Under the new rules, the Big Ten will review all canceled or postponed events and determine how it will impact win-loss records.

The league and its Chief Medical Officer, Dr. James Borchers, will work with conference teams to try to reschedule postponed games. Events that can’t be rescheduled will be reviewed by Borchers and other Big Ten officials. After review, games will either be declared “no contests” or forfeitures.

“The conference office and all 14 Big Ten member institutions have been in continuous contact about developments related to COVID-19,” Big Ten Conference Commissioner Kevin Warren said via release. “The well-being of our student-athletes and our entire athletic communities is our top priority, and we are updating our forfeiture policy to support their health and safety as well as the integrity of conference competition.”

The number of available competitors each team has will factor into the Big Ten’s review of canceled or postponed events.

For men’s and women’s basketball, at least seven scholarship athletes and one coach will need to be available for games to be played. If teams do not meet those requirements, they can still play if competition is deemed safe by appropriate personnel.

Men’s and women’s basketball games can also still be canceled, even if teams meet the Big Ten’s requirements for competition.

If a coach or medical staff member believes it would be unsafe for their team to participate, games can be canceled or postponed. In such a case, the contest would not automatically be considered a forfeiture.

If an institution meets the Big Ten’s requirements to play a game but cancels a contest anyway, the school would have to provide circumstantial evidence to prove they did not participate for safety reasons.

Teams slated to face forfeiting teams will also have wins added to their season totals.

Games that are initially postponed, and later can’t be rescheduled, will be considered “no contests.”