Iowa City High School students walked out of in-person classes Thursday morning and gathered on the Pentacrest to protest the pro-life push among legislatures across the country. 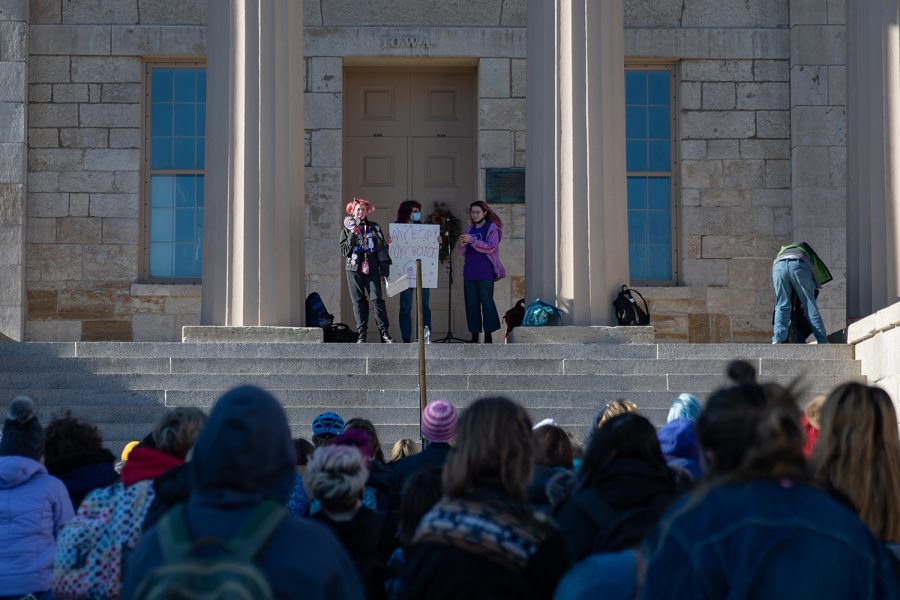 Students from the Iowa City Community School District walked out of class around 11:15 a.m. on Thursday to protest the anti-abortion agenda of lawmakers across the country on the University of Iowa’s Pentacrest.

The protest, which protest organizers said was arranged in a school bathroom during the students’ advisory period, occurred in the wake of the Texas abortion restrictions and attempts from lawmakers to replicate Texas’s laws.

Lillian Waite, a first-year Iowa City High School student and organizer of the protest, said she missed a history test to participate.

“I wish that I could be in school right now,” she said. “But instead, I’m here organizing a protest and doing all this.”

Waite said the issue of abortion rights affects her both as a woman and as someone in a lower financial class.

“If I get assaulted, or if I get pregnant, I’m lower class and I’m poor,” Waite said. “So it would be not that easy for me to get an abortion, especially with how it’s not covered in Medicare and in federal funding.”

Waite said she feels it’s a misconception that those with unwanted pregnancies can easily put a child up for adoption, saying she believes the adoption system is corrupt and tends to cause trauma in individuals who go through the system.

According to Finally Family Homes, a nonprofit program, more than 20,000 kids aged out of the foster care program in 2019, 20 percent of whom ended up homeless. A large body of research has indicated adopted children are more likely to experience mood disorders including anxiety or depression.

Rebecca Evans, a UI senior majoring in social work, said adoption is not an adequate replacement for abortion. Evans gave a speech at the protest.

“We don’t have a well-resourced welfare system for children. It’s struggling and it’s underdeveloped,” she said in the speech. “So, by adding more kids to it, we’ll continue to worsen the lives of those already involved.”

She added that if Roe v. Wade is overturned, 26 states are poised to immediately ban abortion, including Iowa.

“Abortions will still happen, just illegally and unsafely,” Johnson said. “There are statistics out there that when abortion is banned, the pregnancy death rates rise pretty high.”

A study from the University of Colorado Boulder said that banning abortion nationwide could lead to a 21 percent increase in the number of pregnancy related deaths.

Violet Whiting, an Iowa City High School first-year student and organizer of the protest, said she believes there are hypocrises in the pro-life agenda, pointing out that some people who agree abortion should be illegal are also those who disagree with promoting strict gun regulations to limit the number of mass shootings.

“This is just about control and controlling women’s bodies,” they said.

Whiting said men can help the cause as well by simply listening.

“Leave room for the people who are affected by it to speak,” Whiting said. “Uplift them and support them, and just listen to what they’re telling you.”

Whiting said what they’re doing at the protest is more important than school.

“Think about if I got pregnant, and you took away my access to abortion. Think about how much other school I’d be missing then,” Whiting said. “… I’ll be fine. I’m caught up on assignments. I feel like this is important because the school needs to be actively advocating for their students. And as students, we can show what we believe in by leaving the school and [protesting].”