Grace Palmatier, graduating from the UI nursing and ROTC programs at the end of the semester with a new rank in the U.S. Air Force, will head to Arizona to complete her training. 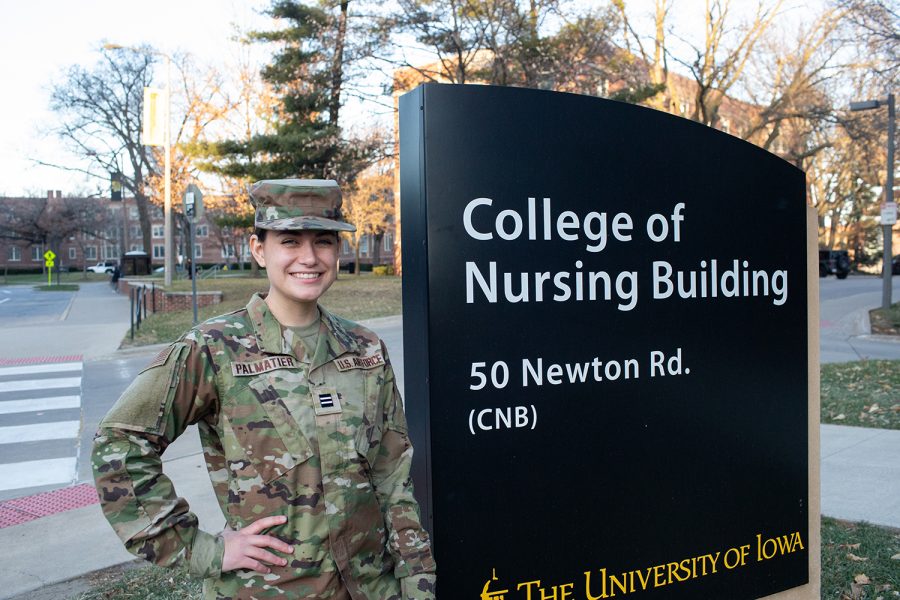 As Grace Palmatier graduates from the University of Iowa’s nursing program and the UI ROTC this winter, she looks to Arizona, where she will take the next steps in her career as a nurse for the U.S. Air Force.

Palmatier said that after graduating at the end of this semester, she intends to take a break to recharge and spend time with friends and family. In March of next year, she will begin her final training to be a nurse in the Air Force with the nurse transition program.

Palmatier will also be conferred the honor of Distinguished Graduate, something given to only the highest achieving cadets.

“The distinguished graduate honor is something that candidates compete for on a national level,” Anderson-Gonzalez said. “And essentially, what’s required is we will submit a package and really that’s like, a really robust resume.”

Leadership positions, performance as underclassmen and upperclassmen, and individual profile are among the items considered when giving the distinguished graduate award, Anderson-Gonzalez said.

Palmatier spent her final semester at the UI interning at the UI Hospitals and Clinics, she said. At the hospital, she worked in the surgical and neurological intensive care unit, which receives a wide variety of patients.

“Depends on the operation, of course, but surgical patients, neurological aspects like stroke seizures,” she said. “We had a lot of trauma patients from the emergency department. Once they were stable enough, they would come up to the surgical ICU.”

Palmatier did not graduate on time with the rest of her class in the spring of 2021. Instead, she stayed to fulfill a semester internship required for her to finish her nursing degree.

When Palmatier graduates, she will also be commissioned as a Second Lieutenant in the U.S. Air Force.

Palmatier’s commissioning ceremony will take place on Dec. 17, where friends and family will come together to celebrate her accomplishments.

Capt. Amanda Anderson-Gonzalez, a recruiting and admissions officer with UI ROTC, said Palmatier will receive gifts from different cadre members, and Palmatier will say a few words. Palmatier will also speak her oath of office, which will be administered by an officer she selected.

“During the military, you obviously have to sign a contract and there’s a ceremonial oath that you take,” Anderson-Gonzalez said. “It’s essentially a very long-winded promise.”

Palmatier is the only ROTC member graduating at the end of this semester. She said it is a normal step to become a Second Lieutenant after graduating from the ROTC program, but graduating is the hard part.

“I started with about 30 people in my class freshman year, and that last semester, my class graduated four or five,” she said.

Palmatier decided she wanted to be in the U.S. Air Force in high school because of her family ties, she said. After deciding that enlistment was not the route she wanted to take, Palmatier joined ROTC in the fall semester of her freshman year.

During their underclassmen years, ROTC members learn the basics, she said.

“Freshman year, especially, you learn how to march and salute, stuff like that. And then sophomore year, it’s really like intense training, getting you ready for field training in the summer,” she said.

Field training takes place at the Maxwell-Gunter Air Force base in Montgomery, Alabama, Palmatier said. ROTC members are flown out in the summer of their sophomore year.

“Once you’re there, you’re put into flights with a bunch of random cadets and you just spend two weeks there,” she said. “You live there. You march around and do field exercises and leadership exercises, stuff like that, and you’re evaluated the whole time.”

After passing this field training, Palmatier returned to the UI and continued her ROTC training, but the focus shifted more to learning leadership skills, she said.

“Once you’re back from that, and you’re an upperclassman, your training is more focused on officers, specific things,” Palmatier said. “You know what it’s like to be in the military now. You need to learn how to manage people and lead people and part of that is training the underclassmen and yourself.”

After Palmatier completes all her required training, she will be stationed in Las Vegas, Nevada, at Nellis Air Force Base right outside of the city. She said she looks forward to taking the next step in her life.