FemmeDecks, a DJ collective in Iowa City that aims to empower women, people of color, and the LGBTQ+ community, held a DJ workshop to teach basic skills and provide access to equipment. 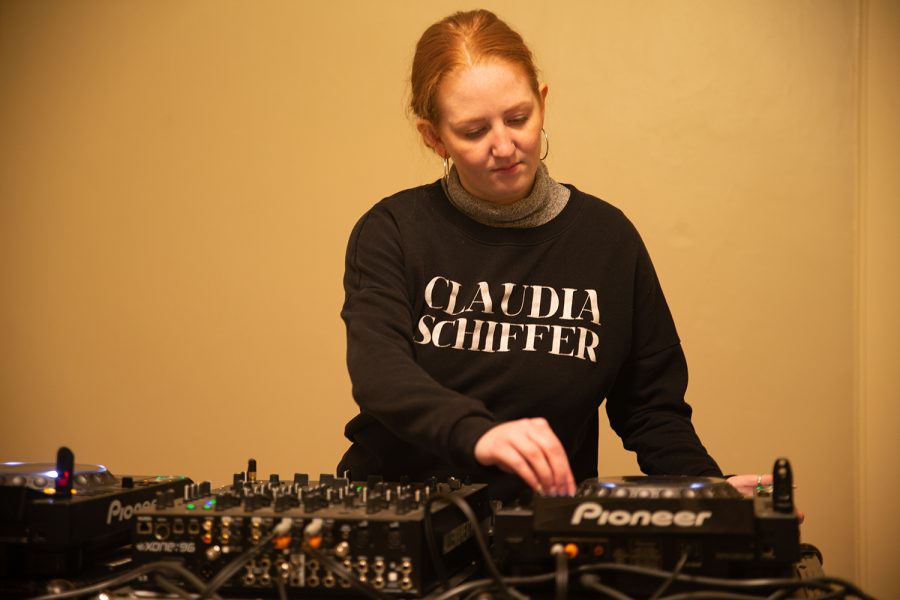 Iowa City resident Angelia Mahaney demonstrates how to use a sound board at a DJ open house in Iowa City on Saturday, Dec. 11, 2021. Mahaney is a part of the collective Femme Decks which hosted the event. Femme Decks aims to inspire women and minority groups to become active in the digitally manipulated music community.

In the world of electronic music making — an area dominated by straight white men — FemmeDecks is an Iowa City based collective that aims to empower women, people of color, and the LGBTQ+ community.

Femmedecks was born at Gabe’s, where it was founded by University of Iowa alumni Angelia Mahaney and Nina Kintsurashvili in 2019. The two had DJ’d together at the bar on Washington Street and bonded during a conversation about the lack of female DJs in Iowa City.

After graduating, Kintsurashvili moved back home to Tbilisi, Georgia, but taking on the project of starting a music collective alone didn’t slow Mahaney. FemmeDecks was still relatively new when Kintsurashvili moved, so the group has grown exponentially since then.

“We were still trying to get connected and find other people that were interested in doing this too,” Mahaney said. “A lot of what I’ve done with connecting with new people and booking new DJs that are not just [white, cisgender, heterosexual] men has been after [Kintsurashvili] left, and also during the pandemic.”

FemmeDecks is dedicated to creating a safe and inclusive environment for marginalized artists to engage with each other, said Liara Kaylee Tsai, who joined the collective in May of this year. She said one of her biggest goals within the group is to emphasize that FemmeDecks is a safe place for members of underrepresented communities in electronic music.

Tsai had a following in Madison, Wisconsin, before moving to New York City. After moving back to the Midwest in April, she heard about FemmeDecks and its mission.

Tsai said she had never heard of a group that performs live with FemmeDeck’s goals in mind.

RELATED: The Northside Concert Series looks to expand for the 2022 performances

“It felt really good to have that kind of acceptance and representation,” Tsai said. “I just really appreciate what the organization is trying to do.”

Andrés Mora Mata, originally from Caracas, Venezuela, is another member of the collective who DJs at events and helps to organize them.

Mora Mata said he’s seen similar groups in places like Berlin and Spain, but it’s special to have a group in Iowa City that pushes local diversity.

“Having that change of status quo really means that people are being provided with both the spacing which they can be free and just enjoying dancing — when that’s what we’re trying to provide — and also a change of what is usually just cis white men doing their thing, and you know, running the show,” he said.

Mora Mata said he sees Saturday’s DJ workshop at Public Space One’s Close House Space as one of FemmeDecks biggest successes. The workshop was open to people from all levels of expertise in DJing.

The space allowed people who are new to DJing, or interested in getting into the field, with the opportunity to work with equipment they wouldn’t otherwise have access to. They were also taught fundamental knowledge like how to organize a track list and what software to download.

Mahaney said she was held back from DJing for a long time because she subconsciously believed it was something only for men to do. She said she hopes the workshop will alleviate some of that thinking by providing a safe space to explore and try something new.

“I think that a lot of women have this thought in their heads all the time,” Mahaney said. “I think that just getting it out there that yeah, women can DJ — like women do have the taste in music and technical skills and knowledge — will hopefully encourage more people, more women, to start DJing.”