Having access to a safe abortion is critical to reproductive health care and safety. 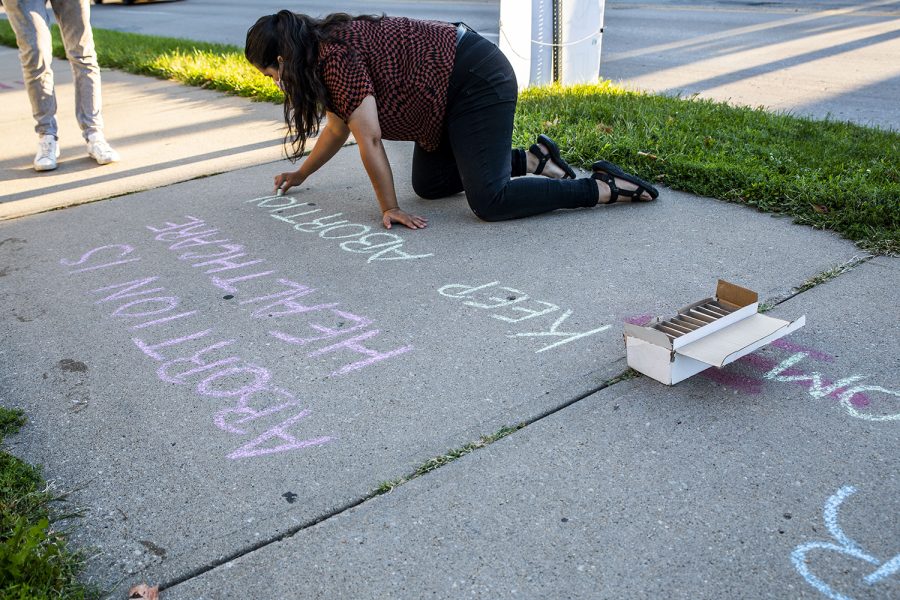 Madelaine Todd writes a pro-choice message on the sidewalk outside the Emma Goldman Clinic on Thursday, Sept. 9, 2021.

Efforts made by multiple states, including Iowa, to deny the right to an abortion have set a dangerous path for the future of reproductive health care and safety on a dangerous path.

In May, Texas Gov. Greg Abbott signed what is referred to as the “heartbeat bill” into Texas law, banning abortions at approximately six weeks. However, this was different from other abortion bans because it included a provision that greatly expanded who can take legal action under the law.

The provision allows any individual to sue anyone who provides an abortion or helps a patient access abortion care prohibited by this law. While a state judge recently declared the law unconstitutional, it still cannot be stopped from being enforced. The U.S. Supreme Court also decided on Friday not to block the law, but more challenges could come.

Now, the Supreme Court is weighing the constitutionality of a Mississippi law that bans abortions after 15 weeks of pregnancy. Although a decision isn’t expected until summer 2022, the ruling will set a crucial precedent for other states to follow.

Almost 50 years ago, the Supreme Court established the constitutional right to an abortion in the case of Roe v. Wade. The Daily Iowan Editorial Board stands firm with this ruling and believes these limitations set a dangerous future for the country — especially for states like Iowa.

Iowa is notorious for pushing back on abortion access, and Iowa Republicans in Congress and Iowa Gov. Kim Reynolds have joined the national call to overturn Roe. Although state lawmakers have passed some restrictions, many have been struck down.

The Iowa Supreme Court rejected a 72-hour abortion waiting period requirement in 2018 because the restrictions violated the due process and equal protection clauses of the Iowa Constitution.

In 2019, Iowa’s “fetal heartbeat” law was struck down by Polk County District Judge Micheal Huppert, citing the Supreme Court’s decision that the Iowa Constitution grants a woman the right to decide to terminate a pregnancy.

But for the past year, Iowa Republicans have been trying to change that.

In May, the Legislature passed an amendment to the Iowa Constitution stating that it doesn’t secure the right to an abortion, which will leave Iowa open to more restrictions should Roe v. Wade be weakened or overturned.

The amendment needs to pass in one more legislative session and then be voted on by Iowans in the next election before it takes effect.

Restrictions introduced across the country, and those that will inevitably be introduced in Iowa, should the constitutional amendment pass, are an attack on the ability of women, trans men, and nonbinary people to control their own bodies and reproductive decisions.

Access to abortion isn’t only a fundamental right in reproductive health care — it is also a human-rights issue.

Abortion rates don’t drop when restrictions are put in place. In fact, limitations make the procedure more dangerous. According to the Guttmacher Institute, data shows that abortion rates are nearly the same in countries where abortion isn’t legal as in those where it is.

Frankly, it’s irresponsible and immoral for lawmakers to pass these laws that could exacerbate a preventable issue.

Additionally, it’s cruel that laws laws similar to the one recently passed in Texas make no exception for cases of rape or incest. For those who don’t wish to carry out that pregnancy, it is unfair to force that upon them on top of the trauma that they have already endured.

Nearly 50 years ago, the Supreme Court ruled that the U.S. Constitution protects the right to an abortion.

Now that this notion is under attack, it is up to us and our lawmakers to fight to ensure that this ruling stays intact.