UI ‘Collaborative Performance’ expanded the creativity of students through partnership

In the University of Iowa "Collaborative Performance" course, students of art, dance, music and theater were divided to collaborate in smaller groups and create two individualized pieces to share. 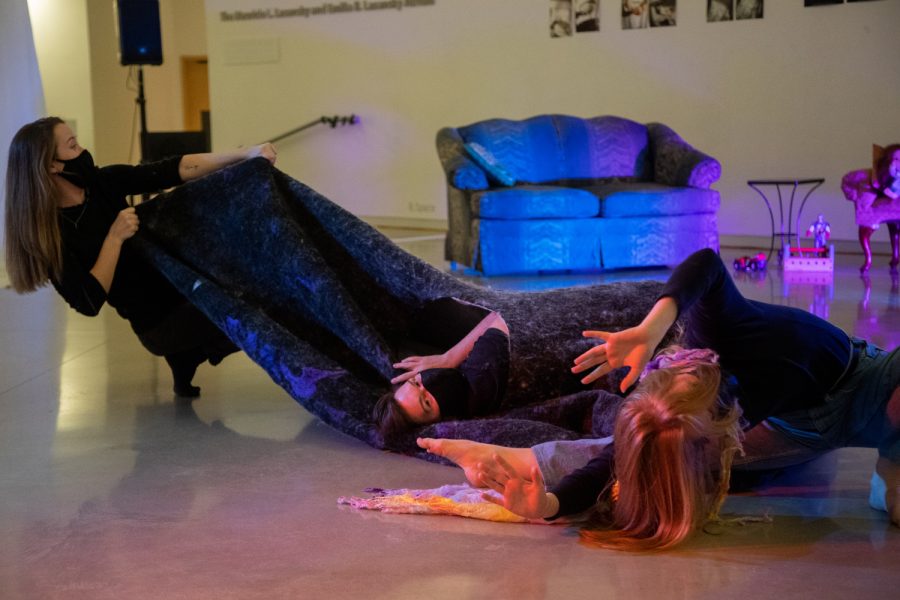 Students rehearse for the Collaborative Performance at the Visual Arts Building in Iowa City on Friday, Dec. 10, 2021.

In the world of performing arts, creativity is key. At the University of Iowa, the “Collaborative Performance” course allows upper-level performing arts students to showcase their individual style in small groups, orchestrating their own collaborative pieces. Art, dance, music, and theater assimilated to form an extended view of what performing is.

Two groups took the stage with varied purposes and executions. Tony Orrico, the course instructor, said the assignment promotes creative growth, meaning the artists are not given a set prompt to follow.

“The students were encouraged to identify in their conversations what their personal values were,” Orrico said. “They often craved or desired to find ways to expand the conditions of their work through another and to identify their personal stake in it. They’re challenging themselves and through collaboration there’s opportunity to meet a growth based on what another person can bring resource-wise and knowledge-wise.”

Contrasting the typical stage as a performance setting, the show took place in the Visual Arts Building. Several stories of open space allowed for the scattered attendees to choose their view of the pieces from the spiral ramp that enveloped the performance area.

“It’s standing room — the audience is welcome in kind of a salon style to navigate the performance and select their vantage point of how they want to view the work. With this art mindset, it’s more of an installation-based presentation,” Orrico said.

The first performance consisted of a melting pot of media to create the piece dubbed Distorted Liberation. With themes of understanding personal identity and purpose in a complex and convoluted world, UI students and performers Darrius Gray and Hallie Patterson looked internally for inspiration.

The set of the piece seemed mundane. Set up like a house, the environment portrayed normalcy, but the performers draped themselves over the scenery and the lighting formed looming shadows that shattered the peaceful setting. Synthetic sounds played, with footage projected in concurrence with the performer’s movements and costuming changes.

Spoken-word audios were also played along with the videos and the dancing on stage, overlapping several audios to contribute to the theme of distortion. The movement quality from the dancing was dynamic to mimic that idea as well, transitioning from smooth to sharp in a moment’s notice.

The second routine of the night from UI students and performers Jules Bunch, Emmalee Hallinan, and Katie Phelan took a more minimalist approach. The performers chose to work with a large felt blanket they collaborated to animate. Each taking turns, they exited the blanket and interacted with it in various ways.

With sluggish movements, graceful interactions, and sharper sequences, the three performers executed individual styles. Yet, the three were still able to collaborate and tell a cohesive story that the audience was able to interpret.

Music grew and fell, as the felt expanded, contracted, and thrashed as the piece progressed. At one point the felt was turned inside out, transforming in color from black to white, and was decorated with yellow, pink, and purple scraps of material.

Both performances had a distinct focus on collaboration, hence the title of the course. The importance of communication in collaboration was highlighted, with attention on the process rather than just the product.

“We bring a lot of attention to the space of listening and the negotiation of our assertions identifying a sense of equity, communication, and process,” Orrico said. “We emphasize not imaging or resulting what the work that we are collaborating on is going to be, but being open that the destiny is unknown and staying curious in the process.”