Edyie Stika, owner of the Knitting Shoppe in Iowa City, estimates that she has donated between 200 and 300 hats to local schools and nonprofits every year for the past 35 years. 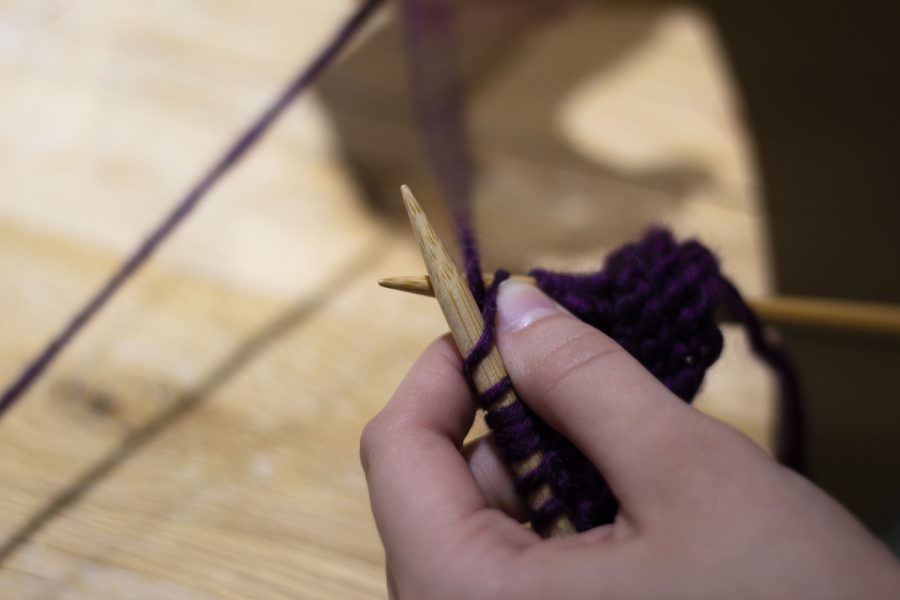 Stika has owned the Knitting Shoppe on Muscatine Avenue for 35 years. For that same amount of time, she has donated hats, mittens, and scarves to local organizations.

Stika said she was inspired to start knitting for her community in the 1980s, when she heard about the national program ‘Caps for Kids,’ and started to donate her knitted creations locally.

“I jumped on it. I mean, I love to do this,” Stika said. “There’s so much need. There’s so many places in our community right here where we can put these hats. It’s unbelievable. We could knit forever and never fill the need.”

While Stika knits most of the hats herself, volunteer knitters bring their own donations in as well.

“If they have any extra time; if they’d like to knit some caps, then I’ll take them any time of the year, and I will store them until winter and then distribute them,” Stika said. “… If they don’t know how to knit, I’ll teach them how to knit. They just need to come in.”

Stika estimates that she donates between 200 and 300 caps every year. This year, she has a surplus.

“The kids weren’t in school part of the year because of [COVID-19],” she said, “And so when they came back, I’m not sure the school really wanted us to bring anything in from the outside. So, this year, we have lots of hats.”

Shannon Hammen Miner, learning supports senior specialist at the Iowa City Community School District, was working as a student and family advocate at Alexander Elementary School when she first met Stika in 2015.

Miner wrote in an email to The Daily Iowan that going to the Knitting Shoppe to pick up a box of winter apparel is a highlight for her while working with students and families in the Iowa City School District.

“Public education is a promise and effort of the collective community,” she wrote. “Anytime individuals step up and work together as a community warms my heart and reminds me of the importance of our total efforts to make Iowa City and its surrounding area a place to grow together.”

Miner wrote that the donations benefit all students in the district, but have an even greater effect on elementary students when they go out to recess.

“When your ears are cold and you want to get outside to play in the snow with your friends, a warm hat is generally quite welcome by the kids,” she wrote.

Medea-Peters said someone who received help from the Domestic Violence Intervention Program told her they were astounded by the generosity of the community.

“They were often told that they were completely alone, and that nobody would believe them,” Medea-Peters said, “Seeing in a very real, tangible way our community supporting with kind donations like hats and gloves and coats and all the other items our community provides, gave them hope that they weren’t alone and really validated their experience.”

Medea-Peters said the Domestic Violence Intervention Program is always seeking donations and has a list of their top-needed items.

“There are two things that come out of donations like Edyie’s,” Medea-Peters said. “One is obviously the very tangible gifts that we receive. The other thing is awareness. The fact that more people are talking about the services we provide and using their voice to amplify victims’ voices is huge.”