The Hawkeyes and Cyclones will square off at Beyer Hall Pool in Ames at 6 p.m. Friday evening. 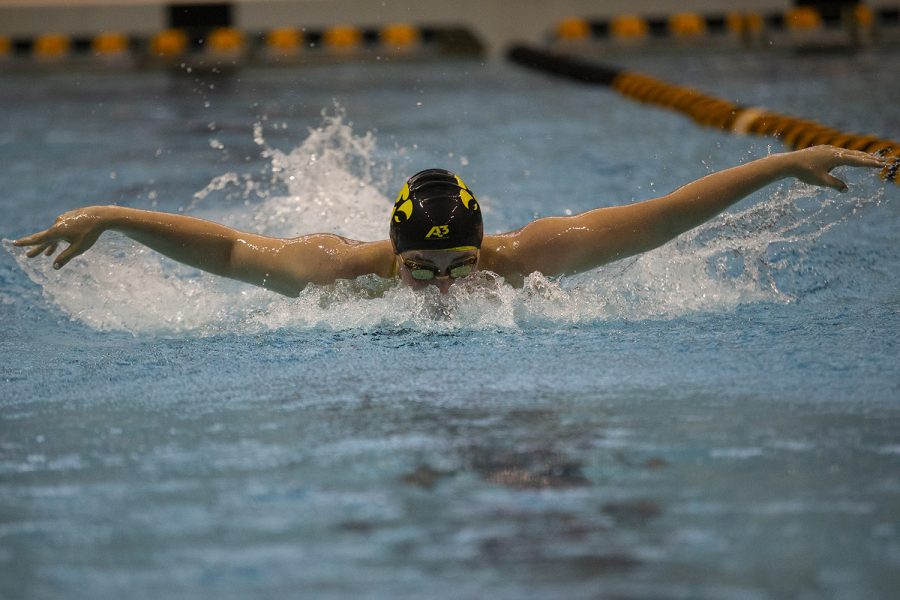 Iowa’s Georgia Clark competes in the 200 yard butterfly during a meet against the University of Northern Iowa at the Campus Recreation and Wellness Center on Friday, Oct. 1, 2021. Clark finished third with a time of 2:16.28. The Panthers defeated the Hawkeyes 159-133.

The University of Iowa women’s swim and dive team will travel to Ames, Iowa, Friday for its annual Cy-Hawk dual with Iowa State.

The Cyclones enter the meet with a 4-1 overall record. Iowa is 0-3 in the duals it has participated in this season.

Hawkeye juniors Georgia Clark and Zoe Pawloski have built quite a bit of momentum ahead of this year’s Cy-Hawk dual. At the Miami Invitational in November, Pawloski recorded a season-best time of 2:09.90 in the 200-meter backstroke. At the same meet in the prelims for the same event, Clark finished third with a 2:04.89 time.

Since then, Pawloski has practiced with specific focus on her upcoming competitions.

“We’ve really been working on sprinting and power work, like preparing to get off the blocks,” Pawloski said. “Just doing more stuff that pertains to our actual races.”

While technique is critical, Clark also stressed the importance of conditioning.

“I’ve just been working a lot on my endurance in order to finish those races because I feel like, in Miami, I could have had better endurance towards the end of my races,” Clark said. “So, just working on my underwater [stamina] and staying on top of my tempo throughout the whole race.”

Because she’s from the Hawkeye State, Pawloski understands what the Cy-Hawk rivalry means to Iowa residents and UI and ISU alumni.

“It’s very important to me because I’ve always been a part of the Iowa-Iowa State rivalry since I was even in high school,” Pawloski said. “And after all that this program’s been through, just keeping our heads high and powering through this important part of our season. Even though it might not turn out how we want it to, we will still do our best.”

After Friday’s dual, the Hawkeyes won’t compete again until Jan. 15, when they hit the road and travel to Champaign, Illinois, for a dual with the Fighting Illini.

With a long break looming before Big Ten action begins, Clark emphasized how important it’ll be for the Hawkeyes to try to maintain their momentum during the UI’s academic break that spans from Dec. 18-Jan.18.

“To end this season on a strong note, I think we just have to continue what we’re doing,” Clark said. “We’re going to be going into Big Ten [meets] knowing that we have tons of support in our conference, because another team in our conference went through the same thing. Going there, I just feel like there’s going to be a lot of girls that are going to be down to get on our side.”

The 2021 Cy-Hawk women’s swimming dual will begin at 6 p.m. Friday and be held in the Beyer Hall Pool.