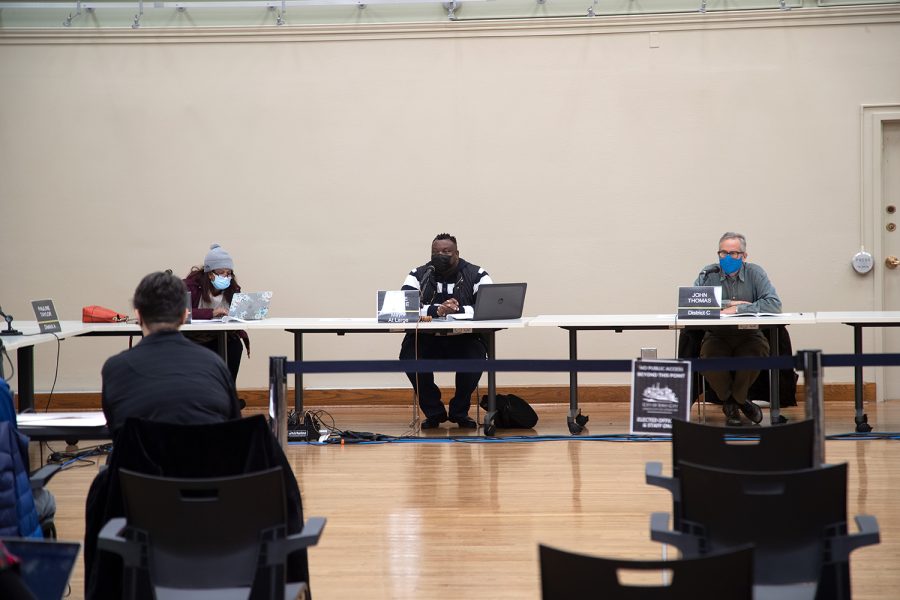 Iowa City City Council members are focusing on leaving room for population growth and keeping polling places within precincts as they start the process to approve new maps to establish new voting precincts for the city.

During a special work session on Dec. 7, Iowa City City Council members staff from the Johnson County Auditor’s office explained the three different precinct plans they created for the city.

Councilors chose to eliminate Plan B from consideration, and will move forward with considering Plans A and C. The public can weigh in on the plans at a public hearing on Dec. 14.

Each map adds three new precincts moving the total number in the city from 24 to 27.

“If we were building a precinct and it was already close to 3000 and we know that area is looking at 100 homes to put in, we are already at capacity, so we made some changes based on where we see your growth happening,” Weipert said.

Between all the three plans, he anticipates most polling places will remain the same.

Picking a new precinct map happens every 10 years after the U.S. Census is completed. This time, however, the census arrived late and the council is now on a tight deadline to pick a map by Jan. 3, 2022.

In an interview with the The Daily Iowan, Mayor Pro Tem. Mazahir Salih expressed the council will decide on a new precinct plan despite the tight window.

“We will do our best, even if there is an additional special meeting needed,” Salih said. “We will do it because the window is very narrow.”

In some areas, two precincts will share a polling location, Johnson County Deputy Auditor Mark Kistler said at the special session on Dec. 7.

“We are going to need three additional polling places and certainly we will need help finding locations,” he said.

Kistler cited North Liberty’s community center, which has the resources to hold two precincts, as a solution to the limited number of polling place options in the county.

“We have to find ADA-compliant generally public buildings,” he said. “There are a couple of precincts in all the plans where there just aren’t a lot of facilities available in that particular area, so we will probably end up with two or three precincts outside the precincts.”

This is a concern for Salih because this could cause confusion for voters.

Salih wants to eliminate confusion as much as possible, so she said she really likes that Plan A does not split up the University of Iowa east side dorms into two precincts.

Salih also liked Plan A, where the individual who created the map focused on making sure there were clear lines and less confusion, according to Kistler.

City Councilor Janice Wiener is waiting on public input to make her final decision about which plan she favors.

“I would really like to take all the information in before I come to a final decision. I am confident though that the council will choose one of the three naps and probably not go back to square one,” Wiener said.

Keeping voters in the forefront of their minds is something Mayor Bruce Teague finds to be the most important thing when considering new precincts.

“There is no indication that the council would not be able to come to a unanimous or to a majority vote on one of the three maps before us,” Teague said.

Correction: The Daily Iowan incorrectly reported that Mayor Pro Tem. Mazahir Salih said that she likes that Plan C does not split up the University of Iowa east side dorms into two precincts. Salih said that she prefers Plan A. The DI regrets this error.