Iowa City city planners are preparing to rezone the city’s south district with an emphasis on walkability and a variety of housing options. 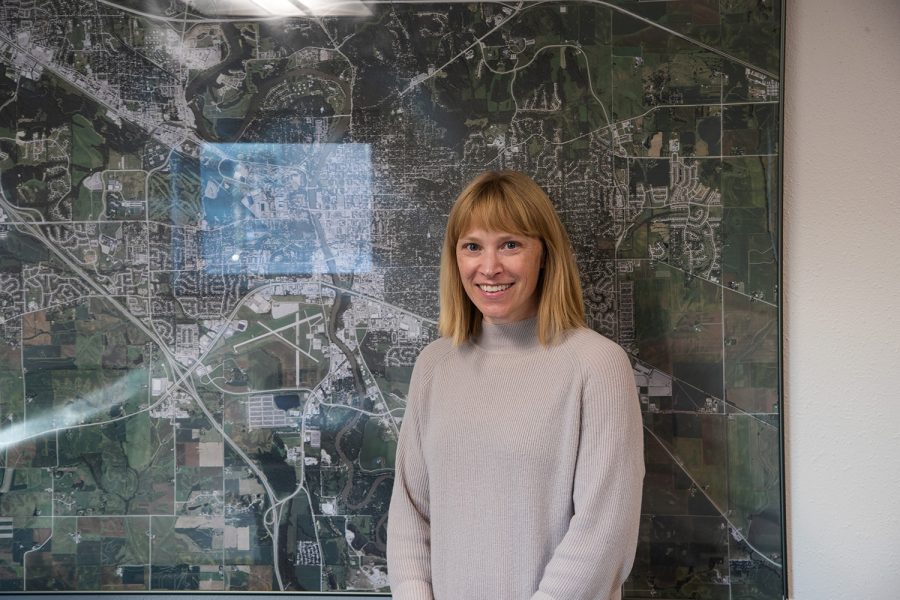 Iowa City Urban Planning’s Senior Planner Anne Russett poses for a photo at City Hall in Downtown Iowa City on Tuesday, Dec. 7, 2021. Russett is a part the team behind the development the South District in Iowa City that is focusing on affordable housing options.

Iowa City has started the process of rezoning the south district, emphasizing affordable housing and walkability.

The area will be rezoned using a form-based code, placing focus on providing a variety of housing options, all with neighborhood green spaces and commercial areas nearby, Iowa City senior planner Anne Russett said.

“This plan was developed with community centers and nodes in mind,” she said. “So, no matter where you live, you should be able to walk to a green space or to some sort of neighborhood center, whether that’s a park or a small commercial area.”

Russett said the project applies to vacant fields, some of which are not yet part of the city and are currently outside city limits. If certain fields near the south district are included in rezoning, city limits would need to be altered, she said.

The redistricting plan was recently approved by the Iowa City City Council.

For the alterations and expansions to happen, property owners will have to first “come forward with an application or an interest to bring their land into the city,” she said.

The district is far from the University of Iowa campus, Russet said, but the rezoning does have the opportunity to provide students with more housing options.

Among the additional housing options that will be provided, Russett said the area will contain anything from single family homes to large apartment buildings, including “house scale apartments, townhomes, duplexes, fourplexes, [and] cottage courts.” All will be near each other.

Tony Perez, senior associate at Opticos Design, the company consulting with the Iowa City Planning and Zoning Commission on the rezoning, said the housing types focused on in this project fall under the “missing middle” category.

The term “missing middle” stems from the focus on building single family homes and large-scale apartment buildings after World War II, Perez said. Because of this, he said there were fewer affordable housing options for families in safe, walkable areas nationally.

“[This development method] opens opportunities for people who want to live in a neighborhood that has mixed housing choices in it, and it might offer them the ability to live in an area that they otherwise might not be able to afford,” Perez said.

In her time living in Minneapolis where there were several house scale apartment buildings near where she lived, Patrick-Ferree said the proximity of different housing types allowed renters to buy houses near their previous residence.

On top of city council amending the plan to create these form-based land use categories, with plans to create form-based standards for the zones, Iowa City has created the 2022 Form-Based Code Grant Standard Program.

While the City Council has amended the rezoning plan to create these form-based land use categories, along with the plans to create form-based standards for the zones, none of the land has been rezoned yet.

Russett said the next step of the process falls on property owners “to go through the rezoning process to apply different form-based zones to the land.

The wheels have been put in motion and Russett said the process of rezoning the 900 acres is still in its early stages.

“This is a very slow process,” she said. “This is just the first step of getting the regulations in place to hopefully get the type of development that we’d like to see. But it’s going to be many, many years before we see this area built out.”