Bartertown Toys and Collectibles, a pop-up store that will be open through December, opened this week in the Old Capitol Mall. The store will also offer products from local Iowa City businesses Ansel’s Awesome Sauce and Sweets and Treats. 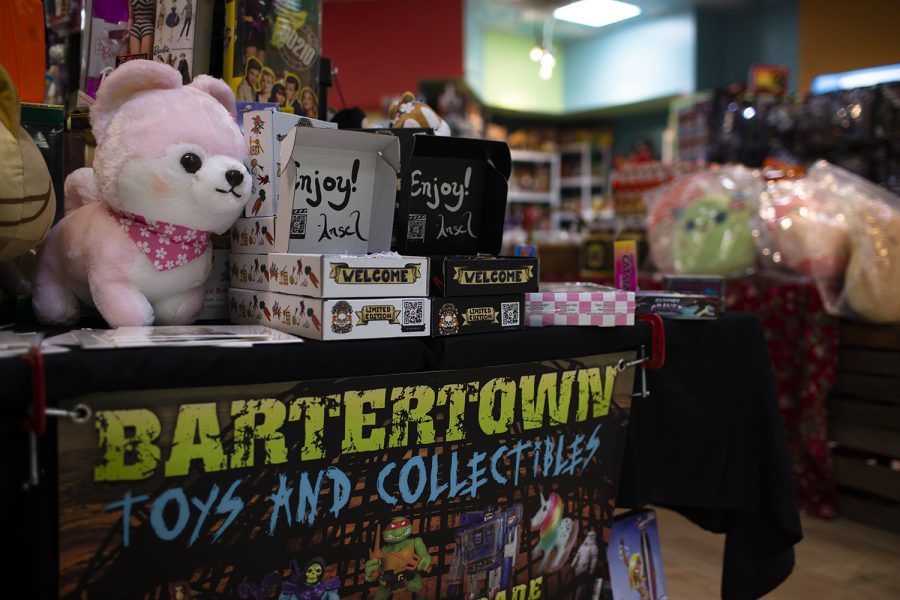 For the month of December, a corner of the Old Capitol Mall will be home to a nostalgia-filled vintage shop.

Bartertown Toys and Collectibles, a new pop-up store that sells toys, collectibles, and comic books, opened this week. Action figures and toys from Star Wars and Masters of the Universe line the shelves. Old Sega and Nintendo games and comic books from the ‘80s and ‘90s are stacked in tidy boxes.

Jeremy Ziegenhorn, owner of Bartertown, said the idea for the pop-up store came from a conversation between him and Monique Holtkamp, the owner of Sweets and Treats, another store in the Old Capitol Mall that sells gourmet candy.

“We were just talking about how cool it would be to have a toy slash candy store, kind of joking, and then it’s kind of evolved from there,” Ziegenhorn said.

Ziegenhorn said he’s opened a pop-up store in one of the heated pods in the Iowa City Pedestrian Mall and at Midwest comic conventions.

“People come in and look around and are just blown away, and they always say, ‘Oh, man, I had that when I was a kid,’ and it’s just kind of cool,” Ziegenhorn said.

Other toys that can be found at the store include G.I. Joe, Ninja Turtles, Barbie, and My Little Pony.

Along with its own products, Bartertown sells products from Sweets and Treats. The store opened officially on Dec. 5 in a vacant space within the mall that was previously Silver Spider.

Ziegenhorn said while the store will primarily have vintage toys for sale, he will also have newer items for customers to buy.

He said customers will also have the option to bring in items of their own to barter.

“It’s kind of fun because I’m also a collector,” Ziegenhorn said.  “And so now, I get stuff to add to my collection, buying toys from other people, and it passes the circle of toy trading.”

Holtkamp said the collaboration allows people to go back to a nostalgic time in their lives.

“It makes you think of your childhood,” she said, “Toys and candy do that. They bring you back to a precious moment of something that you loved and you haven’t seen in a long time … It’s joyful.”

Holtkamp said she’s optimistic about sales during the holiday season and sees many mutual benefits from the collaboration.

“The supply chain has been such a wreck this year,” she said. “I’ve had a hard time getting things in, like I’ll order stuff and maybe get like 50 percent of what I order. But I ended up with a ton of stuff for the holidays, candy-wise. And so it’s nice to have that space to overflow into for the candy shop.”

Holtkamp added that the toy store can revitalize a less active part of the Old Capitol Mall, which once contained over 50 different stores and is now down to just over 30.

“For a while, it’s been empty, and I just wanted to do something nice for the holidays,” Holtkamp said. “I try to be in the community and I try to work with others around me. The idea kind of came out of that.”

Ansel Cummings, owner of Ansel’s Awesome Sauce, said he is partnering with Ziegenhorn at Bartertown to sell his hot sauce. Cummings’s locally made sauce, which he says is made up of only ingredients within a 50-mile radius of Iowa City and Missouri Peaches, is now sold at Bartertown Toys and Collectibles.

Cummings said the collaboration between local businesses in Old Capital Mall can offer something unique that can be increasingly difficult to find in Iowa City, partially due to the increase in the price of rent in the downtown area. He said the store is reminiscent of the way downtown Iowa City used to be, harboring a variety of unique, locally owned stores.

“I think that offers a different taste of Iowa City to people that has not been as present as it once was,” Cummings said.