Iowa men’s basketball looking to bounce back against Illinois

The 7-1 Hawkeyes will play the 6-2 Fighting Illini on Monday night at Carver-Hawkeye Arena. 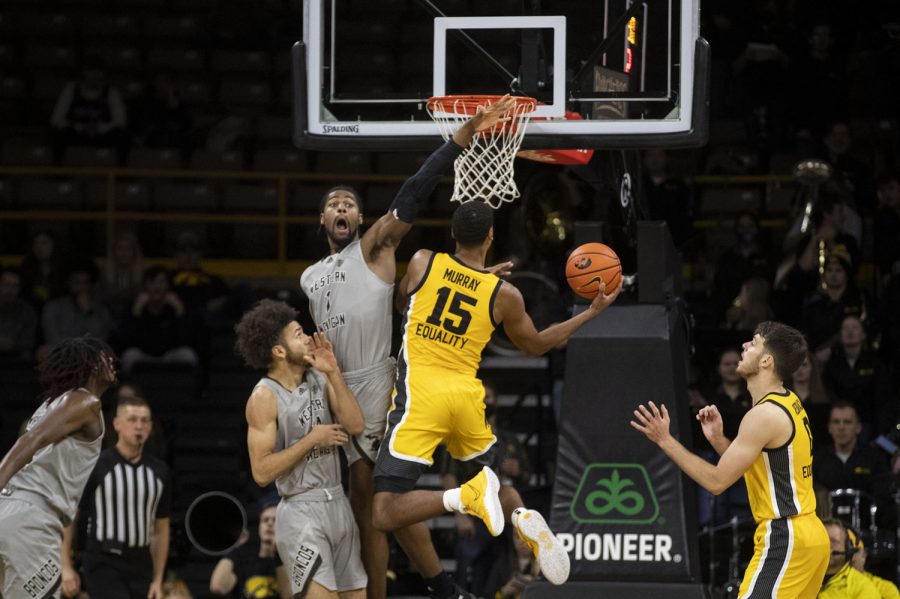 Iowa forward Keegan Murray shoots a layup during a men’s basketball game between Iowa and Western Michigan at Carver-Hawkeye Arena in Iowa City on Monday Nov. 22, 2021. Murray scored a career-high 29 points. The Hawkeyes defeat the Broncos 109-61.

Iowa and Illinois men’s basketball matchups have recently turned into a heated rivalry between the two teams.

When the two sides met in Iowa City in the 2019-20 season, Iowa defeated Illinois, 72-65. During the postgame handshake, head coach Fran McCaffery and several Illinois assistant coaches got into a heated exchange. Eventually, McCaffery called off the postgame handshake between players, and the Hawkeye men’s basketball team retreated to the locker room.

Since then, the Hawkeyes and Fighting Illini have traded blows.

Illinois got the better of Iowa in their most recent meeting in the 2021 Big Ten Tournament semifinals, 82-71, to go to the conference title game.

The rivalry returns to Iowa City on Monday, with fans back in arenas for the first time in a year and a half.

The first edition of the 2021-22 matchup features a mix of old and new faces. In 2020-21, the contest between the Hawkeyes and the Fighting Illini revolved around Illinois center Kofi Cockburn and former Iowa center Luka Garza.

With Garza now playing professional basketball and Cockburn back for another year in Illinois, the Hawkeyes have a hole to fill to protect the rim.

Starting center Filip Rebraca got into foul trouble in the Hawkeyes’ last game against Purdue, so Iowa turned to sophomore center Josh Ogundele.

Ogundele got experience against one of the nation’s best centers in Purdue’s Trevion Williams, something that should help him out against Cockburn.

Ogundele logged 16 minutes and finished with a season-high seven points and five rebounds against Purdue.

“He’s going to be important, and it was great for him to play significant minutes and play well and gain confidence,” McCaffery said in a Zoom meeting with reporters Sunday. “It was good for him and we want him to work and do the things he does well without doing too much.”

Sophomore forward Keegan Murray also may make a return to the court in the Hawkeyes’ game against the Fighting Illini.

Murray was instrumental in Iowa’s first seven games of the season, averaging 24.6 points and 8.8 rebounds per game. The sophomore forward is day-to-day and will be a game-time decision.

“He’s a little better than he was, and we will see what he can do today,” McCaffery said Sunday.

Illinois is currently 6-2 on the season. The Fighting Illini dropped a pair of games to Marquette and Cincinnati earlier this season. But Illinois is coming off a 86-51 victory over Rutgers.

The Illini lost veteran point guard Ayo Dosunmu after the 2020-21 season. Dosunmu was picked by the Bulls in the 2021 NBA Draft.

“They’ve got a lot of weapons and it’s a new era,” McCaffery said. “They lost some people but they added some experienced people, and Kofi is back and playing some of the best basketball of his life.”

Iowa tips off against Illinois at 6 p.m. at Carver-Hawkeye Arena. The game can be watched on FS1.