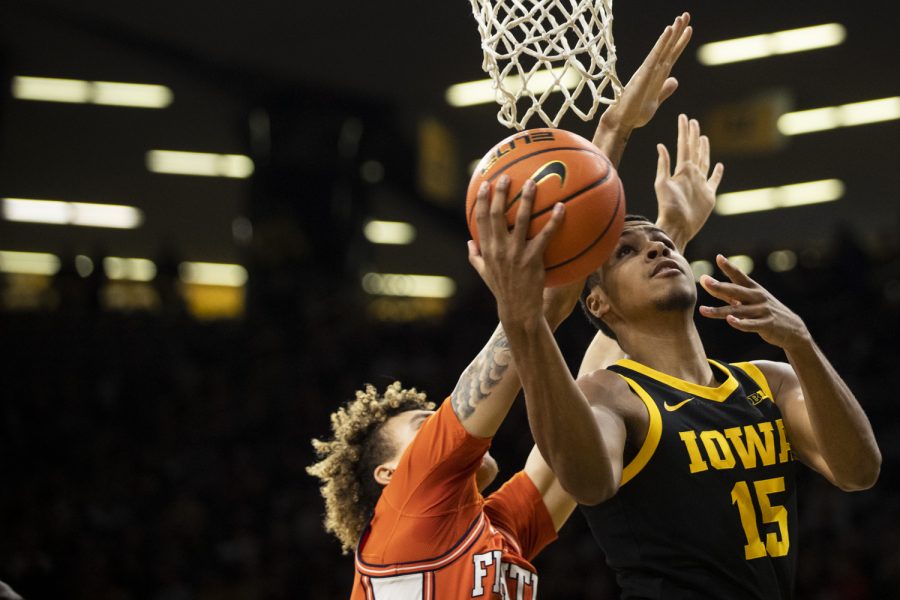 Iowa forward Keegan Murray shoots a layup during a men’s basketball game between Iowa and Illinois at Carver-Hawkeye Arena in Iowa City on Monday, Dec. 6, 2021.

“Just getting my feet under me with an ankle injury is tough,” Murray said of his performance. “[I was] just trying to get my feel for the game back. In the second half, I kind of got that back. I got my mojo going. I got into a little bit of a flow.”

Murray missed the Hawkeyes’ Dec. 3 game against the Purdue Boilermakers with an ankle injury. Iowa lost that contest, 77-70.

“Obviously, I did it against Virginia,” Murray said of his injury. “I was able to finish that game, but the next day it just kinda got a little worse. Then, I missed the game on Friday . . .  I felt good in the second half [Monday] and also a little bit in the first half. So, I’m moving in the right direction.”

Iowa is now 7-2 overall this season. All seven of the Hawkeyes’ wins have come against nonconference opponents.

“I think there were some good things, but you can’t be satisfied with two losses,” Iowa head coach Fran McCaffery said postgame. “There were some individuals that played well, and there were some times that we played well together. The press was good, activity was really good, at times. The bottom line is, we have to get better with our execution and limiting the opponent to fewer shots.”

Iowa struggled to pull the ball off the glass against Illinois. On the night, the Hawkeyes were outrebounded, 52-23.

The Fighting Illini had a size advantage in the post for the majority of Monday’s game. Transfer forward Filip Rebraca, who is 6-foot-9 and 230 pounds, occupied the post for the Hawkeyes for most of the contest. Rebraca was trying to rebound against Cockburn, who is a 7-foot, 285-pound center. Cockburn grabbed 18 rebounds — 10 more boards than Rebraca did.

“This rebounding line is completely unacceptable,” McCaffery said. “I mean, I’ve been coaching 40 years, and I’ve never seen anything like it. It’s just absolutely unacceptable. We just have to be better.”

Postgame, McCaffery said he should’ve considered giving Ogundele more minutes. He added that the British big man was fairly active when he was on the floor.

Murray, and his twin brother Kris, also helped defend and box out Cockburn. The Murray brothers are both 6-foot-8.

Iowa threw double teams at Cockburn with the Murray twins, Rebraca, and senior forward Connor McCaffery in the low post. In the high post, guards Joe Toussaint and Tony Perkins contributed to the Hawkeyes’ defensive effort against Cockburn.

Iowa pressed Illinois for the majority of Monday’s game. The Hawkeyes sometimes put just one player in the backcourt to defend the Illini’s inbound passes.

Throughout the game, Iowa also applied full and 3/4-court pressure against Illinois.

The press gave the Hawkeyes an advantage in the turnover column, as the Illini turned the ball over 18 times. Iowa only registered four giveaways on the evening.

“Well, we prepared in practice, but I felt like they did a really good job on their rotations,” Plummer said. “They got length, so it was like long guys rotating. So, it was kinda hard passing the ball across the court.”

Iowa will hit the road Thursday for its next contest. The Hawkeyes will take on the Iowa State Cyclones at Hilton Coliseum in Ames at 8 p.m.

The contest will begin a stretch of four consecutive nonconference games for Iowa. The Hawkeyes will also match up with Utah State, Southeastern Louisiana, and Western Illinois from Dec. 18-29.