The junior center scored 14 of his 17 points in the second half at Carver-Hawkeye Arena Monday. 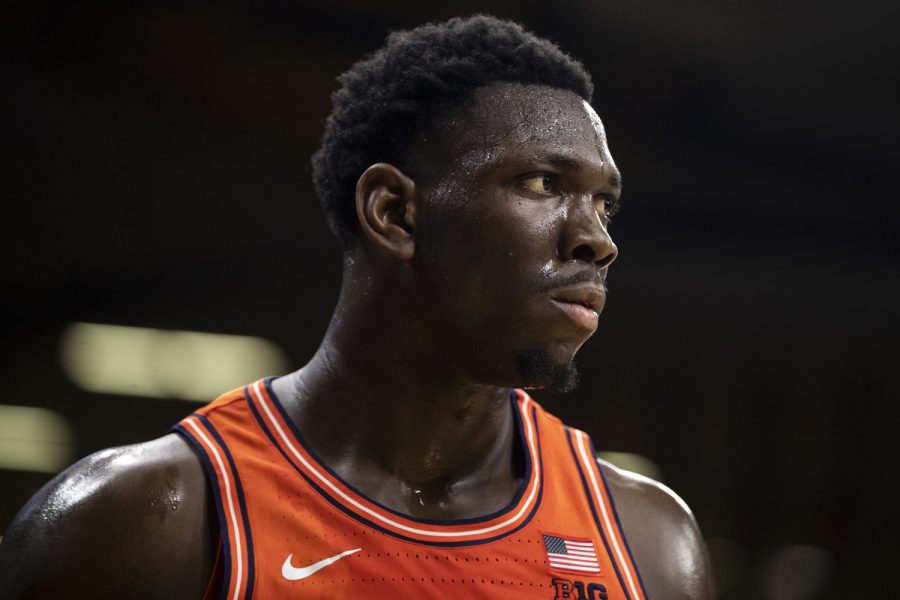 Illinois center Kofi Cockburn stands on the court during a men’s basketball game between Iowa and Illinois at Carver-Hawkeye Arena in Iowa City on Monday, Dec. 6, 2021. Cockburn finished with 17 points and 18 rebounds. The Fighting Illini defeated the Hawkeyes, 87-83.

Illinois men’s basketball center Kofi Cockburn had just one field goal attempt in the first half against Iowa Monday night at Carver-Hawkeye Arena.

But the preseason All-Big Ten honoree turned it on in the second half to finish with 17 points and 18 rebounds as the Illini picked up an 87-83 victory.

“We didn’t do a very good job in the first half getting the ball to Kofi, [the Hawkeyes] deserve a lot of that credit,” Illinois head coach Brad Underwood said postgame. “But, you know, we made a few adjustments in the  second half. Our spacing was much better, and our emphasis was on getting the ball to him. We can’t have halves where he has one field goal attempt.”

Cockburn hit five of his 11 shots in the second half. He also went 4-of-4 from the charity stripe.

“We just simply tried to isolate him [in the second half],” Underwood said of Cockburn. “We ran four or five sets a lot in the second half. We didn’t get very complicated. We got out of our constant ball-screen motion, and it became a lot more set-oriented.”

Cockburn said he made it a point to be more aggressive in the second half. He even told his teammates to look his way more often.

“My statement at halftime was, ‘Look on the inside and try to get it to me, but if they’re already double-teaming, if they’re already triple-teaming me, don’t try to force it,’” Cockburn said. “[I was trying to] just let the game come to me. [I told my teammates], ‘If they’re going to play behind me, then you can pass it to me. If not, just make the right skip [pass], make the right read. I’ll get mine.’”

The stat-stuffing performance marks Cockburn’s second consecutive double-double, and his fourth in the six games he has played in this season. Cockburn has yet to be held under ten points in any game this season.

The Jamaican big man was suspended for Illinois’ first two contests this year. Though, he’s still averaged 24 points and 10.6 rebounds per game this season.

Cockburn, now a junior, hasn’t played in Iowa City since he was a freshman. The last time he played on Mediacom Court at Carver-Hawkeye Arena, Cockburn struggled. The 7-foot, 285-pounder shot 2-of-6 from the field, dropping six points. He only pulled down six rebounds against Iowa in 2019 too.

“We don’t have enough time [to talk about] all the growth,” Underwood said. “Tremendous, but the biggest one is mental. You know, he’s understanding, like, at halftime [today], he would have, as a freshman, been frustrated, ticked off, upset that he wasn’t getting touches. It would have affected every other part of his game. Now at halftime, he’s saying, ‘Hey, if I’m open, you can give me the ball, but don’t force it.’”