Ask the Author — Writers of ‘We the Interwoven: An Anthology of Bicultural Iowa’

We the Interwoven: An Anthology of Bicultural Iowa is a three volume book series, each with a collection of stories by multiple writers describing their experience with immigration. 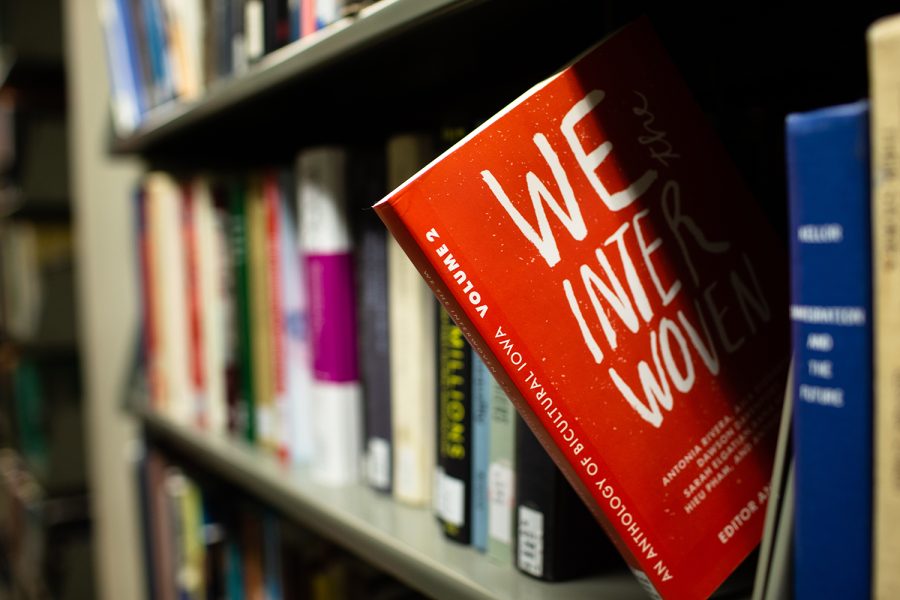 The book "We the Interwoven" is seen at the University of Iowa Main Library on Sunday, Nov. 28, 2021.

Sarah Elgatian, Eyad Said, and Shalini Jasti are writers for the book series We the Interwoven: An Anthology of Bicultural Iowa, a series from emerging authors who have witnessed or gone through immigration firsthand. The writers were chosen by the Iowa Writers’ House and are members of the Bicultural Iowa Writers Fellowship. Andrea Wilson, founder and executive director of the Iowa Writers’ House and the We the Interwoven series, said her goal is for the three-part series to be accessible to all Iowans, to allow them to see through a window into different experiences. In an interview with The Daily Iowan Elgatian, Said, and Jasti, shared their meaningful stories on immigration, their involvement with the Bicultural Iowa Writers Fellowship, and the difficulties they faced while writing. We the Interwoven: An Anthology of Bicultural Iowa Vol. 3 came out in September.

Sarah Elgatian – We the Interwoven Vol. 2

Sarah Elgatian is the Marketing and Program Coordinator at the Midwest Writing Center. She has always wanted to be a writer in some way, but it wasn’t until joining the Bicultural Iowa Writers Fellowship that she felt like one. In volume two of the series, Elgatian opens about her Armenian Grandmother who immigrated to the U.S. and how she saw her as the symbol of how to be Armenian. She examines what it means to be an Armenian who doesn’t speak the language or has never been to Armenia.

DI: What was the writing process like for your piece?

Elgatian: There were about 45 drafts of this thing. It started with me in tears on an airplane and that must have had about six false starts just in that two-hour flight. I tried to write it as a letter to my grandmother, then I tried to write it as an essay, and then I tried to journal about it. It was very much like having something stuck in your throat. There’s something in the vulnerability of dealing with your own identity that makes it feel more raw, where you may be talking about trauma, but you’re really talking about your own identity. It was just a whole process with a capital “P.”

DI: When you were writing your piece, was there any part that stuck out to you that was particularly hard to write?

Elgatian: The thing I find myself saying the most is that I wrote in this piece that my whiteness — my passing — is among the greatest gifts that have been given to me, which I say sort of derisively. Because it’s not — that’s not right, that shouldn’t be a gift. I have always assumed the identity that people put on me, and folks tend to assume I am whatever they are.

Elgatian: There’s a couple of things that have been really special to experience after the story got into the world. The children of immigrants of all stripes have told me that it resonates, which is really, really special. I was 29 when the book came out and had spent that long time feeling very alone, even though I have siblings and cousins who are clearly going through at least similar things. So that’s one thing, you are not alone. Something else that’s important to me is that my people and my grandparents who came before me are seen, especially given how much they have given and lost.

Eyad Said – We the Interwoven Vol. 3

Eyad Said is an Assistant Professor of Mathematics at Mount Mercy University. He called himself a “mathematician by trade” because he had never practiced anything close to writing – other than scientific papers. In volume three of the series, Said’s story is a timeline on how he grew up in Syria, witnessing the country’s safety decline, and deciding to immigrate to the U.S. with his wife and daughter. Said writes about being desperate for a solution from fear and his family’s continuous pursuit of happiness.

DI: How did you become involved with the Bicultural Iowa Writers Fellowship?

Said: Another Mount Mercy Professor, Anthony Mielke, a personal friend of mine wrote his story in the second volume. He invited me to a reading of it, and I didn’t know what to expect. In my mind, I was going to listen to something about family and marriage therapy because he is a family and marriage therapist. That turns out to be not accurate at all. I was blown away by the stories that I heard, they hit really close to home. One thing led to another, and with the encouragement of Anthony and Andrea [Wilson], I joined the program.

DI: Was there a part in your story that felt like it was either particularly hard or easy to write?

Said: Oh, nothing was easy. Not just because of the trade, I learned so much, but I still have a lot of things to learn. What stuck with me as being particularly hard was going back to the memories. I think I didn’t want to remember, I always felt there was this mental block that I cannot go or move over. Once I did remember them and let them out, I will say it changed me in ways.

Said: This was a topic I battled with a lot at the beginning. I wanted to write more about Syria and not more about the struggles of Syrians trying to be politically involved and trying to do more good. I think between that time, late in 2019 and today, I have evolved into another type of character. I accept that none of us can fight for all the good reasons all the time. I cannot ask everyone around me to be fighters for justice, race, economy, women’s rights, and immigrants’ rights. I’m happy to put the story out there for someone to read more about Syrians and what they have to go through inside and out.

Shalini Jasti – We the Interwoven Vol. 3

Shalini Jasti is a first-year eighth grade English teacher in New Jersey. Jasti said she had always wanted to be an English teacher rather than an author. Her story in volume three describes her relationship with English and the way it was hard for her parents to see because they are both immigrants from India. Jasti said neither of them had a strong grasp on English, but they have a tie to math and science – a lot of logic-based thinking made it hard for her to share that interest.

DI: How did you become involved with the Bicultural Iowa Writers Fellowship?

Jasti: I think I saw a flyer on the fourth floor of the English Philosophy Building. I was a third-year student at the time. I was just looking for an opportunity where my writing wasn’t automatically “othered” because I’m one of the only people of color in almost all my classes. When I was in school all my writing was centered around my identity as a different person and I just wanted a place where my writing could go. There, that wasn’t the case.

DI: Have you always felt like you wanted to tell your story and become a writer?

Jasti: I always knew I wanted to be an English teacher, but I had a lot of pressure from my family to be a doctor. So, I went to college and my first year I was a biology major, then I switched to education because I knew that’s what I wanted to do. My goals to begin with were that I wanted to be a person that could allow my students to tell their story. The more I’m teaching, the more I’m realizing that I have to learn how to do that myself before I can expect my students to do it.

Jasti: I don’t want my story to portray one image of anyone. I think one of the things I’m trying to avoid portraying in my story is the monolithic narrative that since I published this story, this is the narrative of all South Asian American women. I think a lot of stories of people who are bicultural or immigrants are about the sense of confusion about identity.