Opinion | How should we address sexual violence handling on campuses?

Sexual violence has been an issue on college campuses for years, and the responsibility to address it falls to people on multiple levels. 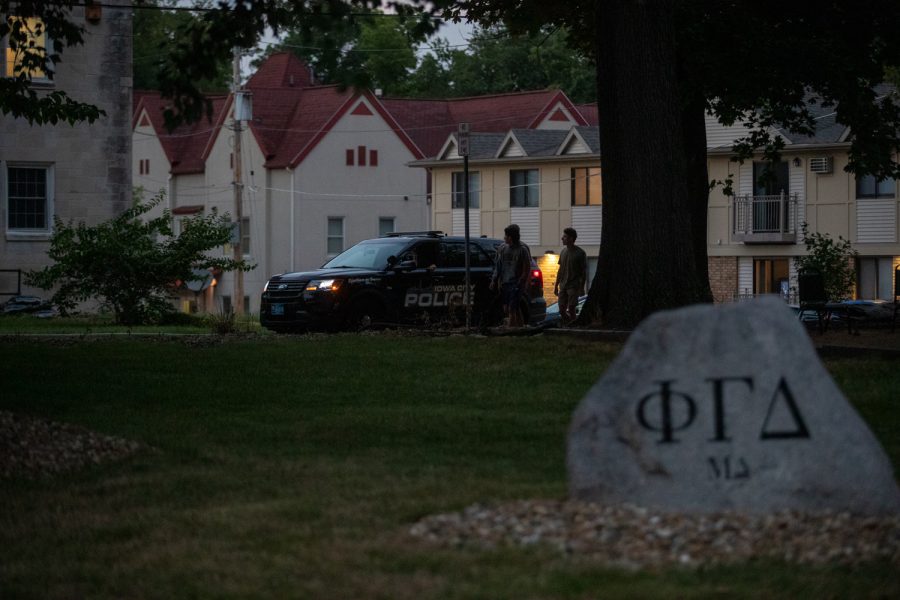 A police car sits in front of the Phi Gamma Delta fraternity house during a protest following sexual assault allegations against the University of Iowa’s chapter of Phi Gamma Delta on Tuesday, Aug. 31, 2021.

Sexual violence has always been an issue on college campuses, but the way universities have handled cases has sounded alarm bells for some time.

This year, students across the country began a reckoning over sexual assault on campuses.

Stories from a recent project I wrote — about UI students facing challenges when reporting their cases of sexual misconduct and violence — aren’t exposing a new problem. Rather, they are shedding light on an issue that has plagued college campuses across the country for years.

At the University of Iowa, thousands of students participated in three nights of protests after allegations against two members of the Phi Gamma Delta Fraternity, also known as FIJI, surfaced in the campus community.

These protests were part of a national movement. The FIJI allegations were made just days after the University of Nebraska-Lincoln’s FIJI Chapter made national news for similar accusations. UNL students also protested as a result, and stood in solidarity with survivors.

Over the years, what has felt like failures by a broken process for many students has gone so far as to cost them their lives.

One notable example of this was in 2010 at St. Mary’s College, where Lizzy Seeberg committed suicide just 10 days after she reported to university police that she had been inappropriately touched by a Notre Dame Football Player.

Though one may have thought this could be the breaking point during the rise of the #MeToo movement, controversial decisions have still been made since. The most recent was in 2020 when the Trump Administration released new rule changes that included a narrower definition of sexual harassment and required cross-examination at hearings.

To be clear, I don’t have an answer on what needs to change or how we’re supposed to solve this problem. The reality is that there is no clear-cut solution, and there are many layers that need to be pulled apart.

However, what I do know is that I’m asking alongside my friends, is there a system in place that’s going to protect and help us?

The even more important question to ask is: are colleges and universities potentially upholding a culture where sexual assault is allowed to happen because we don’t have a system that holds people accountable for their actions?

If leaders examine the current systems in place and ask themselves what needs to change, they may save us, and future generations, from potential trauma.

The responsibility to initiate change falls to people on multiple levels.

For one, falls to the federal government. Title IX is a federal civil rights law that applies to any higher-education institution receiving federal funding. Colleges and universities have their hands tied when it comes to policy such as what constitutes sexual assault and harassment and setting the evidentiary standard.

While President Joe Biden strongly denounced the Trump Administration’s rule changes in 2020, the Department of Education isn’t planning to undo regulation until May 2022. If it follows a similar timeline to the predecessor’s, this means we wouldn’t see a final rule until February 2024.

Not only should this be on the forefront of the Biden Administration’s agenda, but our government needs to ask questions based on student concerns. Do we have a system that is impossible to use, and is current policy acting as a barrier for survivors to come forward?

The responsibility also falls on colleges and universities.

In a four-year comparison report from the UI Title IX and Gender Equity Unit (formerly known as the Office of Sexual Misconduct and Resource Center), there was an increase in sexual harassment reports from 2016-19. For sexual assault, the number of reports increased from 2016-18.

This year, the UI released a new anti-violence plan that recommends changes in prevention and education, intervention, and policy.

While this is an important step and on-campus resources are available, the way our campus addresses sexual violence and invests in these resources is also crucial. Should more funding be given to programs like the Rape Victim Advocacy Program and Women’s Resource and Action Center? Did the campus administration respond to this year’s protests in the best way possible?

Of survivors who report an assault, 40 percent will be pushed out of their learning institution, and those who don’t report suffer in silence. As someone who has felt firsthand the effects of sexual violence, the weight of the impact isn’t a burden I would wish on anybody.

The question moving forward is, will institutions listen and see if the system in place works, or will everything remain according to the status quo?