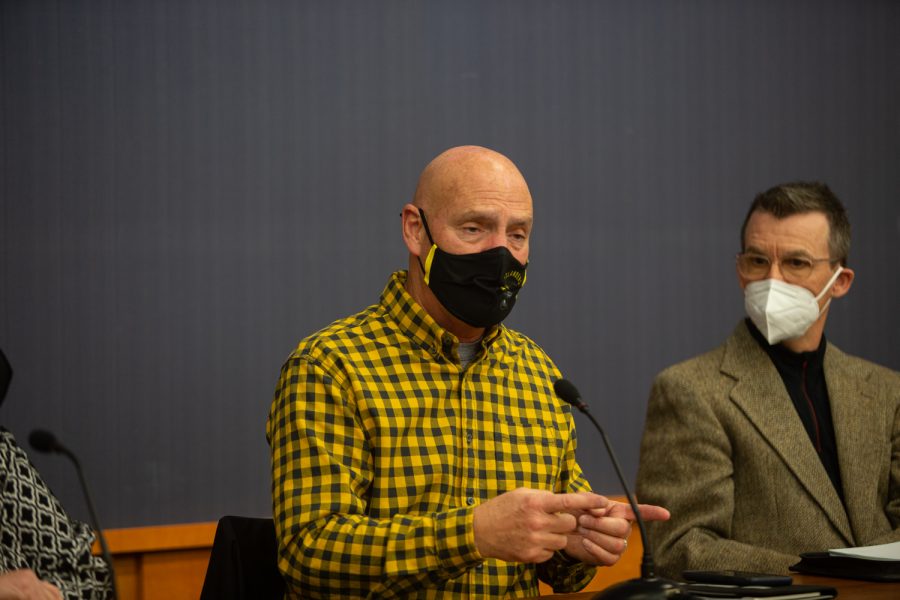 State Representative Dave Jacoby (D- Coralville) answered questions at a Johnson County Legislative Forum held by The Daily Iowan at the Iowa City Public Library on Wednesday, Nov. 24, 2021. Questions were asked by The Daily Iowan staff and the general public, ranging from issues of public education funding and curriculum to state and federal COVID-19 response.

They critiqued House Bill 802, which bans divisive concepts from diversity, equity, and inclusion training as well as a bill proposed in the last legislative session that would restrict what teachers can teach from a history curriculum based on the 1619 Project. The bill did pass.

Additionally, Sen. Jake Chapman, R-Adel, said at a school board meeting in Johnston, Iowa on Nov. 11 that teachers should be criminally prosecuted for distributing material he deemed obscene. He shared on social media plans to propose legislation making distributing this content a felony offense.

“I think that the news reports of Senator Chapman’s proposal, making it a felony for teachers to distribute certain books, is awful. I mean, we need to support teachers,” Rep. Christina Bohannan, D-Iowa City, said.

“[Sen. Chapman’s comment] does create enormous problems for educators, because now they are put into a position where they’re being scrutinized by the public in ways they have never been scrutinized before,” Mascher said.

Mascher taught in the Iowa City Community School District for 33 years and said, in her time as an educator, they were critiqued so heavily. Jacoby said legislation targeting educators paints a negative picture of Iowa.

“I am worried about the teacher shortage and the fact that people all are deciding not to go into education,” Mascher said. “And many of the students that are being educated here in Iowa are leaving the state because of comments like Senator Chapman’s, and that’s very bothersome to me as well because we need those people.”

The Democratic lawmakers also said they anticipated an increase in funding to Iowa’s public universities in the upcoming legislative session. Last year the Legislature didn’t increase funding for the state Board of Regents, following a cut of $8 million the previous year.

“I’m optimistic because it’s an election year. And I think there’ll be some bipartisan work to reinstate the $7 or $8 [million],” Jacoby said.

Jacoby said that this year public universities have received more funding on the federal level, but not on the state level.

According to Bolkcom, Republicans’ differing priorities and their decision to limit public education funding are putting students in a position to pay the price for this decision.

“The Republican priorities are different; their economic policies and tax policies are different than ours,” Bolkcom said. “They’re more than happy cutting taxes for millionaires in Des Moines than they are making sure students and their families can afford to come to these institutions.”

The increase of tuition on the public higher education level is a concern for the legislators because students end up paying more for tuition as a result.

Mascher highlighted the state’s budget has a surplus of a billion dollars and suggested some should be devoted to public education.

“We have dollars and we have money available to invest in priorities that we believe in,” Mascher said. “[Republicans] have a different set of priorities. Let’s just be honest about that.”

Bohannan said as a first-generation college student she understands the importance of public education. In addition to being a legislator, Bohannan is a law professor at the University of Iowa. The upcoming legislative session will be her last before the 2022 election, where she is running to represent Iowa’s 1st Congressional District in the U.S. Congress against incumbent Rep. Mariannette Miller-Meeks, R-Iowa.

The upcoming session will also be the last for Mascher and Bolkcom, who both announced plans to retire.

The legislators are looking forward to continuing to advocate the importance of public education, they said.

“I really want to see us get back to our proud tradition of supporting public education in the state at every level, whether that’s for preschool, K-12, or universities,” Bohannan said.