The University of Iowa Symphony Orchestra reflects on its past, present, and future with an all-new holiday concert. 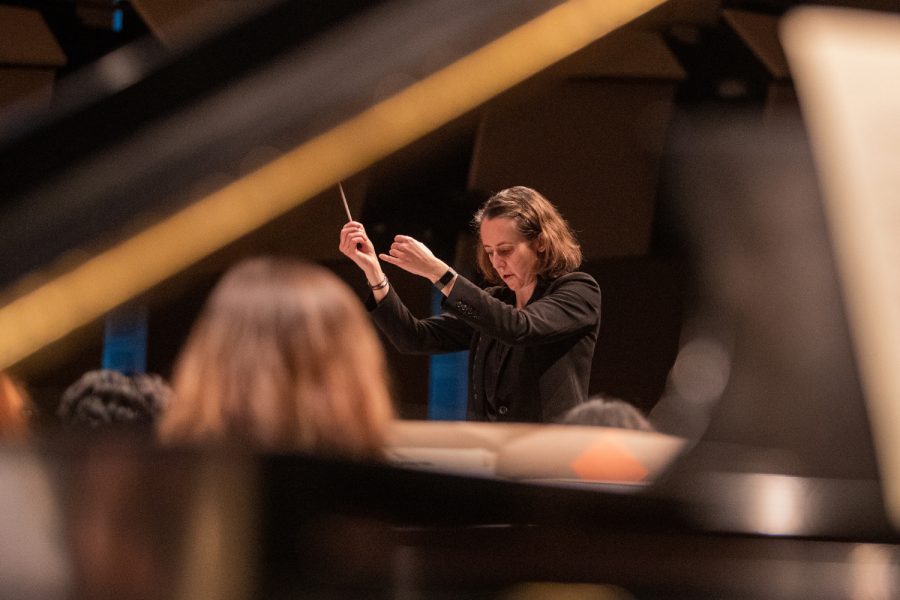 Melisse Brunet is shown conducting a rehearsal in the Concert Hall of the Voxman Music Building in Iowa City on Friday, Nov. 19, 2021. As her first semester at the University of Iowa, the centennial anniversary of the Iowa Symphony Orchestra is a huge responsibility to uphold, but by "being patient with myself, being patient with my students, being patient with my colleagues and taking it easy" is how she dismisses the burden.

The University of Iowa Symphony Orchestra has been around nearly as long as the School of Music itself. The ensemble has come a long way since its humble beginnings in the 1920s. One hundred years later, the orchestra is celebrating a century of impact on the collegiate music field and beyond.

On Dec. 1, the orchestra will continue the commemoration of its centennial anniversary with an all-new concert at Hancher Auditorium, titled “Holiday Pops.” The concert will feature festive holiday tunes and vocal pieces, as well as a collaboration with the Preucil School of Music. Both the holiday classics and new works will be performed under the direction of conductor Mélisse Brunet, who said she was excited to bring a joyful concert to the UI.

“That’s going to be a very, very friendly concert for the entire community. We’ll see all the tunes that everybody loves to listen to during this season,” Brunet said. “We’ll play a lot of jazz rhythms. We’ve got a lot of just fantastic tunes.”

The concert is part of a series of performances for the orchestra’s 2021-22 academic season, all dedicated to the orchestra’s 100th year. With a century of intricate history to look back on, Brunet said the UI’s orchestra is one she feels proud to be a part of.

“I think it’s a pretty big deal,” Brunet said. “There are not a lot of programs with orchestras or university orchestras and even professional orchestras that have this quality in the country.”

Although it unofficially existed for many years prior, the orchestra’s university-affiliated beginning is dated to 1921. Katie Buehner, head of the UI Rita Benton Music Library, said the orchestra got its true start when its first conductor, Philip Greeley Clapp, arrived on campus.

“The idea behind hiring Clapp, who was not from Iowa City, was to bring a lot more formal training with him that would allow the department of music to establish itself as more of an academic discipline on campus,” Buehner said. “And so Clapp came in and did exactly that.”

Clapp was initially hired as the department head for the UI School of Music, which at the time only existed as an affiliated department under the College of Liberal Arts and Sciences. He did not conduct the orchestra until 1937, concentrating instead on establishing the academic focus of the music school. The Department of Music became its own school in the 1960s, Buehner said.

Over the years, the orchestra went through several eras of performances, with many notable conductors and composers. Buehner said that some of the orchestra’s “greatest hits” include the 1955 performance of Berlioz Requiem, Op. 5, performed under the direction of Dimitri Mitropoulos in the Field House to an audience of 7,000 — one of the largest audiences the orchestra has ever played for.

Buehner said recordings of many of the orchestra’s older performances are difficult to access, and the Music Library is collaborating with a company called The MediaPreserve to digitize archived performances so audiences can enjoy them for the first time in decades.

“We sent out 2,500 school music recordings, including the orchestra performances from about the 1950s to the 2000s to be digitized,” Buehner said. “We’re going to get to hear some of that history coming back to us soon.”

The orchestra’s first seven conductors were men, beginning with Frank Estes Kendrie in 1921, and ending with David Becker in 2020. Mélisse Brunet is the first woman selected to be the director of orchestral studies in the orchestra’s century-long existence, chosen in spring 2021.

Tammie Walker, current director of the School of Music, noted her enthusiasm for the orchestra’s future under Brunet’s direction. She said Brunet’s priorities align with those of the school, and she will bring changes to the orchestra that it has needed for a long time.

“This is a signature milestone for one of our major ensembles, and we’re especially excited that the 100th anniversary lined up with the hire of our first female orchestral conductor at Iowa,” Walker said. “She is embracing music of all styles, all cultures, and making really intentional choices to program music by underrepresented composers.”

Brunet said she wants to bring the Iowa Symphony Orchestra into future seasons with a contemporary perspective. One of her top priorities is to increase diversity within the orchestra’s programming, as well as to increase the number of collaborations in which the orchestra participates.

A piece Brunet said she was particularly excited to be performed during one of the orchestra’s most recent concerts was Five Movements In Color, by Mary Watkins, an 83-year-old Black composer whose work had never been performed by a full orchestra.

Ultimately, Brunet said the orchestra has come a long way in its 100 years, and that the anniversary celebrations have provided an opportunity for reflection.

“My goal is to really bring [the orchestra] into the future to make something that’s what the students need nowadays, and what orchestras should look like in the 21st century,” Brunet said.